Girls   Guys  Why Do They Call 'em That?

Looking back on how we dressed in the 60's is a fun-and often funny-trip into the past. These fashions were pretty happening, and in retrospect, the clothes and styles that were big then seem even bigger to me now.

I really like how sleek some of these were. Women's fashions were the best, and the advent of "pedal pushers" that became

the "capris" that are popular today, were a trademark of that indelible era. Like the furniture of the 60's era, the "Space Age" look was as popular in cloth as it was in wood.

Women's fashions took off like a jet in the 60's, and when the British Mod look came into the American forefront, everything was alive with color, patterns, style, and attitude. Unlike the garrish, and overblown styles of the 70's, the 60's fashions were truly innovative and rather striking. Go-Go Boots were another hot addition to women's footwear, and the birth of the mini skirt truly changed my appreciation for 60's fashion.

Flip It! What I loved the most about women's fashions were the hair styles. The 60's Flip was probably the signature hairstyle of the 60's. Like her pedal pushers, nobody wore a flip with such distinction as TV's "Laura Petrie" (Mary Tyler Moore) from The Dick Van Dyke Show. 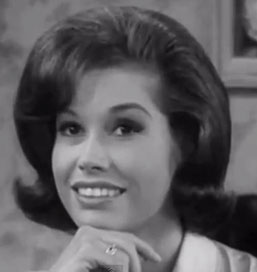 Big hair was in, but delicately so, and became the pre-cursor the huge hair/mane culture of the 70's and 80's for both men and women. I remember girls wearing the "Mary Jane" type shoes. They were extrememly common with either the short rolled socks, or the higher knee socks.

It seems like every girl in school was wearing these. I remember dresses and a button down sweater was also a popular look. 1964-65 were the years I really noticed guys' fashions changing for the better. When I was in school, I remember a lot of the styles that were in, and the styles that were out, and pity for the kids who didn't seem to know the difference. Plaid was big as were vertical stripes.

Short sleeve "surfer shirts" were very big. These were basically a pullover shirt with wide horizontal stripes. Sometimes they had a solid colored collar, but always the stripes. "Duck tail" shirts, and turtlenecks were the ultimate in cool (especially black turtlenecks worn under another shirt).

TV had a lot to do with how the fashions influenced us.

Rock bands were beginning to change, moving toward that "Mod" persona, both in sound and appearance. Bangs combed forward was a popular style for guys' hair. Toward 1965, longer hair (touching the collar and slightly covering the ears), was the fad. Groups like The Byrds, Herman's Hermits, The Animals and others were very powerful influences on me. Long hair was a tough one for my parents, and they never permitted it for us boys.

What are they called? "Desert Boots" were probably the most popular shoe in my school. Often they were out of my parents' price range, but around sixth grade I began to wear them to school. I'm really not sure where the name "desert boots" comes from, though I fear it may be a rather disparaging name concocted from the 60's.

In the Ward's Catalog, they were called "Chukka Boots". At one point in time, my brother, who had begun his freshman year in high school, dazzled everyone in our house by referring to them as "Jesus boots." My mother about came unglued and gave him a dire warning to never use a phrase like that again. Naturally, he never did, but thinking "desert", then thinking "jerusalem", I sometimes wonder now where the name actually came from. To this day, everyone I know calls them Desert Boots. Even some stores carried them under the title.

Using cuss words in my growing up years was probably one of the most dangerous things a kid could do. It really depended on the company you kept, but anybody could run and tell someone's mom, and that would be it for you. One funny memory I have is using a nickname I'd heard for the new Volkswagen Beetle: a "pregnant roller skate". I made the sad, and deadly mistake of using that particular terminology in the presence of my mother and a visiting friend. I recieved a pretty decent smack for that one. From that day forward, Volkswagen Bug was a perfectly good and acceptable name for that very unique car.