This story comes in two parts about one of the greatest things a boy could have in the sixties: an honest-to-goodness-I-ain't-kidding go kart!

It was around the time when autumn settled into the neighborhood, and leaves began losing their branches that I inherited a most valuable commodity: an actual gas powered go kart. My brother Pat, in his usual fashion of trading lawnmower motors, bike parts, radios and tubes, and whatever else he could get his hands on, acquired this beautiful gray racer for simply repairing a color television set.

Pat was my older brother, and I can't really begin this tale without first talking about him. Pat was a self-taught tinkerer who had the uncanny ability to fix almost anything. Whatever he fixed, worked for years after. How he did it, none of us really knew, but his reputation spread like wildfire. Pat was very big on bartering, and often wanted gadgets and parts to create his own inventions. There were many parts houses, scrap yards, and other businesses that he had a frequent trading relationship with.

From tubes to tools, Pat could fix almost anything electrical; he could also pick locks-any lock, and he fixed cars with the skill level of a professional mechanic at a very young age. The story of this go kart begins with the father of one of Pat's friends who needed his TV set fixed, and the repair estimate from a repairman was too high. In exchange for the TV repair, the man had a real engine-powered go kart in his garage in perfect running condition that was gathering dust. So, he and Pat struck a bargain. At first Pat was going to sell it for money for more parts, tubes, and other gadgets for his unique creations. Instead, he gave it to me. He had several mini-bike projects in the works besides. 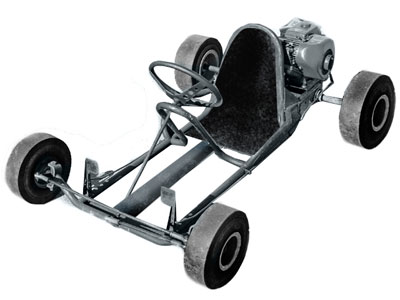 The go kart ran beautifully. It had a padded driver's seat, a real steering wheel with vinyl grip, and was spray painted gray. The driver's seat was supported by a rounded "roll bar" type brace with a plywood backing to keep the engine away from the driver. This machine was of welded steel with a gas pedal, brake pedal, and a really cool neutral shifter that permitted it to go once the driver was in the seat. It also had the fat slick racing tires that real race cars had.

It was a thing of beauty, and light enough so that I could pick up the front end and drag it by hand if necessary. There was only one hitch to this fine piece of racing engineering: my Mom expressly forbid me to take it out of our yard for public riding as she wasn't quite sure about the laws concerning go karts on city streets. As it turned out, she was correct in her assumptions; it was quite illegal for street use.

In the driveway I'd fire it up by grabbing hold of the bar over the seat and yanking the cord that started the motor. With a loud ripping blast, it sounded like a rebel lawnmower ready to leap forward and burn the asphalt spitting dead grass and debris in its wake. I'd soon become very familiar with the names "Briggs & Stratton" for that was the make of lawnmower engine that powered this baby. One problem remained: I couldn't ride it in our driveway; the driveway just wasn't big enough.

Then, one Saturday when Mom and Dad went on a long grocery shopping trip, I decided that it was time to take this machine out on the road despite the mandate from my parents.

The objective: the church parking lot about 1 block up the street. Pat and I reconnoitered the area on our bikes; nothing was going on at the church, and there were no cars in the lot. The building appeared completely vacant. Slowly, I pushed the go kart out to the street in front of our driveway. I put the shifter in neutral, went to the back, and pulled the cord a couple times. "K-chunngg--K-chunnngggg--VROOOOOOOOM!" I jumped into the seat, readied myself, then shifted into drive mode.

The go kart sounded like an angry hornet as it zipped down the worn-out asphalt of sixty-second avenue. Its max speed was somewhere around 25 mph and hugging the ground as it did, felt like it was cruising at light speed. I pulled into the church parking lot, gave it full gas, then ran crazy circles and figure eights. It was a bit chilly that day, and the wind in my face as the go kart picked up tremendous speed felt wonderful. Even the air, scented by neighboring fireplaces, and burnt gas from my machine's engine smelled perfect, and evoked an excited outdoor feel of high adventure and boyish thrill. The go kart was not a common toy; it was something that maybe one in five hundred boys had.

I zoomed toward the church doors, and then made an abrupt turn which the go kart handled like a champ. I zig-zagged, tore off in a straight line, then turned again with the precision of a pro race car driver. The sound of the engine seemed to echo in the autumn air, and before long, many neighbor kids arrived on the scene begging for turns on my gray machin. Permitting another kid to ride my go kart would have been the most stupid thing I could ever have done; it would have been so easy to drive off into oblivion, disappearing forever. No way was anybody else going to ride it unless we were in a place where there was no escaping with it.

I only had about four runs around the church parking lot before it became nearly impossible to avoid kids running around, trying to grab hold of the steering wheel to stop me. So, off we went, back home on the straightaway of sixty-second avenue, toward Clatsop Street and the safe haven our driveway. The adventure was great while it lasted, but it gave me a sense of what a famous celebrity must feel when going out in public. Mom and Dad never found out about the go kart adventure. The church hadn't a clue, and it escaped our neighbors' attention. It was all such a seamless, perfect adventure before "the kids" came.

The second part of this story happened in another southeast Portland neighborhood near seventy-fifth and Division Street. The track was the sidewalk that lined the houses on seventy-fifth avenue. It was a bright and sunny day in spring. This is the event that solidified my decision to get rid of it once and for all. I'm going to call this "The Governor Adventure."

A governor on a lawn mower engine is a device used to regulate or minimize engine speed. On this day, on our illegal venture out of the driveway, the governor got "stuck" in one position while I was driving it. The position: maximum speed.

I was already in the driver's seat when Pat pulled the cord to start the engine. My foot wasn't even on the gas pedal yet. As I shifted out of neutral, the go kart took off picking up speed like crazy as it zoomed down the sidewalk. The brakes didn't work, and my foot still wasn't touching the gas pedal. In essence, this crazy machine was possessed and acting upon its own volition. I had no control. Trees were zipping past me; I was screaming; Pat was running behind me like a maniac trying to catch up. This crazed go kart would not stop.

Finally, I saw The Watsons' house up ahead. They had a small, but very steep little incline in their front yard. I quickly turned into the little hill knowing that that would slow down the dgo kart long enough to bail out. It worked, and once I was out of it, I quickly turned it upside down. In the end Pat praised my brilliant decision to use the hill to slow it down, and to bail out and turn the kart upside down so it couldn't run on its own.

Again I escaped death in the sense that Mom and Dad never found out about this event either. How they never learned about it was amazing since maybe every kid on the street witnessed the wilding of that adventure. Problems in the pit, engine malfunctions, and driver unpreparedness were all signals that perhaps the go kart was not meant to be. That particular incident-and without much use on the streets, or neighboring parking lots-the go kart lost its appeal. In 1966, the gray machine drove out of my life almost as quickly as it entered, but the few months that I did own it were fantastic.