Comic Book Ads   X-Ray Specs and the Beyond   Be a Real Man, Learn Karate! 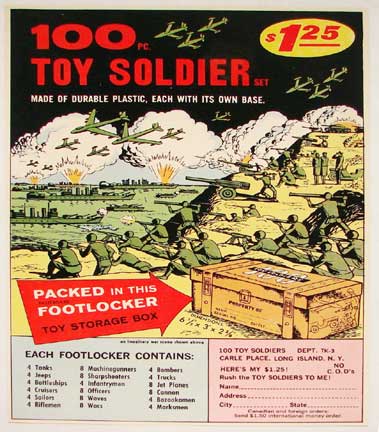 I couldn't believe these great offers!

Fantastic ads like these ruled the back of my beloved comic books with every issue. It seemed like everything was only $1.98 plus 50 cents postage and handling. I could understand postage, but handling? Oh well, that was the charge, and that's what we had to pay. Still, the offers were tremendous, and though I never actually bought any of these sets (due to lack of money), I would still like to believe that they were amazing.

As Army soldier crazy as I was, I never wanted to miss out on a deal like this, but unfortunately, I was never disciplined enoough to try and save whole $1.98, or even the $1.50 it took to get them. I loved plastic action figures, toy tanks, cannons, planes, boats, you name it. The Revolutionary War set was highly appealing. I can remember spending the longest time just drooling over these sets counting the pieces, and trying to imagine how great they would look all set up for battle.

"HERE'S WHAT YOU GET..."
I'm telling ya, these guys were brilliant at writing up their ad copy. They listed all the tanks, cannons, pill boxes, mortars, soldiers, etc. that came in the set to make it even more impressive. Every inch of ad space and illustration was taken up with everything important to a kid. What was even better was the fact that the Army set came with a German Army set as well! German soldiers always came molded in a sort of blue-gray color and the U.S. was always in green.
I really loved the backs of comic books almost as much as the book itself. That was the one thing that comics had to offer back then; they were fascinating from cover to cover, with no wasted space.


X-Ray Specs and the beyond...

I could barely resist some of these great gimmicky items sold on the backs of these comics. I wanted everything they had. I know that I for sure had always planned on getting the "Black Soap" since I always thought that it was so cool.

The most of these things didn't even fool me. I knew that there were no such things as "X-Ray Specs". Better yet, as hard as they tried to market sex to us kids even then, I knew I'd never be able to see through a girl's dress with those things. And what miraculous scientific breakthroughs showed up on the back of comics for a dollar? Sorry, but third grade had made me a much wiser human being than that. Real astonishing feats of science would cost at least 2 bucks, and end up on the back of an 80-page giant, not a 12-center.

However, some of these things seemed quite feasible hence the "Black Soap." Good gags weren't available at the corner store, nor were they usually carried in the department stores. These things had to come from another planet, and that's what I loved about the backs of comic books. They had the wierd stuff.

Needless to say, I never got around to buying any of the items listed on the back of comics. I also loved all the ads for the 8mm movies you could buy-especially the monster movies that I'd never seen before such as "The Phantom of the Opera" and "The Mummy".

Years later in the 70's, I met a new friend who'd bought these movies and said that they were okay, but they weren't the complete movies, only a few minutes worth, and showing only the ultimate (usually only the final) scenes. I still look back on these days fondly.

So, what were the deterrents to buying these items? 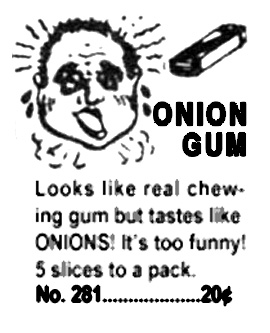 A. For myself, it was a series of factors. Let's use the Black Soap for an example. It cost 25 cents. That was 5 candy bars, or 3 candy bars and a comic book, or a toy off the rack.
B. Then you had shipping on top of it; Not the cost mind you, but the wait. The wait could take forever-even upwards to 6 to 8 weeks. Anything could happen in 6 to 8 weeks. Martians could attack the earth. (It was possible; I had afterall, seen it done in numerous films.)
C. But here is the granddaddy of all reasons: what if it just wasn't as great as advertised? Did things like that happen? Yes, they did, and more often than we as kids would care for.

Remember "Snappy Gum"? These never lasted long in class. I always tried to figure out how to make the snapper really come down hard, but all I ever succeeding in was breaking it. This was among those many comic book "lures" that almost had me convinced that I just had to have it. Fortunately, I acquired my first "Snappy Gum" from a neighbor kid who saw that it really had no value.

"Learn Karate in Just 1 Week!" Yeah, right. Even as a kid I knew it would take longer to master a martial art than just 1 week. I had it figured for at least 2.

I never even heard the word "Karate" until around 1964. I definitely heard the word "Judo". Everybody knew what Judo was. It was almost a household word. Judo was that thing where you flip people all around, upside down and backwards, then give 'em a chop! Learning Karate by mail was a commonplace 60's notion. After all, Barney Fife did it, as did the great man Luther Heggs!

My two brothers in the Navy had learned hand-to-hand combat which included a Karate and Judo. When they came home on leave and my older brother wanted to "wrestle" 'em, different things entirely transpired on our front lawn.

That was the first time I'd ever seen a human being airborne! I never had an interest in learning it then, nor did I want to be Charles Atlas. Army, Matchbox Cars, Creeple Peeple, and Ouija boards took up a lot of my time. Karate just had to wait.