One of my favorite haunts was the corner store. Every neighborhood had one. You could buy just about anything there. Depending on how big the store was, you could buy some toys and things of interest, plus fruits and vegetables. Some of these stores had fresh scoopable ice cream. I loved to buy kites in the spring and summer.

I'd buy a ball of string for a dime, and a paper kite for 15 cents. The plastic kites were 25 cents-a little more than I usually could afford to spend-but every now and then I'd pick up a cool plastic one.

I, like many other kids in the area, was well known to the proprietors of the stores. If I wasn't coming in to load up on candy, I'd be on an errand for mom or dad. There was a time when I could buy cigarettes for my parents if I had a note from them. The store owner recognized the handwriting of the parents. Those were the greatest of days when people were that personaland interacted with one another with that level of trust.

Penny Candy was the greatest bargain in the world. Some stores had more variety, and for those, I'd travel the distance to get what I wanted. Mexican Hats and Licorice Buttons were two very rare favorites that I'd do some serious traveling on my bike for. Our neighborhood stores carried them rarely, but other neighborhood stores would. 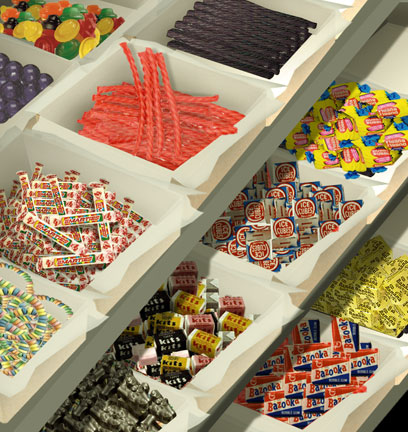 One store used to sell the both of these three for a penny. That was a great deal. I also loved licorice shoelaces, but they were very rare in my neighborhood. I had to ride a ways to find those as well. Anything licorice, chewy, or gummy was my favorite candy of all.

I always wanted longevity in my candy, things that lasted. jujyfruits, jujubes, and Dots were right up there on the list. Black Crows also. Pop was another fabulous thing! How could they come up with so many incredible flavors? Nesbitt's strawberry and grape were my official sodas of choice closely followed by Nehi. Things went better with Coke; I loved Pepsi; root beer was where it was at. All the greatest flavors captured in these wonderful glass bottles were available for only a dime, or 15 cents! Hires, Bireley's, Nehi, Nesbitt's, White Rock, Cragmont, RC, Dr. Pepper, what a wonderful world it was.

Comic Books were one of the greatest bargains ever. To this day my favorites of the old comic books came from Gold Key.

I loved them growing up, and read voraciously cover to cover, then started them over again. Sometimes I'd trade them back and forth with friends, then we'd trade back for something better, or different.

12 or 15 cents was a decent price for a comic book. I never really read them on the rack at the store; I couldn't concentrate knowing I was being watched. I always preferred to take them home where I could seriously dive into them. Among my favorites were the comics based on movies or TV shows. Twilight Zone and Outer Limits comics were wonderful, and they couldn't put them out fast enough for me. Turok, Son of Stone fascinated me because of the magnificent cover art that seemed to be above and beyond the norm for comics. Strong cover are was a Gold Key Comics trademark. 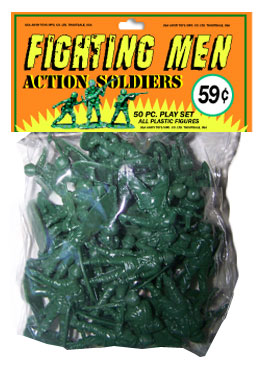 Cheap toys attracted me, and often the corner store would have a section displaying a small, but fairly interesting section that appealed to boys and girls alike. Usually it was the typical junk like jacks, Super balls, jump ropes, cheap dolls, and cheaper plastic cars. Every now and then, great figure sets would appear. I used to buy small bags of army men whenever I had a decent cash injection. 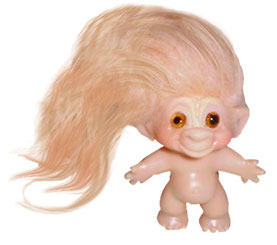 There was a time when I had the grand total of 39 cents that was burning a hole in my jeans. It wasn't enough to spend on any decent toys, but it was enough to purchase the grandest thing that I could think of: a three-row package of Oreo cookies. I couldn't even wait until I got home. I started eating them on the way home. Upon my arrival, I'd almost finished off one entire row of Oreos. One half hour later, I'd finished another row. By this time, I was feeling pretty sick. Still, I could not leave that last row untouched. Slowly I began to eat cookie after cookie until the entire package was gone. Minutes later, I was throwing up, and sicker than I'd felt in years. As an ending note, it was literally years, perhaps twenty or more, before I could even think about Oreo cookies again.

And now, with our world of strip malls, online shopping, and immediate gratification, the old corner stores are rapidly heading towards exinction. The memories that surround these little stores are small chapters of my life that are altogether important. The convenience store today has lots its charm. In their day, however, these handy little hangouts were more than just stores; they were special friends and good neighbors, and like both, they are greatly missed.