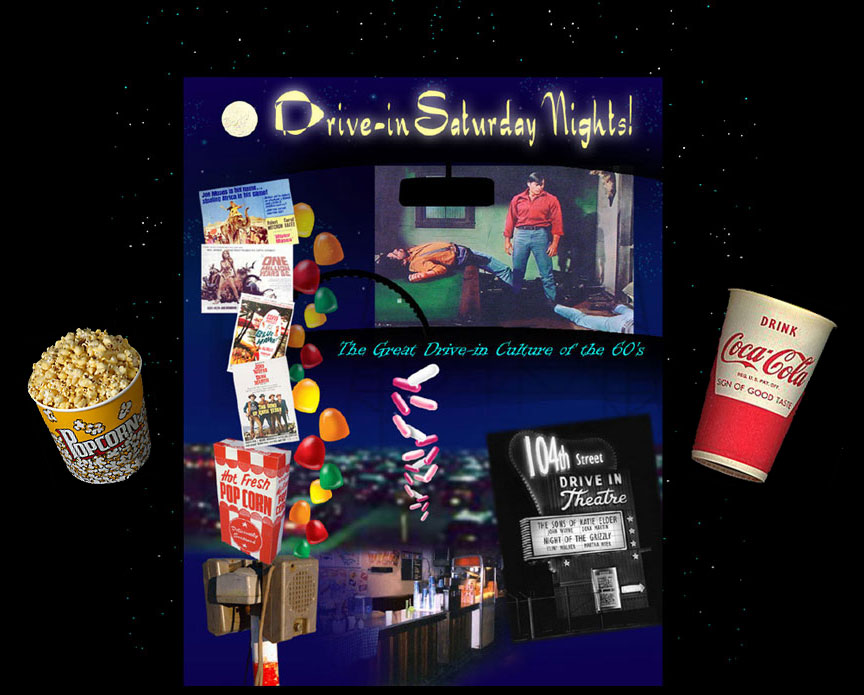 The great drive-in culture of the 60's was a unique and fascinating experience, and a very special treat on a Saturday night. I remember my Mom making this huge paper bag full of popcorn to put on the backseat between our feet. I loved watching her salt it, and the grease stains from the butter huge brown stains on the bottom of the sack.

We always went in our pajamas. That was the best part of all. Then, when the sun sank down below the rim of the trees and the majestic rectangle of movie screen, the action commenced.

There was also nothing like the snack bar. Between movies (yes, I'm speaking in the plural tense as in "movies") the snack bar was Grand Central Station. And was it any wonder? They had all sorts of candy, popcorn, ice cream and soft drinks. If you needed it, they had it. If you wanted to check out the girls, go to the snack bar. If you had to get away from your parents-snack bar city.

One of our usual haunts in SE Portland was the infamous (now deceased) 104th Street Drive-in on Powell Blvd. Occasionally we'd hit the Sandy Blvd. Drive-in, but the best, in my opinion, was the Foster Drive-in. They had acreage, and a huge snack bar. They also had a swing set, teeter-totters, and merry-go-rounds for the kids awaiting for sundown.

One of my favorite drive-in movie experiences was "Night of the Grizzly" with Clint Walker. I also enjoyed "The Longest Day" and of course, all the Elvis movies we went to see. "Blue Hawaii" almost put me to sleep, whereas "Roustabout" had me humming for weeks after. Elvis convinced me that the best life had to offer was a motorcycle, leather jacket, and karate.

When I was five, or six, we went to see "The Brides of Dracula." It scared the living hell out of me. I spent almost the entire movie trembling behind the back seat. We also saw "The Days of Wine and Roses" at the drive-in. Henry Mancini never sounded better than through a tinny drive-in speaker. 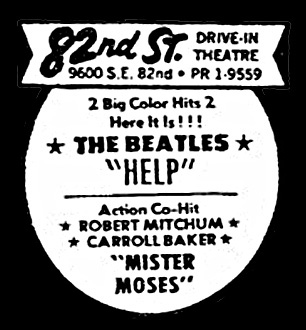 Probably my favorite drive-in memory is when My brother Kenny took me to see The Beatles' "Help!" The second feature was "Mister Moses" starring Robert Mitchum. I always considered that to be a wonderful thing for Kenny to do since he hated the Beatles. Kenny is an Elvis fan and could never understand the attraction of The Beatles, yet he went out of his way to take me to this movie because he knew I was just dying to see it.

My mom refused to let me see the movie; I can't remember why, but she was pretty adamant about me not seeing it, so he gave her some story about where we were going, and we went to it. "Mister Moses" was actually the better film, and far more enjoyable. To this day, I still love the Beatles, but have difficulty sitting through "Help!"

Every now and then, we'd go to indoor theaters. I saw "Bambi" in local theatre with my brothers. I actually wanted to see it, but at the time, it bored me out of my wits. Watching Jerry Lewis and Tony Curtis in "Boeing, Boeing" and Jerry Lewis in the "Disorderly Orderly" was a much better experience.