The real G.I. Joe craze hit me in the summer of 1965 with the "Deep Sea Diver" set that a neighbor kid had. To this day I can't remember exactly what the allure was, but right down to the diving bell helmet, the whole deep sea diving outfit was awesome. It didn't take long before G.I. Joe started becoming my favorite thing.

First off, G.I. Joe was absolute boy culture. The way I saw it was, Joe wasn't really a doll. Even though we all knew he was a doll for guys, it wasn't like the whole doll thing at all.

With G.I. Joe it was a matter of putting on accessories like ammo belts, field packs, flame throwers, and helmets to make him ready for action. He wasn't a doll being dressed up; he was a soldier being readied for action.

But as hard as I could, I could not argue the truth. Secretly I knew that all of this added up to one word: doll. No more could I laugh at girls and their Barbies. There was absolutely no distinction between Barbie's mix n' match outfits and Joe's camo fatigues or scuba suit. Dolls were dolls. The best way to think about Joe was like one of my models, and the rest is history.

I loved every single issue of G.I. Joe and happily paid for each and every one from my own personal budget. The action soldier was great in his olive drab fatigues; the action marine was probably my favorite with all the camo. The action sailor would account for everything involving water, and diving below the surface, while the action pilot had really cool accessories like his jump suit, life jacket, and raft.

was the most fascinating of G.I. Joe sets that I can remember. The sea sled was a close second, but the deep sea diver was extremely cool. It was the summer of 1965 when I first became acquainted with this set.

Sidewalk surfing was the craze, and The Beatles' "Help!" was commanding the air waves with their usual onslaught of hit songs. The Byrds released their version of "Mr. Tambourine Man" and it was magical. The Beatles' "Ticket to Ride" had the same familiar guitar riff, and all of that jingle-jangle 12-string picking takes me right back to those hot August days.

A neighbor kid had the deep sea diver and I remember wanting one so badly. Many of us would make our daily sojourn down the dirt road hill shaded by the canopies of several trees that led us to Eastport Plaza. Albertson's sold ice cream cones-2 scoops on a sugar cone- for a dime. Slurping down a chocolate chip, or raspberry delight, we'd often venture off to Pay N' Save to check out the latest G.I. Joe armory.

were the coolest things ever. 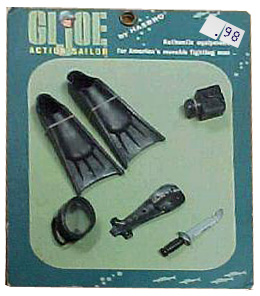 Hasbro really had it together in those days. For the lofty sum of 98 cents, I could buy small, but great accessory packs designed specifically for every branch of service. The smaller accessory packs were usually something like a machine gun and ammo box, or frogman mask, tanks and fins. The small packs were just as enticing, as the larger ones, except the larger sets had one big thing like a tent, or sleeping bag, accompanied by a few smaller things such as mess kits, canteens, or rifles.

One of my favorite things - weather permitting - was great to set up backyard battle scenes. Sometimes it would be a simple bivouac area with the tent, machine gun, sleeping bag, mess kit over a fake fire, netting and whatever else I could think of. Setting up battle scenes were the most fun I ever had with these figures. G.I. Joe gear was my favorite part of the toy and everything was unique and utterly fascinating to me. I used to dig out machine gun nests in the backyard and stack the sandbags around them for the tripod machine gun. I loved creating my own G.I. Joe battle scenes.

The G.I. Joe Action Pilot brings back wonderful memories. Maybe it's because it was the last in the Joe series that I got. By this time, the earth had rotated, and Christmas was just around the corner. The colors of the box are absolute memory triggers for me, and conjure up The Beatles' "Day Tripper" and Mountain Dew .

My G.I. Joe collection began with the action soldier, then the marine, and finally the sailor. When I had the money, I got the action pilot. I think I liked collecting the various accessories more than anything else. There was a store called Bazaar on 82nd and Division Street where I bought my first G.I. Joe. He cost $1.98. The larger accessory box-packs were also $1.98. Larger accessory packs were usually very exciting for they had one very important thing that added to the collection. I can recall buying a set that included a life raft, and set with a camo tent.

The "Bivouac" set that came with the green sleeping bag, mess kit, ammo belt, and rifle was my first set. After that came the poncho, field phone, tent, etc. I just started picking up stuff little by little. I had so many of these accessory packs camo, and non-camo.

Still, my favorites were always the water related gear like the " "Deep Sea Diver" and the "Sea Sled."

was my second favorite Joe accessory. However, the thing wouldn't work! I had to return it twice to the store. The second time, they were "out of stock" and would have to re-order, so I just kept it. My thinking was, that the third one would probably be bad too. Also, it was too big to use in the tub. The commercials made this thing look fantastic, especially with all the underwater shots and all, so I figured I could at least play with it in a backyard pool or something.

My last "Big Set" adventure was with the "Space Capsule" . I don't have too many memories of this one except that it was pretty darned cool. The problem with the "big G.I. Joe" sets or toys was the fact that they were usually too big. As for the space capsule, it became extremely difficult to imagine being in, or have any play time in outer space. G.I. Joe was a solider; it was easy to mock battle scenes, beach heads, or assault hills. Floating around in outer space was different. As a kid, I just wasn't prepared for outer space. There was just nothing to do out there except float!

I acquaint a lot of my memories of G.I. Joe with the "Batman" series that came to TV in 1966 . I remember being totally fascinated and equally revolted with the show. It was all tongue-in-cheek during a time when I had no idea what tongue-in-cheek was.

I wanted my Batman to be serious. Still, we all watched it, but mostly made fun of it in school. Secretly, my favorite part about Batman was his car, the Bat cave, and Batgirl. This would be my first real introduction to Yvonne Craig, and Yvonne was never a disappointment.

We lived in the house featured in this photo set on S.E. 75th between Powell and Division. Some of my strongest 5th grade memories are on this page. During this period, I went to James Youngson school , and my teacher's name was Mrs. Papparini.