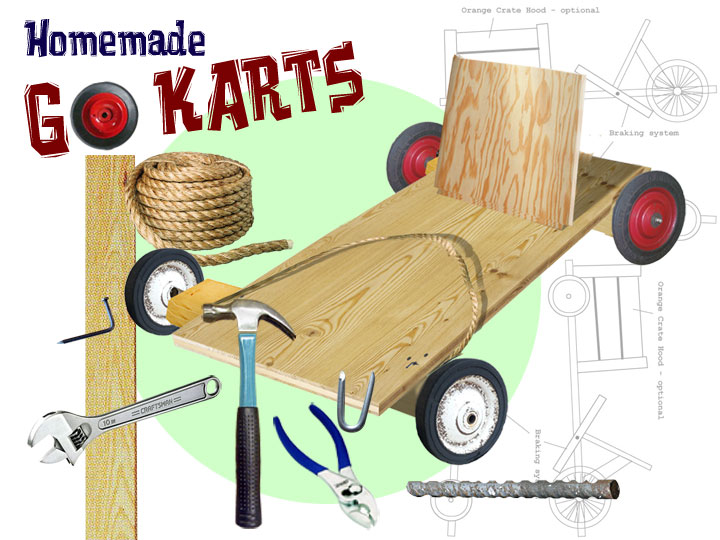 During the summers when looking for newer things to fill our days, many of us guys built our own street go karts. In my dad's garage, hammer's pounded and dust flew as we worked diligently trying to create our ultimate street machines. Our garage was where cars were constantly being worked on. Remnant oil stains on the cracked concrete floor mixed with dust and dirt became a map of black grit. Dirt, dust and scraped knees were the hallmarks of what made us guys deservedly intrepid. We were proud of our dirt; we lvoed our smudges, and scraped knees were badges of honor; All of this and more painted portraits of boyhood, an elite group to which I proudly belonged. 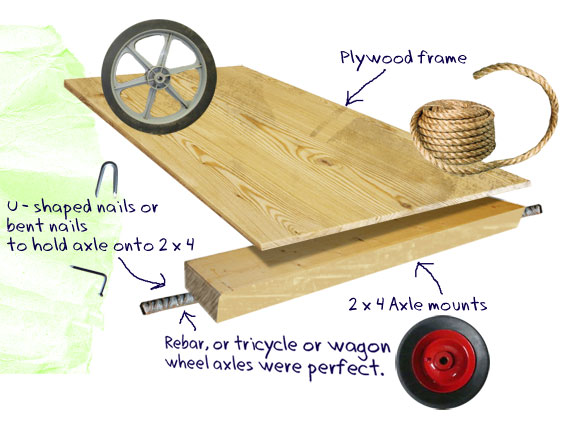 Don't just stand there, grab a hammer.These wooden street machines were more fun to build than to actually ride. A certain degree of design and engineering prowess was required for their construction. Most types of wheels worked, lawnmower, wagon, tricycle and baby buggy wheels were the easiest to find as somebody usually had at least one of these contraptions in their garage, or out behind the house. If not, my brother Pat had an endless supply.

Our garage was well known in the neighborhood as being home to probably every tool ever invented in the world. My dad's hobby was tools, and he had a plethora of saws, wrenches, screwdrivers, hammers, and a healthy stock of everything else. The grinding cadence of hand saws cutting through two-by-fours and the metal clang of tools on the concrete floor were familiar sounds. Many kids' dads had plenty of plywood and two-by-fours lying around. If we weren't in the garage building our karts, then we were out on the sidewalks displaying our skills for the neighborhood.

About dad's tools... None of us were ever allowed to use dad's power tools. We often used hand drills to drill holes, and good old hand saws to cut wood. These were much harder to use, but we got the job done. 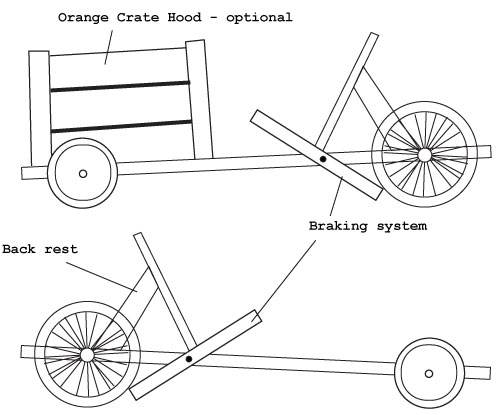 We guys tried our best to come up with the most original designs, but they usually followed a set pattern. A good street go kart began with a plywood platform. Underneath the frame were two longer two-by-fours that served as housings for the axles-front and rear.

Rebar worked great for axles, but if none was available, there were other things to use, such as sawed-off tricycle axels. Wheels were then inserted into the axles, and held in place with a cotter pin that slipped neatly through the little hole on the end.

The next step called for a steering column. Some of us guys relied on the most simplistic method of all: a long nail pounded through the base and front axle two-by-four. This was method was for the most impatient, or least experienced kart builder. However, when a lack of supplies or technology confronted us, this was often the go-to method. The best method of course, was to use dad's drill, and drill a hole through both, the insert a long screw finished off with a hex nut to secure it.

For a steering device, rope was the most popular thing, nailed with U-shaped nails to the outer edges of the front axel, or simply tied around it. In lieu of rope, our feet worked perfectly, and usually ended up as the fall back method of steering these fantastic street rods. One good push to the right turned us left, and one good push the left turned us right. Complicated, ain't it?

The final phase was the back rest. The back rest was likewise made of plywood, or anything else usable. The back rests were supported by any type of extra wood we got our hands on. Building these wooden go karts was relatively easy, and didn't take very long. Riding on them was more of a challenge. Like some brilliant designs, they looked good on paper, but sometimes failed on the open road (sidewalk, or barely used side road).

Unlike Ford, or General Motors, we had no way of product testing our vehicles. The true test of endurance was on a steep, dirt hill which we had plenty of then. The best way to test out these Go Carts was to find either the heaviest, or most gullible kid on the block. Often, the two came in one package. My Go Carts always held up well due to my reinforcing the rebar axles with plenty of U-shaped nails. We usually held There was one very steep dirt hill behind our house in one neighborhood that was gravel and bumps, where one was guarranteed to either pile up, or become a national hero. Of course, each of us guys just had to take on that dirt hill... where two of us racers, side by side, would ride these babies down hill to see how well they were built. Speed, not safety, was the determining factor.

Pile-ups were not uncommon. If a guy rolled, piled up, or went straight into the blackberry bushes, he failed as street cart engineer. There was an art to driving one of these things; foot steering was a matter of agility, timing, and overall skill; too much steer in any direction could cause a pile up; too much alternate steering caused jack knifing. Gradual and easy steering was best. In fact, steering your machine was the true test of being an expert driver.

Brakes? What are those? Hand brakes could be built, but they were never trustworthy or dependable. They worked horribly since they were basically just wooden sticks either nailed, or bolted to the side of the cart near a back wheel. Their primary task was an attempt to slow the wheels down. On a smooth straight road, they worked okay; downhill, forget about it.

For the most part, we just rode these things around the neighborhood sidewalks. There were some great days though when a group of kids would meet at the steep dirt hill for some serious drag racing. Girls often came along to watch. They chomped on Freeze Pops, or sipped soft drinks until boredom got the better of them. For us guys, the racing and maneuvering was the most fun and challenging.

The only drawbacks to these, was again, finding somebody willing to push you around the neighborhood. You had to trade off to make it fair, but it was by far a better thing to be the driver rather than the engine. By the days end, it was not uncommon for us to tear them down, re-think, and re-build. That was, after all, the real joy in them, building and coming up with the ultimate design.

I was elated a few years back to see a young father pushing his son along a back street in one of these! I didn't think anybody was doing this anymore, and it was a real pleasure to see.