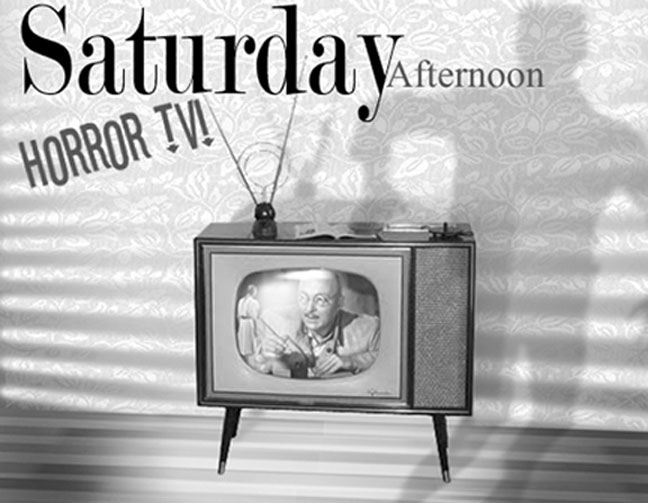 One of the things I miss so very much were those Saturday afternoon horror movies on channel 12. Truthfully, they weren't limited to just Saturday afternoons, but that was how I remember them. There was nothing so perfect as sitting down cross-legged on the floor in front of the old black and white TV and fidgeting with the rabbit ears to clear as much static as possible. If life was particularly great, my mom would give me a 4-pack of soda crackers to eat with the movie. (Remember how they used to come in squares of four?} Then it was just a matter of waiting for the commercials to end so I could get on with the watching.

Life seemed to be as black and white as the TV. It's odd how I can remember the colors of life as they accompany the various memories I have of it.

In summer, my memories are strong and vivid, breathing and full of life. In the winter they seem gray, tinged with browns and earth tones. The same holds true with remembering these old horror movies on TV. Their black and white have seeped into my recollections embracing every nuance of memory with a perpetual gray scale. And that's fine with me.

Our living room was frilly and mom-like. I recall those old scratchy sofas with the intricate patterns. It was fun to sit on the floor and watch TV, even better with my brothers. How handy it was to have somebody to punch when the commercials came on. (I'm bragging falsely here. I was the youngest, and generally the primary victim of commercial break assaults). Even the TV's had such style, shielded in a nice wooden cabinet, and presenting themselves as something spectacular, like something that is meant to be admired, rather than merely operated. 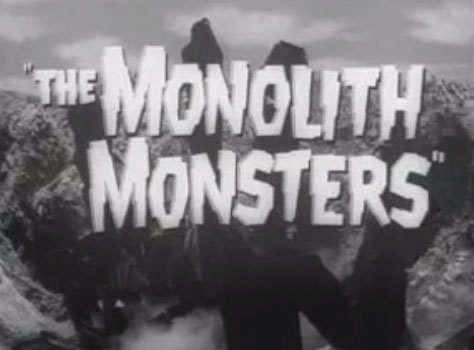 That's the difference between then and now. Those TV's had class; our modern flat-screen-high-tech-can't-do-it-without-the-remote-high definition sets are great, but they do lack style. The old TV's were like living room gurus. We all gravitated toward the center to listen to its teachings. As they sat majestic in their consoled bodies, rabbit-eared for the divine reception, they gave us miracles. The television was command central; from it, we received the gifts of westerns and horror, comedy and music, action and drama, and for our moms: organ music soap operas.

Some of my best friends were the old monster movies that circulated in syndication in the 60's. They were dependable friends, and you could count on them to visit at least twice a year. Some of the more memorable works like "Attack of the Giant Leeches", "Attack of the Crab Monsters", "The Killer Shrews", Teenagers From Outer Space", and "Horrors of the Black Museum" were pure classics. You can't argue brilliant scientific dialogue such as the following: "surface readings are above minimum requirements".

Many of these classics were the brain children of Samuel Z. Arkoff and James H. Nicholson of American International Pictures (AIP). These films were created on shoe string budgets, on the fly, and scripts were usually written around the posters or ads! I still love these pictures today, and feel so fortunate to have grown up when AIP was at its peak. Largely, these films were produced to get teenagers out of the house and into the drive-ins where three or four features were lined up in one evening.

Among some of my most beloved of these films are: "Fiend Without a Face", "Invasion of the Saucer Men", "The She Creature", "I Was a Teenage Werewolf", and "War of the Colossal Beast".

I also remember Monster cards, and my brother used to collect them. When he got tired of them, he gave them to me, and I cherished these cards. Roger Corman also worked with the AIP team as a producer/director. The American International Pictures horror drive-in movies have moved on to horror film classics. Watching them now is still fun, but hard to believe that they could have cost any more than $25 to produce. These classic films often lacked the best effects; collies used as giant shrews; the shadow of a lobster was the "gargan" from "Teenagers from Outer Space", and obvious toy vehicles were used when creatures picked them up for throwing or crushing. 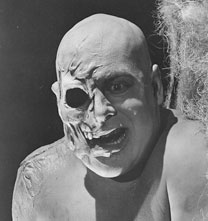 A Salute to William Castle 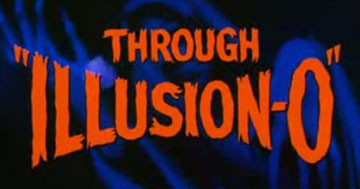 Next on the hit parade of horror was the great, the immortal William Castle. Bill knew what kids liked, end of story. Plus, he was the inventor of all those great movie theater gimmicks to scare the hell out of people watching the movie. Floating skeletons, seat buzzers, audience participation, and 3-D were among his box of theatrical tricks. With his classic "Mr. Sardonicus" (which creeped me out for the better part of a year), the audience was given the opportunity to give a "thumbs up, or thumbs down" guilty/not guilty verdict to the title villain. William Castle was a genius, and his movies are incredibly entertaining to this day.

Venturing away from horror and focusing on the thriller, Castle gave us yet another unforgettable entry with 1965's "I Saw What You Did". During my growing up, telephone pranks were very popular, and this movie put the lid on that idea for awhile. Teenage Girls Libby and Kit, through misadventure, find themselves dialoging with a real life murderer over the telephone. Saying the words "I saw what you did, and I know who you are," probably wasn't the best phone gag. Kit was played by "The Virginian's" ever-enticing Sara Lane whose throaty voice and nice-girl persona made her far more memorable than her intrepid bubble-headed girlfriend. John Ireland is the killer and Joan Crawford appears briefly as his possessive victim.

"I Saw What You Did" is actually a great movie, and I remember liking it very much. It has all the genuine scares of the typical William Castle horror movie only in thriller mode. It wasn't enough that the ditzy girls had this guy on the line, they get drawn into his little trap by his pretending to be "flattered" by them. With that said, the girls decide to call back, then venture a bit further into his personal life, and, well, you get the idea. 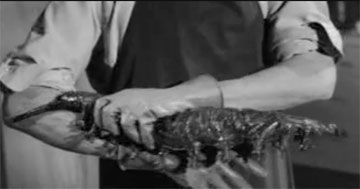 "The Tingler" is probably one of the strangest, and most bizarre of Castle's creations. The weirdness, dark comedy, and shock fright all blend together for a batch of the oddest horror film I think I've ever seen. The movie enjoys a particular notoriety from the LSD sequence where Vincent Price injects himself. Interestingly, at the time, LSD was still highly experimental, and legal. And as Vincent goes on a trip, so does everyone else! It does have a marvelous color sequence featuring a bathtub filled with blood.

As for the "Tingler" itself, it looks like a cross between a centipede and a spinal column complete with vertebrae feelers. It creeps along like an insect, attaching itself to the spinal cord, becoming a part of the body. The Tingler feeds on human fear. The only way to kill it is to release that fear, by SCREAMING, SCREAMING, SCREAAAAMMING! 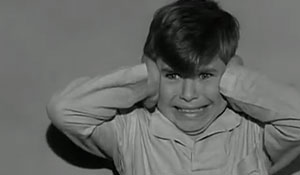 The movie "13 Ghosts" was quite the original hit featuring-that's right-13 ghosts! Better yet, they were in 3-D. When you put on the 3-D glasses, you not only saw ghosts floating before you, but you saw them in "Illusion-O" color. But you didn't need the glasses to see the ghosts. Having inherited a creepy gothic house, Dr. Zorba-with kids named Buck and Medea-proceed to experience a series of ghostly hauntings witnessed through a pair of experimental glasses. 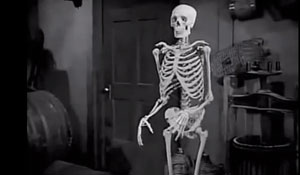 "House on Haunted Hill" was the perfect Halloween movie hands down. Featuring none other than the master himself, Vincent Price, The chills were plentiful. These movies were meant for kids and teenagers, and William Castle's gimmicks and innovation make him my favorite horror film master.

Seriously folks, look at what Roger Corman has been able to do with Edgar Alan Poe, some dry ice, a few dollars, a great deal of style and flair, and determination. Roger Corman was a sixties signature. To this day I can't even think of Poe without first thinking of Corman. His Poe classics were an integral part of my growing up and have only improved over the years through reruns on television. Though his Poe series have enjoyed strong script embellishments, I feel that the stories have improved. They are much easier to understand, and appeal to the younger people they were geared for. "The Pit and the Pendulum" Vincent Price was so perfect as the demented torturer that he made my blood run cold. The beautifully atmospheric interiors, sets, and exterior shots of the stormy castle on the ocean cliffs are all suitable for framing.

"The Masque of the Red Death" was one of the more visual pieces, though I enjoyed the comic book much better than the movie. Though incredibly atmospheric, the movie tends to drag in places, though notably revived the by the lovely Jane Asher's famous bathing scene.

I did enjoy the mutated townsfolk in"The Haunted Palace". This was actually one of my favorite of the Corman productions.

Roger Corman directed some of the greatest classics I can recall. "The Little Shop of Horrors" was one of the first that ever made its way to our TV set. One of my favorites was "Attack of the Crab Monsters". My brother first saw it in a movie theater and complained of how corny it was with the "crab monsters" having stove pipes for legs. Still, the movie intrigued me, and as a kid, scared me.