When I think back to the days of putting these models together, I remember really loving the instruction sheets. They were an experience all their own. The drawings were far different from the paintings on the boxes. They resembled the actual model peices more than the box art did. I also really enjoyed the fact that they gave a paragraph of history about the monster that was being assembled.There was a black and white reproduction of the box art. This seemed natural, for a good majority of the world--especially on television--seemed black and white. I really loved reading the histories of my favorite monster characters. Sometimes these histories contained more information than the movies. Half of the fun of instruction sheets was that they were meant to be as entertaining as possible. When I was a kid in the early 60's, and saved up my allowance money for a month to get enough to buy 2 models from our local Pay N'Save, I wanted to cherish every aspect of these kits that I could!

On the instructional part, it says basically to "not be in a hurry" and take your time. Did I ever take my time? No. I was way too excited about getting started. The next step was to get glue and paint. I could buy the glue, either Revell or Testor's regular airplane glue, at the local Food Fair down the hill from us. However, I always got my glue and paint at Pay N' Save, because Food Fair didn't carry the paint I needed.

Painting the models was easy enough with the painting instructions on the kits. 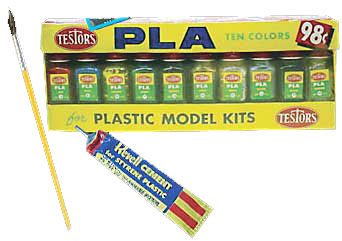 I would generally get the 8-pack of Testor's Enamels that came with a brush and thinner. I tried my best to follow the color instructions to the letter, but sometimes I just painted things with the colors I liked the most. 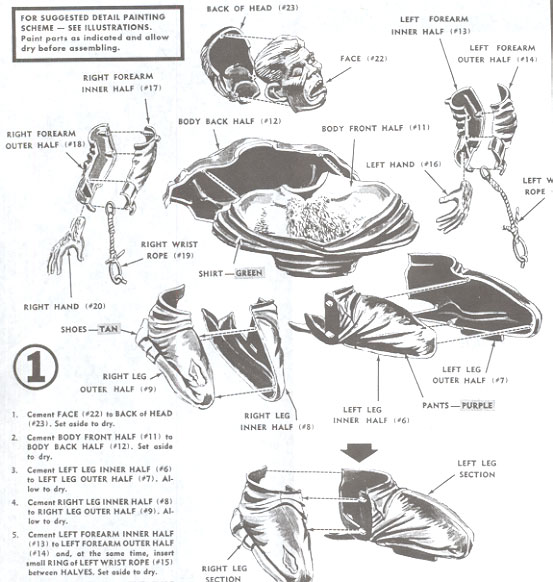 Paint thinner was another story. Being locked up in a small room with the smell of paint thinner and model glue is a great memory. No, I didn't get high off any of it, but those smells today will bring immediate memories to mind. 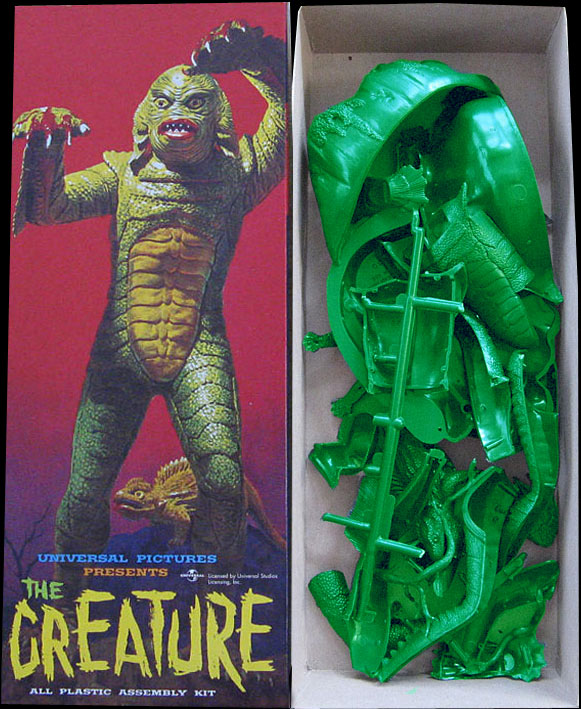 In 1965 I got The Creature model. It came molded in a really cool green plastic, and I spray painted it with metallic green paint that my brother Pat used for model cars and bike parts. I loved that green lizard creature that went with the base. Aurora Models always made sure that there were plenty of cool base accessories.

"In the beginning of time as the gasses cooled, the planet earth became covered with oceans. As the waters receded and continents were formed life moved from the water to the land. From its primeval slime 150 million years ago came a creature so horrible as to be unbelievable..."-from the history panel of the Creature instruction sheet.

Handling, sticky-not-quite-dried parts that sometimes stuck to instruction sheets was enough to give my fingers a second skin of dried glue and paint. 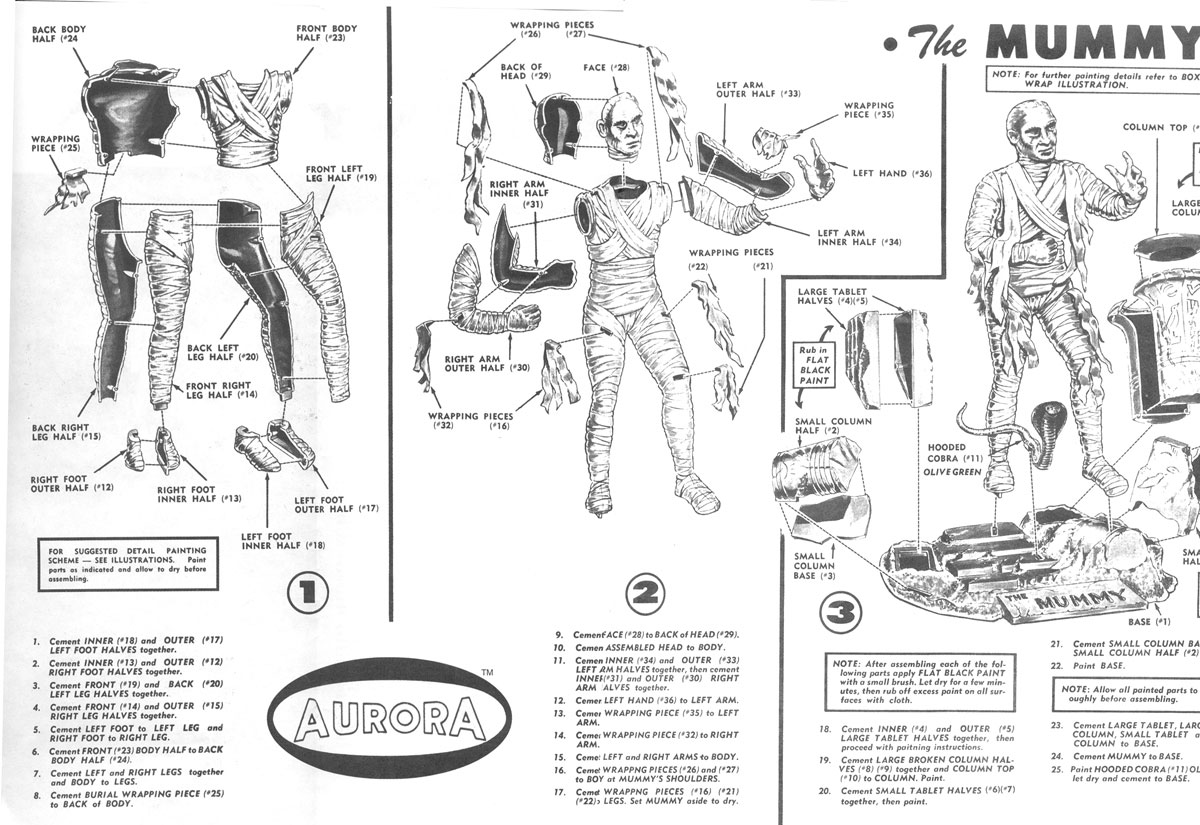 I can recall with such clarity, sitting around the coffee table covered with newspaper, or some work area squired away just for me, the smell of the turpentine and paint thinner. The feeling of dried paint and glue all over my fingers was indeed a feeling of something accomplished. 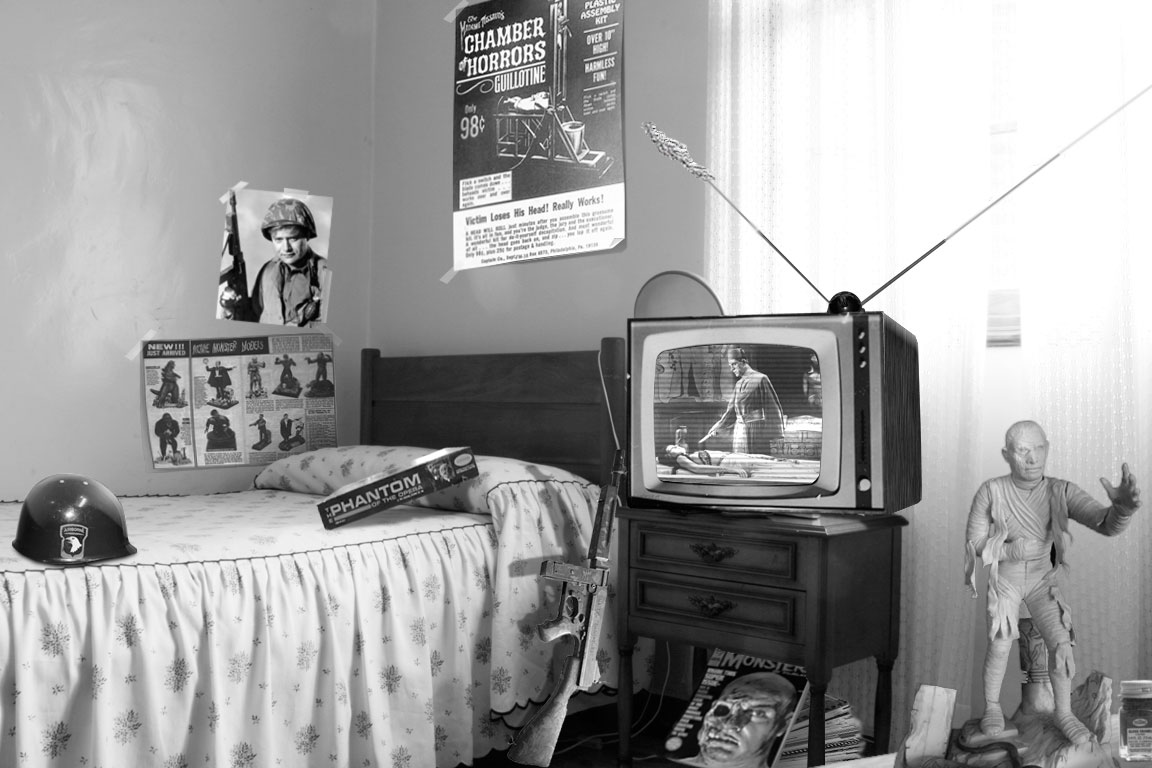 Handling, sticky-not-quite-dried parts that sometimes stuck to instruction sheets was enough to give my fingers a second skin of dried glue and paint. It was a true feeling of something accomplished.

I can recall with such clarity, sitting around the coffee table covered with newspaper, or the folding card table in my room, studying the instructions before beginning. The smell of the turpentine and paint thinner, is a great memory, and also reminds me of the days of doing paint-by numbers.