Based on the character created by Earle Stanley Gardner, Perry Mason is a legendary lawyer-sleuth who always triumphs in the courtroom. Working with a tight-knit group consisting of one super hero-Paul Drake and one super heroine-Della Street, Perry manages to win each and every case. Well, almost.

And though he holds the law in sancrosanct, Perry manages to skirt its very boundaries in order to suit his own needs. Perry's immediate allies are: Paul Drake, super detective and Della Street-not only a girl Friday- but a girl Saturday through Thursday as well.

I grew up with this show.

Hearing the opening power theme brings back vivid childhood memories. "Perry Mason" was a dependable syndicated series, so much that in the city of Portland, Oregon where I grew up, a person could schedule years of activities around its time slot.

The show continues to play to this day in the same time slot here. In fact, you can visit a local Les Schwab tire center, and Perry plays on the TV.

Their Lifestyles: Perry, Paul, and Della work around the clock;

they never sleep; they never stop to eat, and when they do, they can't finish a meal without interruption. In fact, Perry can't take a vacation anywhere in the world without ending up in that township's courtroom. Paul is called away from numerous poker games and hot dates, and Della, well, this poor girl doesn't seem to have any life outside the office.

The Perry Mason formula: The first twenty or so minutes of the show are spent building up to the murder of someone we grow to hate; someone who deserves their fate. Then, Perry and Paul usually stumble upon the body-quite accidentally-and the victim is usually connected to Perry's future defendant. Naturally, the defendant likewise stumbles onto the scene and manages to get his or her fingerprints on the murder weapon. After that, away we go.

Like the victim, the defendant is usually served up to us on a silver platter.

It's then up to Perry Mason to wipe their slate clean. In doing this, he enlists the capable help of his sidekick and private investigator Paul Drake. But wait, there's more. Enter Della Street. Della takes the confidential notes, controls all the paperwork, gives occassional neck rubs, makes the coffee and sandwiches, and generally coerces Perry into taking on destitute, or helpless clients.

Meanwhile, Paul Drake usually slurps the coffee and eats the sandwiches while Perry goes to work mapping out a series of landmines and deceptions to throw the D.A. Hamilton Burger off track. Perry, an officer of the court, usually straddles the law working barely within its confines while making jackasses out of the district attorney's office and the police department.

There are actually 3 cases that Perry Mason didn't win completely, or without some unusual circumstance.

In the case of the "Deadly Verdict", Perry loses the first time around (in the beginning of the show), but wins on re-trial. In the "Terrified Typist", his client--or shall we say--supposed client really is guilty, so Perry gives him up to the court. He has a technical win, but not for his original defendant. In the "lost cases" category, this one is very murky.

In the "Witless Witness", the show begins with an unknown loss for Perry. We don't know if his defendant was tried for murder or not. In any event, it's never resolved, except for the fact that Perry lost. In my opinion, this is the only episode where Perry truly loses a case.

One of the things that really stand out to me on this show is the casting of the character actors. There are several minor league actors that resemble major league movie stars. The first time I saw this I thought it was coincedence, but it happened far too often. There were many more than pictured here, but these are just a few of the "look-alikes" that appeared on the show. 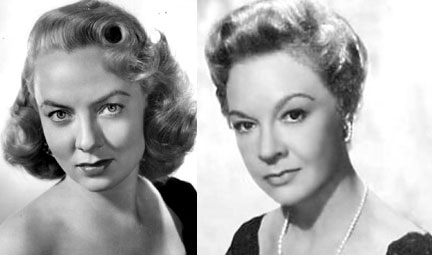 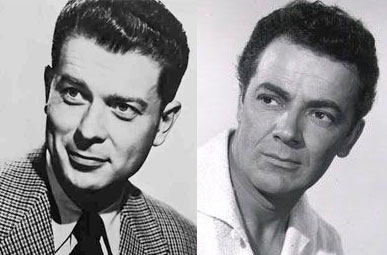 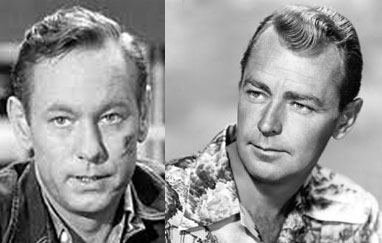 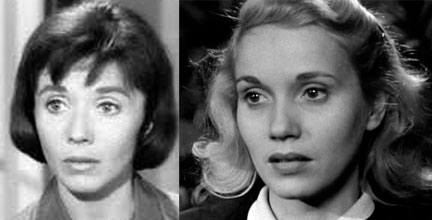 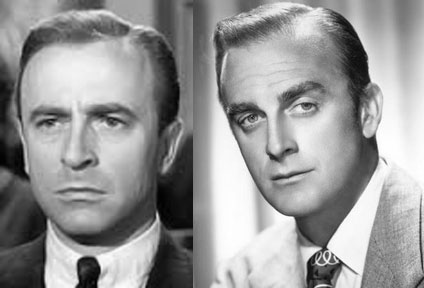 "Perry Mason" premiered in 1957 and hung on until 1966. I love Perry Mason. This show carries so much retro flavor and is so exquisitely entertaining in the process, that I know I'll be watching it til the day I die. It's one of the only-if not the only- show I can think of where I love all the characters. There isn't a one I don't like. Each has their job, and they do it superbly.


Lt. Tragg's job is to annoy us, and he's a champ. He always manages to show up and confiscate valuable evidence that can really help Perry's case.
Hamilton Burger's job is to throw courtroom tantrums while constantly trying to harangue perry on courtroom ethics, and bring him up on supplemental charges of some sort or another.
Della Street's job is to back up Perry in every possible way. She does this by sneaking into apartments to search for clues, and sometimes takes on the part of somebody else to get what she needs. Her loyalty is incredible.
Paul Drake's job is to find the most intricate details about someone, then flop into one of Perry's office chairs with his feet up, whilst tossing an envelope of goodies over to Perry. Occassionally he's called upon to strong-arm, or subdue foes.

Perry Mason is a true original, though he's been copied, re-worked, and re-invented for decades to come. Perry often waives his fee for nearly destitute defendants. Perry often utilizes the Drake Detective Agency even for the clients that can't afford such luxury. He often squirrels his clients away in hotel rooms while he figures out how to handle the law.

Perry sometimes happens upon the roughest adversaries who try their best to intimidate him. He then re-directs their intimidation with a refreshing in-your-face style that always shuts 'em up. There seems to be no other weapon as menacing as his threats of "We'll see what you have to say on the witness stand." Other pleasantries include "It's only a rat race if you run with rats", and "It always takes a worm to catch a fish". There's no doubt about it, we could all use a "Perry" in our lives.

Pure class, end of story; Della loves mink and having a gentleman escort her to dinner.

Della is the thread that holds the Perry organization together. She accepts Paul Drake's flirty compliments in stride -"Good morning, Beautiful", and handles many of the oddest, and toughest jobs Perry dishes out.

Della has posed as a potential model for a crooked drug-smuggling agency. She also posed as a supposed amnesiac's lovestruck wife giving him kisses and hugs with reckless abandon. She's managed to get on Burger's bad side on occassion (well, not such a feat after all), and she adds a long-missed woman's touch to a very professional office atmosphere.

"Perry Mason" is a retro TV show, representative of the times. Della Street was your basic coffee-in-the-kitchen secretary. She was a stereotype during a time when stereotypes were highly pleasant and dependable portrayals.

If I were to ever have a favorite character on this show, it would be Paul Drake. Paul looks good in light colors. He usually wears a light colored suit, probably to match his graying hair. He's a master at digging up the dirt on all the right people doing all the wrong things. He's capable with what looks like Jui-Jitsu and possibly some karate.

Paul intimidates, and is unitimidated. He's also a bottomless food pit, being forever "hungry". He refers to Della as "Beautiful", and provides light comic moments.

Paul can quite possibly steal the show. He's always on time with the goods, always professional in his demeanor, and has his own "Drake Detective Agency." He also has a keen eye for the ladies. Paul Drake pretty much has it made, though working for Perry Mason, he gets very little time off.

Hamilton Burger believes in justice; he just wants it his way all the time. It's understandable since he always loses to Perry. The only thing stopping Burger from being a top prosecutor is his stubbornness. Poor Burger can't seem to see the forest for the trees. He assumes way too much, and therefore falls through Perry's legal trap doors everytime.

Hamilton Burger is no angel either, and manages to skirt the law as well by hiding witnesses, and at one point, figures into a scheme to tap Perry's phone for information. Still, through all of their animosity and courtroom sparring, Mason and Burger truly respect each other, and, beleive it or not, like each other.

Lt. Arthur Tragg is a gifted detective and wise guy.

He's usually on the same page as Perry whenever a body turns up dead, and delivers cute one-liners just as he forces Perry to fork over valuable evidence. Like Burger, Tragg has a temper, but keeps it in better check than Burger does. Tragg is also Burger's no. 1 boy, but often works well with Perry.

Though there are times when they seem on opposite sides of the law, and though they argue, Tragg is generally well-liked and admired by the whole team. There are even bonding moments in some conclusions. One of my favorites is the closing dialogues in "The Case of the Jaded Joker" when Tragg talks beat-daddy.

"Okay, what about these two, anyway?"

There's no doubt in the world that these two love each other. I'm not talking about the love between friends or co-workers whom long relationships have been built. No, this is old-fashioned-arrow-through-the-heart love. These two love each other. So why does nothing happen? Are we to believe that Perry has been a successful bachelor all this time? It's obvious he works around the clock, doesn't get vacations, and appears to have no substancial social life.

And what about Della? Are we to believe that someone who looks like her, is as classy a lady as Princess Di, and has irresistable charm for days hasn't been scooped up by some eligible bachelor? As an ending thought, aside from all the later TV movies, I'd like to think that these two ended up getting married.

This would be the perfect conclusion to a perfect show.