Those summer days that went on forever were the best of all.

I was free to play all day long and hang out with the neighbor kids. We spent our time eating Popsicles, running through the sprinkler, riding our bikes toward high adventure and trading comic books beneath a shade tree. In the evening, summer porches were filled with neighbors eating watermelon or ice cream, waving to one another, inviting you over. Once the sun settled, we played Hide and Seek . I remember that we used a street lamp as the place where we buried our heads in a bent forearm counting to 50 by twos. The lawns were cool to our bare feet.

Blankets would be spread out on grass and on the warmest evenings we were allowed to sleep outside. One of my favorite summertime memories would have to be of the school playgrounds , and hanging out on weekends when we were free to play, and be what we chose. And the greatest joy of the playround were The Monkey Bars. These innocent looking metal structures were indeed a fruitless attempt at the mass extermination of children. However, we fooled everyone; we survived. Not only did we survive, but we flourished, growing in numbers. We made the monkey bars our second home.

There was in fact, a certain hierarchy of supremacy directly related to monkey bars. The kid on the very top bar ruled the day. Soon, he - or she, would be joined by others seeking to be king, or to oust another person from power. Girls seemed to be more attracted to the things that moved, like the swings , or the teeter-totters . They always engaged in worthless activities like "jump rope" or "hop scotch". 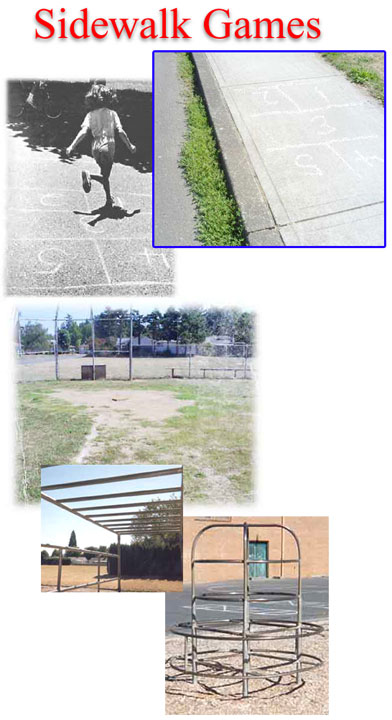 "Hop Scotch" grids could be seen about every 20-30 feet on our neighborhood sidewalks. These strange markings would appear from out of nowhere. Nobody ever saw the girls laying out these grids; they just appeared, like crop circles , sometime during the night. Though I never saw the appeal of Hop Scotch, I did have a certain respect for it. It was a game that was played outside, it involved marking up a city sidewalk, and it seemed to belong primarily to girls.

Street and sidewalk games were indeed fun. We used to be able to play in the streets, depending on the neighborhood, and how much traffic passed through. Mostly, there was little traffic. Us guys used to play street Football whenever we were instructed to stay close to home. We used to be able to actually run up to a parked car, touch it, and yell "safe" when playing tag without an alarm going off. During school, The playgrounds also belonged only to us. Sure, we were limited to how much rec time the hacks would give us, but classes be damned, us kids controlled the main yard.

After school, or on weekends, many of us kids would get together and play games on the school grounds. Games like "1-2-3 Redlight", "Red Rover" , or even Kickball, were commonplace. Soon, a new game was introduced to us: "Prison Ball" . This was the ultimate. Known to many as "Dodge Ball", we called it "Prison Ball" because once you were hit by the ball, you had to go over to the other team's prison boundary.

Now I ask you, what can be more fun than that?

Sadly, the old empty fields where we used to play rarely exist anymore. Growing up in the sixties, there were plenty of them to play in. Some were small, some large, but all were untended and otherwise left for dead. The property always belonged to somebody, but nobody ever knew who. Those old fields provided me with plenty of natural adventures.

I used to play army in fields where there were lots of trees and bushes. Mysterious trails always led to new adventures, and a new field was definitely something to explore. A field was many things; it was a shortcut home; a place to play; a place to plan and think and be with your friends; it was a place of adventure; a bit of nature in an asphalt world.

Selling Van Duyn Chocolate Bars door-to-door was all a part of being on the team. And yes, you guessed it; My mom was my biggest and only customer. In 1964 , my Mom was still separated from my dad, and thought that I should have some sort of positive male influence. So, she signed me up for little league, even though I didn't want to do it. We used to practice in Lent's Park . Helping me learn how to pitch, my mom broke several bones in her hand from catching my speed balls. She just kept going, even with a broken hand!

Baseball is all about physics and momentum.

My coaches made me run the bases twice while using a stop watch. They couldn't believe how fast I could run. I always enjoyed running, and I was indeed fast. I was also a tremendous power hitter, which likewise stumped the coaches .

I had only played softball before, and hadn't experienced a ball being pitched to me at light speed. At first it scared me. Then, I learned that the faster the ball came (physics), the farther I could hit it (momentum) if I swung at just the precise milisecond (whatever).

Naturally, they decided to go 3-for-3, and put me into right field . It was there that my weakness showed through, for I couldn't even catch a cold if I wanted. My good old glory days consisted of twice hitting the ball completely out of Lent's park and onto 92nd avenue . Both times we were playing the west field, which was about half a block from 92nd. That's how far I hit that sucker!

Something weird in the sky, Summer, 1966

In the summer of 1966 , my friend Alden and I witnessed a real UFO. We just looked up in the sky thinking it was a plane. The strange part was that it was going way too fast to be any kind of plane. The object cleared our line of sight within about thirty seconds making no sound. This was odd enough for us to keep watching it. It then began changing colors. We knew then that it was probably a "flying saucer" .

Naturally, we ran to our parents, breathless. And naturally, they didn't believe us. Instead, they passed it off as wishful thinking. It wasn't until that evening on the news that UFO sightings had happened in Portland at the same time of day, going the same direction and with the same description as the one we'd seen.

One credible witness: A state trooper who'd described it as a "bright, flashy craft, changing colors, and moving at a high rate of speed. Not quite an X file, but an exciting memory just the same.

For me, the invention of the Stingray bike was a major techno-sociological event. At last, Schwinn Bicycles had a special bike just for kids that looked something like a motorcycle. It was short, and had a long "banana" seat (that's what they were called), and motorcycle-style handle bars. It didn't take long before we started altering them just like we did with our skateboards . Your machine had to have your own signature style, and whether we admitted it or not, each style came with a degree of coolness.