Drive-Ins were the best.

When I was young, a great magical feeling arose from laying my arms on that cold metal counter, dropping down a quarter, and listening to the sizzling hamburgers inside. The scent of grease was wonderful. Vanilla from the ice cream machines daubed the air with a fine note of sweetness. These scents and more arose as a symphony of sniffs promising sugary delights and culinary masterpieces in a concerto for ketchup and cone.

I think it was around 1965 when the first Arctic Circle Drive-In came to our neighborhood. AC burgers were far superior to anything else around, and our family soon became addicted. Every Friday night in our house was "hamburgers for dinner" night. Sitting in the living room in front of the TV with a lap full of burgers and fries was proof that life just didn't get any better than that.

AC burgers had their own mayonnaise-ketchup-based secret sauce and showered their burgers with lettuce and pickles. They were a bit more expensive, ringing in at a frightening total of 27 cents apiece. It wasn't too long after our discovery of Arctic Circle that they began giving away free "Gonks" with the purchase of so many hamburgers. I loved these inflatable characters with a bell inside. Sure, they were dumb, about as dumb as a toy can get, but what the hey, they were new and they were free!

There was another great hamburger joint memory from 1964 . The place was called "Dickey's Drive-In" on 82nd and Holgate. They had weekend specials, and for 19 cents you could get a hamburger, fries, and a coke . One summer evening, Dickey's went crazy and hired a Paul Revere & The Raiders-type band to play on top of their roof. They sold so many burgers that night! The parking lot was jammed with great muscle cars and cool dudes with their chicks scarfing up these great burger specials. I will forever love Dickey's Drive-In . It's gone now, but I think it may have survived up into the early 70's. 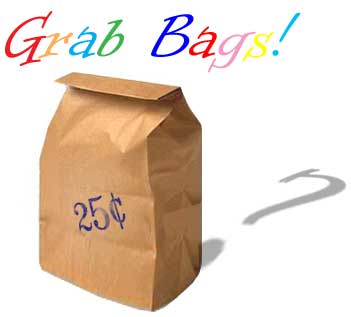 Somewhere around 1963, my brothers introduced me to a thrilling experience at the store: Grab Bags . For me, they were incredible for they held all the boyish mysteries of life inside for a quarter or dime. They had bigger Grab Bags and of course, smaller. Grab Bags were just paper bags with cheap toys and candy inside . The idea was that you never knew what you were getting. Just the brown bag with the price stamped on it was enough mystery to draw me in. I can recall that there were noise makers, little cars, cheap wrapped candy and other goodies. Eventually I tired of them, but while they lasted, Grab Bags were the hottest thing in town.

Aside from building homemade go karts on a daily or weekly basis, my friends and I would often build forts out of whatever we could find. Bent nails, flimsy plywood, pallet sections and two-by-fours made up the main frames of our secret sanctuaries. The "no girls allowed" rule was strictly enforced. Still, none of us could resist their charms as they pretended to be in awe of our structures long enough to stick their heads in for a peek. After having inspected our magnificent creations, they usually exited with an "aw, that's dumb." Inside we'd make our secret plans; We'd discuss life and the world, what was on television the night before, what was going to be on that evening, and anything else that seemed important enough to care about under the shaded canopy of plywood. Usually these forts got torn down a few days after they were built, but we derived a great amount of pleasure in building the next one, and the one after that...

You could buy these wonderful balsa wood planes at the corner store for only ten cents apiece . The planes with the rubber band and plastic propeller were more expensive ringing in at twenty-five cents apiece. These were excellent toys that provided a lot of fun considering that they cost so little. They also flew very nicely, obviously a case of pure engineering brilliance. 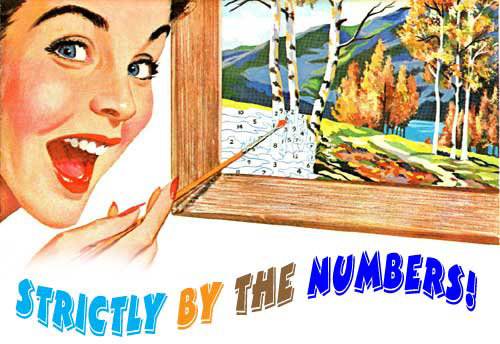 There were many times that I can recall my Mom doing paint-by-numbers. It was more fun to just watch her do it, and take in the wonderful aroma of those little freshly-opened oil paint tubs.

Us boys were never allowed to touch Mom's paint-by-numbers, but that was not a problem since my brothers were'nt interested in art. I did have my coloring books, and I worked my masterpieces in crayon. It was fun oil paint and fill in the blanks by using the specified colors marked on the cardboard canvas.

One of my favorite memories is of the summer of 1965 when I first discovered these wonderful "Funny Faces" soft drink treats. In my adult years, I argued that these were Kool-Aid products, only to be proven wrong with the advent of the internet! Pillsbury, but of course! My favorites were "Rootin'-Tootin' Raspberry" and "Goofy Grape" . I can recall slurping these summer greats while listening to The Byrds' "Mr. Tambourine Man", riding my Stingray, and playing with G.I. Joe. An Ensemble Cast Past and Present: Choo-Choo Cherry (who replaced "Chinese Cherry"), Goofy Grape, Freckle Face Strawberry, Jolly Olly Orange (who replaced "Injun Orange"), Rootin'-Tootin' Raspberry, and Lefty Lemon, Captain Black Cherry, Chilly Cherry Cola, Loud Mouth Lime, Pistol Pink Lemonade, Rah-Rah Rootbeer, and With-It Watermelon.

It's fun for me to remember most of these wonderful treats and their accompanying commercial jingles. Just the mere mentioning of the name Dolly Madison brings back the most delightful, calorie-filled memories of all time. I always preferred their cakes to Hostess. However, Twinkies, Snowballs, and Cupcakes were a hard act to follow.

1965 was the year of new, innovative taste treats. "Quisp" was one of my favorites with "Quake" coming in second. "Bugles" were wonderful. I remember biting off the end of the cone and blowing through it as if it were a real bugle. I was of course, a C- average student which would explain much of this type of behavior.

Nestle's Quik and a glass of milk. All you needed was a spoon to stir it with! The winter of 1965 also introduced me to the wonderful world of Pop Tarts .

Long before I would ever know who Edward G. Robinson was, his cartoon clone- Biggy Rat , captivated me on the black and white screen. His faithful sidekick "Itchy Brother" was always there to lend immoral support. These were two of my favorites. In fact, all of King Leonardo's kingdom delighted me. I especially loved Odie Cologne.