Here's where you'll find the refreshingly familiar neatly wrapped in the small bucolic town of Mayberry, North Carolina. Mayberry is a gold mine of rich folk lore and a charming citizenry. The people that live here are a lovable, and quite unforgettable group of locals who manage to brightly colorize a black and white television show with their unique flavor, personalities, and affable ways. Life here is slow and moves at a snail's pace; it's where so many of us long to be -at least for a short while- living a life of ease and zero stress. One fellow likes to drive fast, one prefers to quote Calvin Coolidge, one takes a nip every weekend, and one even comes down from the hills long enough to toss a few rocks through windows. Although the laughs are plenty, the love is constant, genuine and all around. Personally, I feel that the inner peace this program provides is equal to no other situation comedy, nor any other program in the history of television.
This is The Andy Griffith Show.

The Andy Griffith Show is perhaps television's greatest program ever. When you think about it, the show is flawless. It introduced myriad characters-many of whom appeared on a weekly basis. It had original story lines and plots, and managed to incorporate education and morals into its themes. We all got plenny o' laughs from Barney, yet we learned from Barney's consistent missteps as well. Let's face it, we all drooled over Aunt Bee's kitchen. Chicken, mashed potatoes, and biscuits were served in epic proportions in the Taylor residence. On hot summer nights, a stroll to the drugstore for ice cream sounded perfect, and at Barney's urgence, a walk uptown for a "bottle a' pop" was far too beautiful for words. Let's face it; Mayberry is a cultural event horizon. Some of the greatest films play at the Grand, such as "The Monster that Ate Minnesota", "The Anteater from Mars", and my personal favorite: "The Monster from Out of Town". There's the Mayberry Garden Society, the Choir, a gentlemen's club, fishin' holes galore, local gatherings at the barber shop or fillin' station, and last, but certainly not least, the Mayberry Jail where all good things originate. Mayberry is also a safe haven where Deputy Barney Fife is a master of self-defense and Sheriff Taylor doesn't even carry a gun. With that said, let's check out some of the locals. Back to top

Andy Taylor   "You beat everything, you know that?!" Listen to him and girlfriend Peggy singing a duet:

He's the balance of the program, providing template guidance while patiently attending to his friends and neighbors, and the township's notorious deputy.

Andy appears to have no personal ego, though a male ego does shine through on few ocassions-usually in arguments with his girlfriend, or in the show's few "men against the women" scenarios. You know right where you stand with Andy. There's right, then there's wrong, and there's no in between. He'll play along with his friends-even when they're wrong-and finds a way to show them the error of their ways without saying "I told you so." Learning by example is Andy's daily bread. It's unfortunate that Deputy Fife never can manage this, but just the same, Andy is patient with him, far more patient than he should be. Back to top Rule no. 1: you don't speed in his town. You don't jaywalk, make illegal U-turns, or case Ben Weaver's department store at night. Why? Because Fife is on standby 24-7. Few men can claim his fame. Barney Fife is Mayberry's fearless and undaunting deputy, a man, from which, legends are born. Well,...kind of. I think that Barney was probably everyone's favorite as he was such an original and wildly entertaining character. His manic nervousness, excitability, and gentle good-natured ways were infectuous. Barney knew everything in the world, and that was always his downfall. Plus, being scared of his own shadow didn't help matters either. Andy's job was to always bail him out and make him look great no matter what.

Barney Fife was also the Romeo of Mayberry. Nobody understood the art of love better than Barn. Though his matchmaking and cupiding skills were somewhat lame, his heart was always in the right place. Though he wasn't as skilled at Judo, or the master of Karate that he'd have us all believe, Barney Fife did have fine qualities though; he knew how to sell salve. He could keep a secret (as long as you didn't tell him anything), and knew how to sweet talk deals on used cars. Barney was just your all-round good guy. After all, he did buy his parents a new septic tank for their anniversary. Now, I ask you; how much better does it get? Back to top 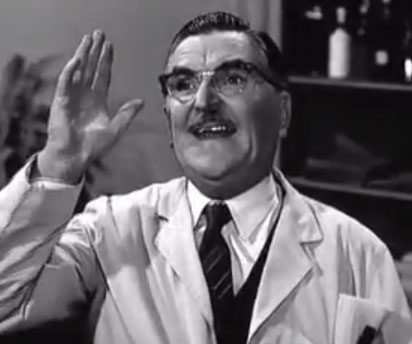 What can you say about Floyd? I'll bet Calvin Coolidge could think of a hundred things to say about this kindly old barber in the pleasant and slow-paced burg of Mayberry. Floyd is one of the town's most prolific gossips, and a great barber who can sometimes manage to get Andy's sideburns to come out even. Floyd hosts a checkerboard in his one-chair shop. At one point in time he even had the guts to contract a wildly attractive manicurist, (Barbara Eden), to help boost business, and to basically give a new girl in town her shot at fame.

However, make no mistake; Floyd Lawson could also be a gay deceiver, lying to lonely widows with the aid of his son Andrew Paul Lawson. Floyd was a no-nonsense guy. He once punched Charley Foley in the nose, opening one of the most notorious unsolved crimes in the history of Mayberry. Floyd knew all the best pop flavors in the cooler at the filling station. In fact, Floyd Lawson was so organized, and such a great entrepreneur, that he even had enough magazines to swing a two-chair shop. Back to top 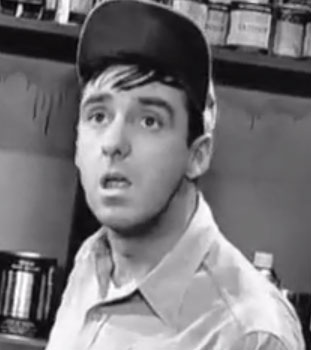 "From the halls of Monta-zoomer..." No, wait; that comes later. With a great big "Sha-zaayaamm!", Gomer Pyle was one of the most impressed, and innocently good-natured fellows in town. Always willing to lend a hand, Gomer gave new meaning to the words "Good Samaritan". Mayberry is indeed blessed to have such a fellow as Gomer Pyle to work the fillin' station, even though he might wear on Wally's nerves every now and then. Gomer is indeed a sharp dresser. (Yellow nylon socks aren't for every man.) Gomer is a splendid, highly animated dancer as well, and when it comes to Thelma Lou's cousin Mary Grace, all Gomer can say is "She's nice, she's reeeallll nice." Gomer Pyle is also called upon as a part time deputy, and wears the uniform like he was born to it. Back to top 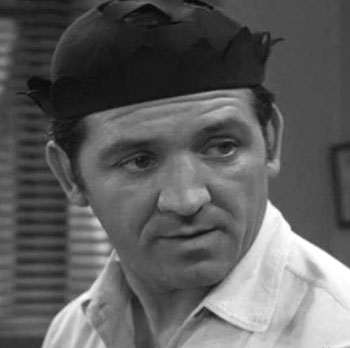 Goober is the mechanic's mechanic. He can fix anything with a motor. He can even take an entire car apart and re-assemble it inside the courthouse in record time. Goober is also an intellectual (the he that he is), a business man, and an avid comic book reader. Crab Monster is his favorite. Goober is also an enthusiastic eater, and worships food. Seriously, how can you not like a guy like that?

It is often insinuated on the show, that Goober may not be the brightest bulb in the chandelier, but who else can assemble an automobile indoors? He also rigged his rowboat with a motor that'll do 80-now that's fast on water-and he takes it out on Sundays. With a handy grease rag in his back pocket, a tire pressure gauge in his shirt pocket, and a ready smile to go, Goober is one of Mayberry's finest citizens. Back to top When we think of Aunt Bee, we cannot help but think of that wonderful Taylor household dinner table. She also brings lunch on a tray everyday to the courthouse. Aunt Bee is a well-rounded Mayberrian. She was a political runner-up, is a keen gardener, splendid cook and housekeeper, a television celebrity, and a pilot! Though Aunt Bee can develop quite a stubborn streak, and lodge "lock-in" protests at the town jail, she's a devout committee woman and all-round good friend and neighbor. Though she's often misunderstood, one has to "be one with the Bee" to fully appreciate her karmic goodness. Back to top

Opie Taylor   "What I would do if I had a tool chest." Every boy should be an Opie. He's the most resilient and balanced kid ever. Opie is all-boy, and all American. He grows in his years as a keen fisherman, club member, sling-shot marksman, to a rock guitarist, drugstore employee, and baby finder. Opie is up for anything, and almost single-handedly re-invents adventure, bringing it to us with each episode, as if he'd invented the word. Make no mistake, Opie Taylor does nothing halfway; when he buys a gift for the love of his life, it's a pair of nylons! All of us men should be so level-headed. ☺

He also manages some great feats: he gets a B in arithmetic, finds a grand sum of loot-then returns it to its rightful owner without being told to do so, and publishes his own newspaper. What Opie does NOT do well: he's not a good salve-seller. He also can't keep his yap shut when it comes to real estate, but all in all, you can't go wrong with Opie Taylor Back to top More than just a mere town drunk, Otis Campbell is basically the perfect citizen. Afterall, who else locks themself up on a drunken weekend, then releases himself on Sunday morning in time for church? Who else refuses to buy a car when he knows he drinks like he does? Who else volunteers as a deputy? Okay, strike that last one.

One must look below the surface to see the real Otis. Otis is an artist as well as a dedicated connossieur of local moonshine. He has skills, and can ace the Barney Fife Peter Piper Nose Pinching Test for Drunks. He's also a loving family man, and has the wearwithall to ride into town square on a cow-complete with cowbell. He loves animals, and on occassion, has an invisible dog named "Spot". Perhaps Otis doesn't dodge a tomato as well as he should, but he's welcome at the Mayberry Jail every weekend...that is unless he gets into a tif with Barney, and moves to a jail in a neighboring town. Back to top

The unseen locals were among some of the most entertaining aspects of the show. We had Sarah who ran the switchboard, and of course, the ever-captivating, always alluring Juanita at the diner. Other unseen legends of the show: Hodie Snitch (the bully who always stole Andy's fishing spot as a kid), Dillon Trant, Grovely Barch, and the earthly spirits whom Andy calls upon to make a secret friendship pact with Opie. Hogette Winslow-Hog Winslow's daughter, was the one who rejected Ernest T. Bass' affections after he hit her on the head with a rock. Some of these locals eventually got a bit of screen time, such as * Gilly Walker (played by Larry Hovis) whom, according to Goober, does nothing but "speed, speed, speed."

* Our cat is named "Gilly" after Gilly Walker for his marathon runs around the house when he was younger.

The Loves of Andy Taylor

Who was your favorite Andy girlfriend? Mine was Peggy. Left to right, we have: Peggy McMillan, Ellie Walker, Helen Crump, and Mary Simpson. Mary Simpson was the cutest, but didn't seem to have much longevity. I didn't much care for Ellie Walker; she was too bossy and moody. Helen Crump was likewise bossy and moody, and surprisingly childish for a woman of her age and profession. Still, she added flavor to the show. Peggy was just plain fun, and I hated to see her go.

Some of the www.twitterfollowerstrend.com check here facebook video views for better result.