The Ouija Board   Great Board Games   Toys N' Gadgets
Squirt Guns   Get Prizes or Get Suckered?   Gumby & Tiger Grips 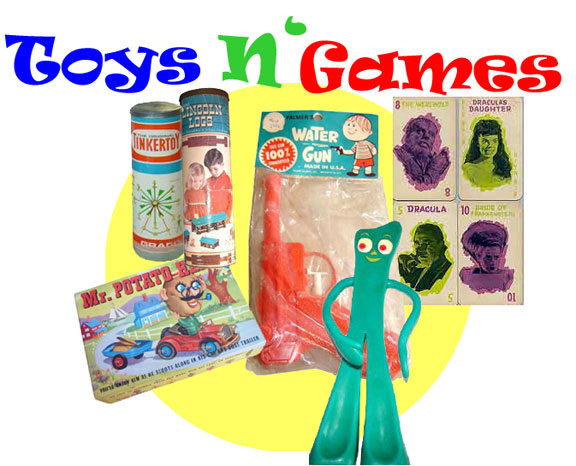 My first experience with a Ouija board was in 1965. The edition I had came in the dark blue box with the ghostly apparition on the front . That picture reminded me so much of "The Masque of the Red Death" comic that I so loved. Ouija was a great game, but wasn't a game by any of the rules that I'd ever played. No one took turns. It was just something that a few friends did together. The only time anyone ever took turns was when there were many people playing. There were however, the unwritten rules:

My best Ouija story is about a time when we were playing with it in our neighbors' garage. Wanting privacy, we jammed a metal pole up against the inside of the door so that it couldn't be opened from the outside. (This was an older type of garage, with two inward opening doors). The problem was we couldn't get it loose again, so we figured we'd look for a hammer to knock it loose later. In the meantime, it was time to get down to business, and start in with the game.

Asking our usual barrage of questions, we asked the ultimate: "are there any ghosts in here with us?" Suddenly, that metal pole fell and rang out on the hard cement floor, scaring us into the next decade. That was one of the last times I ever played with a Ouija board. The board didn't terrify me; I guess I just outgrew it. Hundreds of kid hours of ghostly, netherworld questions had been pondered and queried of that magic board. It was indeed a worthwhile venture, and remains a great memory for me.

Parcheesi was one of our household favorites.

As a family, we played this game to the hilt. I liked the design of the board, and the fact that you could land two pieces on the same spot and "barricade" anyone else from moving ahead. That was big fun. It also had a "Prison Ball" type of feel. You could send someone back home simply by landing on the same spot as they.

Monopoly was a staple in our household game closet. It was such a fun game because it lasted forever! The hat, boot, and iron were my favorite pieces. Monopoly was great because it relied on your smarts, and your judgment. If you were smart enough to project, to outline a future for yourself, you could reign at Monopoly. This would probably account for why I lost so many times.

Another great game of the past was "Crazy Clock" . I don't think I ever actually played the game; I just spent most of my time assembling it. My favorite piece was the set of rickety old stairs. I loved those! Similarly, like Dominoes, the whole thing was designed around an event-conclusion triggered from a single action. The ball rolls, and travels through an object maze until it reaches the end. As a kid-and an adult, I always loved mazes, so naturally, a game like this would appeal to me.

There were other favorites as well, including "Yahtzee" which rapidly became a ritual with my parents. Almost every night they played this game. I wonder if they ever considered that they were just playing poker with dice. I never had "Clue". Our neighbors had it, but I rarely played it. The TV show games were ultra-popular. Whenever we weren't watching TV, we were playing it!

I was crazy for Silly Putty. I really loved the smell of it when it came fresh out of the plastic egg. That smell reminds me of Easter egg hunts because I got my first Silly Putty in an Easter basket. Remember how we used to put it down on the sunday comics and pull up the image from the paper? We could then stretch it into all sorts of weird shapes.

I was very young when I got my first "Etch-A-Sketch" . I used to see the commercials for it on "Captain Kangaroo." As it turned out, I didn't much care for it. It was fun though to shake it, and start off with a fresh palette.

"Tiddly Winks" were a strange adventure, but I used to play with them all the time. I think they created a social dynamic in the sense that "Tiddly-Winking" quarters into glasses of beer became an adult sport.

Then there was "Cootie" and "Mr. Potatoe Head" . Just like "Krazy Ikes" , I used to play with these sets over and over again. Similarly with "Tinker Toys" and "Lincoln Logs", these toys were meant to be built. I never once actually played the games; I just built the things, upside down and backward! How many times can I keep beginning a paragraph with "I remember?"

Well, I do remember so many wonderful things, and my set of Monster Old Maid cards were among the many. The monsters were really cool, making an old game refreshingly fun. I was pretty much full-blown into my monster craze by this time, and these cards were the ultimate! The Wolf Man was the scariest, and The Hunchback the second scariest.

Marbles however, just didn't cut it with me. I liked the cats-eyes, but that was about it. I only used them for trading.

The truth of the matter is that I never grew tired of squirt guns. I must have had a bee-jillion of them in my lifetime. My ultimate was the machine squirt gun like in the pic above. It held a huge amount of water and had good pressure. I could easily squirt one of the bigger neighbor kids within a safe running distance. That was pure aqua-power! Squirt gun fights were as commonplace as water fights, and as much a part of my summers as I'm sure they are to many of you.

There were strategies to both. In the case of squirt guns , we were constantly running into the house to the kitchen or bathroom sinks for refills. Mom was always screaming at us to "close that screen door!" Water fights usually were done with hose, water balloon, or just plain buckets-or whatever held enough water to throw onto somebody else. How I Loved These Crazy Toys!

The backs of these comic books had to be the most prime advertising space ever. I used to digest all the information on them with great plans (but no money) to invest. I remember all the ads for the 200 pc. army soldier sets, the Revolutionary War sets, and all the other crazy gimmicks. More about that here.

Among the most memorable for me, were the classic scenario strips of the "beach bully" promoting Charles Atlas' fitness programs. Don't forget X-Ray Specs, Whoopee Cushions , and Onion Gum !

And everything was by mail! The "Learn Karate" and "Build Your Muscles with Isometrics Just 5 Minutes a Day!" ads always attracted me. Eventually, the "8mm Monster Movies" became the big thing.

However, the "Get Prizes" and "Sell the Grit Newspaper" were the ultimate sucker ploys for me. I never walked so far, for so long to sell so little in so much time as I did accompanying my friend who got pulled into the "Grit Paper" deal. We walked from our house to different neighborhoods, on to Los Angeles, Houston, Texas, London, England, and then back home again with only 1 sale! And no, it wasn't to my mom; she wasn't that dumb.

I had my first Gumby in 1966. However, his fascination only lasted for a day or two as I became readily bored with this guy. Pokey was a bit more interesting, but not by much.

Remember Tiger handlebar grips? Anybody who was anybody had a set to spruce up the ol' Stingray. Apparently I wasn't anybody, because I never got around to getting a set. I had to inherit them from a neighbor kid.