Listen to western TV theme songs while you read!
Warning: this page is part of the Lazy J Ranch,
and we don't cotton t' sissies, dudes, cardsharps
or bushwhackers. "Reach mister, I ain't gonna tell ya again," Ah, the great westerns of 60's television. In prime time, nobody could resist them-largely because there weren't that many choices on television-but there was another reason: they appealed to almost everyone. Welcome to the Lazy J Ranch where the TV westerns of the 60's had nobility which other types of shows seemed to lack. There were handsome leading men for the ladies and lots of roundups and gunplay for the gents. Westerns provided all round entertainment, with guessable plots, last-minute problem resolutions, and fast-paced action. Towards the mid to later 60's, westerns began taking on tougher issues-social issues-with a few grown up themes.

The cowboy was the heart and soul of our nation; the epitome of the last man standing with honor, courage, and rugged good looks to spare. Cowboy shows were so popular that they flourished like flies at a picnic. To compare the amount of westerns produced for television as opposed to war dramas, or love stories, would make a very lengthy list. So, with that said, slap on some fancy smellum, get ready for a Saturday night in town, and let's move the herd toward those wonderful TV westerns! 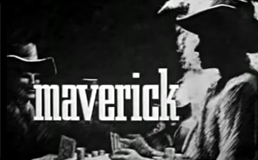 "You sayin' I'm cheatin'?" James Garner was his name, and he was Bret Maverick. Cardsharp extraordinaire, with that wry James Garner sense of humor, Maverick was one of the reasons we had a television set. I remember the show in syndication only, but it was watched in our house with regularity. Later in the first season, actor Jack Kelly played Bart Maverick, Bret's brother. I have always been a huge fan of Clint Walker and "Cheyenne" was one of my favorites. Walker, like James Arness, was quite a mountain of a man giving him that extra umph to his tough guy persona. But like Cheyenne, Clint was good-guy humble, and a very likeable character in western work. One of my Clint Walker favorites: "Night of the Grizzly".

More of my favorites were Wanted: Dead or Alive", "The Rebel" and "Branded" with Chuck Connors. "Death Valley Days" was one show that used to come on in syndication every night at 7:00 pm. The best part was that it was in color. 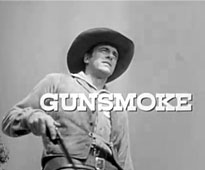 "Gunsmoke" was one of the most watched shows in our household. My dad was a devout western lover, so on our block, we probably watched the most of them. Marshall Matt Dillon was a great character; 12 feet tall, 500 pounds, and a wicked fast draw made him a formidable lawman.

Okay..., the height and weight are a bit off, but in reality, actor James Arness was 6' 7" which allowed him to fill the screen. Great characters such as Doc, Miss Kitty, and the loveably haggard Festus, were unforgettable.

I watched gunsmoke through the "Chester" years, and admired the characters played by Buck Taylor, Burt Reynolds and Dennis Weaver, but there was no character as wonderful as Festus Hagen. The grizzled old side-talkin' deputy was a show stealer, and offered a ton of comic relief, but was still considered someone to take seriously once he drew his pistol. Gunsmoke also had the tension of an unresolved romance between Marshall Dillon and Miss Kitty. They were in love, but never got aroun' t' doin anythin bout it. 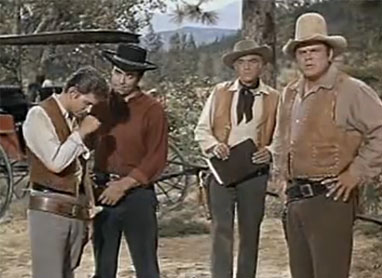 "Bonanza" was another favorite show in our house. Every Sunday night at 9:00 pm, the NBC network gave us fine entertainment from The Cartwright family. Widower father Ben and his three sons-all as different as night and day-share the work and responibilities of The Ponderosa spread. It has been reported that this program was one of the pioneers of color television programming simply to promote the idea of buying color television sets. The Cartwrights did enjoy the honor of being television's foremost western family, and the program managed fourteen seasons accompanied by very high ratings. If I were to take a guess, I'd say that Hoss was probably my favorite character on the show. When actor David Canary came on the show as "Candy", he became my second favorite. Oh yes, and that theme song is unforgettable!

"You'd better head back to town, and spur all the way."
Once we acquired our first color television set in 1966, TV westerns took on a whole new persona. My dad loved westerns, so did my mom and the entire family, but for me, during the 60's, there was no show as great as "The Virginian". This was what westerns were all about! The program was a real breakthrough for television as it filled a 90 minute time slot. This permitted unusal plot twists that weren't as easily guessed as the standard western. With The Virginian, there were some interesting story lines, with an emphasis on characters (one episode even featured a cowhand with schizophrenia that murdered by night!) The extra minutes permitted the writers to flesh out a better story each week.

The characters were: The Virginian of course; top hand Trampas (I'm not sure if he ever has another name mentioned or not); top hand Steve Hill; the landowner and rancher Judge Henry Garth, his daughter Betsy, and last, but not least, the beautiful Wyoming territory itself (though not filmed on location.)

Premiering in 1962, The Virginian ran for nine consecutive seasons, not as long as Gunsmoke or Bonanza, but long enough to secure strong ratings and a stronger following. "The ramrod" of the Shiloh ranch was a loner known to everyone as simply "The Virginian". (His true name was never revealed during the entire nine seasons of the show's run). Actor James Drury brought this character to life in a way that I'd never seen a western tough guy ever portrayed. He gave no quarter, and never missed an opportunity to push when it was necessary. He threw whiskey bottles at bad guys to get their attention; he yelled at judges in the courtroom and braced bullies in the streets or saloons with the ferocity of a half-starved Rotweiller . The Virginian was the toughest, strongest, most fair, and most noble TV cowboy I can remember ever. To this day I collect the DVD sets! (They're very expensive, but I'm about halfway there).

If you tried pushing The Virginian, or tried out-stubborning Steve Hill, or tried playing poker with Trampas, or defied Judge Garth, or did not fall in love with Betsy, then you were just plain foolish. The 90 minute time slot permitted this program to serve as basically a western movie every week. In its ninth and final season, "The Virginian" switched its title to "Men from Shiloh" and lost its magnificent theme song "Lonesome Tree" by Percy Faith. The new theme song was by the now-renowned Ennio Morricone, but was wrong, and very awkward for the show. Characters came and went, but thank goodness we never lost Trampas or our title character. Chuck Connors, referred to as "Old Iron Jaw", brought an unforgettable face to westerns. For me, Chuck was the western; he was tough, deliberate, unyielding, and usually a good guy. I loved every episode I could digest of "The Rifleman". The shows title character was Lucas McCain and he was a widower raisin' up his young son Mark. Most notable is the fact that it was the first western to feature a widowed father raising a son. "Bonanza" topped this theme one year later with a widower raising three sons! Lucas McCain carried the Winchester '73, his rifle of choice, and solved many of the show's problems with it.

Chuck Connors was a pro baseball and basketball player before "The Rifleman" He played with the Brooklyn Dodgers and The Chicago Cubs, and was one of the original members of The Boston Celtics. Chuck portrayed Jason McCord in the popular TV western "Branded" about an army officer unjustly drummed out of the army as he was falsely accused of desertion in battle. This show was another favorite, and Chuck Conners earned himself a place on the bench with my ultimate TV western heroes: "Cheyenne", "Wanted: Dead or Alive", "The Virginian", and Nick Barkley from "The Big Valley".

A tip of the hat, generally with only two fingers touching the brim, opened every greeting to a female on TV westerns. The ladies were as bountiful as the gents on these shows, and often provided the flip side to the attraction of the program for male viewers. One of the most interesting female characters for me was the introduction of a rancher's Mexican wife. Actress Linda Cristal lit up the screen as the charmingly sustained Victoria Cannon on "The High Chapparal". The High Chapparal was also a great show, with wonderful characters. Victoria, the daughter of Don Sebastian Montoya, a fellow big-time cattleman, brought her brother Manolito with her to the ranch. The ranch was run by John Cannon and his brother Buck, who, was barely one step ahead of the law, in his ways of getting things done. Buck was played by the great Cameron Mitchell who brought a new kind of badness to the big screen.

The Big Valley was a show that I did not miss-ever. And no, it wasn't because of Linda Evans, it was because of the hot-tempered tough guy Nick Barkley played by actor Peter Breck. I always loved the way he got things done. Considering how much I liked this show, it's interesting that I really didn't like most of the characters! I could've easily done without Victoria, Jarrod, and Audra. I really watched the show only for Nick and Heath. Heath being the underdog gave him some decent story action, and it was the stories that were really well-told and held my attention.

"Sure, you can kill me, but not before I put a bullet into you." What I really hated among westerns were the tiresome stories. These were the ones that either took place somewhere back east with fancy dudes and almost zero action, or the endlessly tiresome "cave-in" stories. Each western had to have a cave-in where the main characters were trapped inside a mine, a canyon pass, or a cave. Of course it took the entire show for the others to figure out where they were; Of course there were only few precious moments of air; Of course they were barely alive when discovered.

Well now, I guess we better git t' some westernisms!