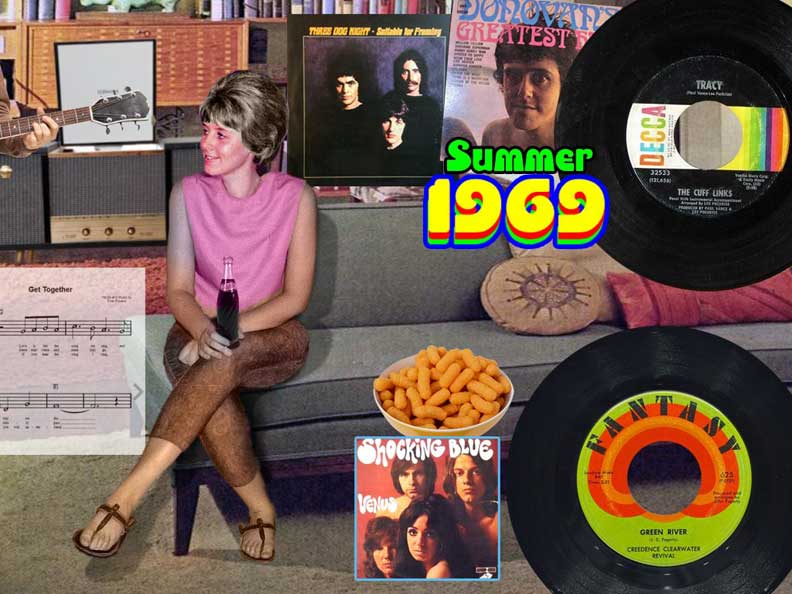 1969 was an incredible year for music. Sadly, it was also the end of a great era, but the music still lives on as strong as it was then. Still, why did parents always yell at us to turn it down? Well, we all know the answer to that one. I personally feel that the music of 1969 was, and still is as among the best music of the entire decade. That summer we had a neighbor with three daughters-two of whom were just plain boy crazy-and one just a bit younger. I'd go over to their house quite often and we listened to records in their basement party room. One of their favorites was "Spinning Wheel", "Crimson and Clover", and anything by Donovan. I was still reeling over "Green River", "Get Back", and "Honky Tonk Women".

The basement was a cool family cave, safe from the heat outside and well lit with swag lamps and brightly colored with classic decor. This family was much better off than we were, but both parents had to work like crazy to maintain that lifestyle; the dad worked overtime all week. (It was also the first time I'd ever seen the family Cockapoo get her teeth brushed). I still think about this party basement, and the taste of icy cold Cokes and cheese puffs while we played music, or watched music shows on TV. This was also my last hurrah summer before entering high school as a Freshman, and some of the music on the radio brings back tremendous memories.

"Get Together" was a song I sat glued to the radio waiting for, and Three Dog Night became a band that was promised to go places. "Crystal Blue Persuasion" takes me back to a time of sitting with my feet up on a vinyl ottoman sipping Pepsi, while Harry Nilsson's 1969 re-release of "Everybody's Talkin'" places me at the cool sunsets of a completely fulfilled life.