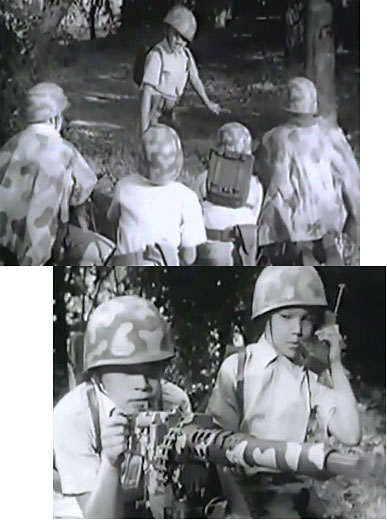 I really love to remember those great days of playing army outdoors, all year long. Rain, cold and snow didn't stop us from having the best fun of our lives. I often wonder what it is about those days, the memories of all that plastic play gear, and the feelings of such joy, that still invade my thoughts. Trekking around the cold fields, parks, playgrounds, or wherever else we could find, was so much fun, and brings back vivid images. The day after Christmas when everyone recieved all their toys was a great day for playing army outside. Somebody usually had something new and different that added a perfect element to the mix. 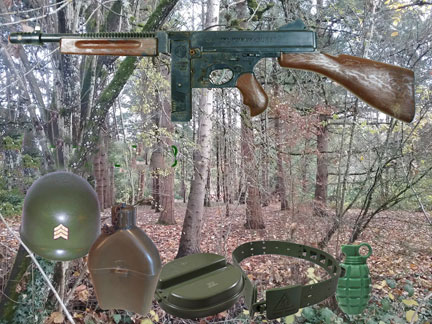 Those play days of army and army toys are very precious in my memories, and as I get older they seem to be even more clear. I don't think it's only about remembering a special time when playing and games were our only concern; I don't even think it's about the freedom of childhood sans responsibilties; I think it's about remembering a time when the world in general seemed like a much better place than it is now. The smell of the plastic of the old canteens and play accessories is to me now quite vivid, and brings up names like Remco, Marx, Kenner, and Mattel.

When it rained, or was too cold outside, 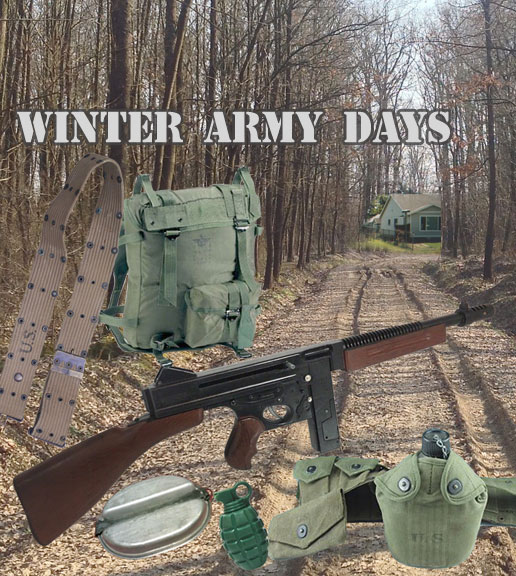 Half the fun of playing army in the winter time was that the fields and local play areas were mostly deserted by those kids who preferred the comforts of playing indoors. We'd often go off on long (longer than usual) expeditions seeking out uncharted fields and secret places. There were a few successful ventures, but it was the doing, the seeking that was fun. What was even more fun was when we could assemble a large group of guys to play. In southeast Portland, there were lots of great alleys, dead end streets, dirt roads, and wide open lots or fields where we engaged our battles. With our fingers frozen, and our noses running, my friends and I sought the greatest of frigid outdoor adventures while on constant patrol for the enemy. There were also the times when we just stayed in the neighborhood.

A parked car could have been an enemy tank in our imaginations, and that vehicle would be the focus for imaginary hand grenade throws and bazooka blasts. Being staked out behind a street corner fence was great until some car would pass by, and the driver would wave at you giving away your position to the enemy. On sunny winter days, frost covered the puddles in a crytal blanket awaiting out rubber-booted feet to stomp them and hear the dry cracking sound before our feet were submerged in the freezing water. 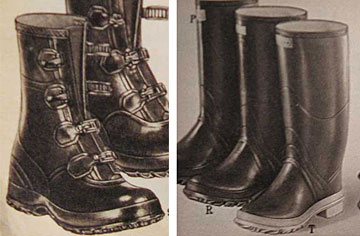 And speaking of stomping around frozen mud puddles, I was also very big on action clothes; Anything that looked rugged, or faintly resembled military or action garb, I wanted it! There was a certain pair of rubber boots that were taller, and I always wanted them because they looked like German army boots. I constantly scanned the Ward's Catalog for them. They couldn't be the ones with the lighter colored soles, they had to be "dark all-over" like the center boot in the catalog picture on the right. A neighbor kid had a pair of these, and he used to tuck his pant legs into them and they were the coolest looking boots ever. I never did get a pair as my parents preferred the old standard buckle-clasp, so I made due with them. They were still boots, and boots were always cool.

Canteens were at the ready, filled with chocolate milk. Cartridge belts were fully equipped with Good N' Plentys, Tootsie Rolls, Red Hots, Licorice, and anything else worth buying in the penny candy shelves at the B & F Market. It was a freezing day in January. After acquiring a multitude of actual army surplus gear, I bundled up for what I had planned to be an epic game of Army. 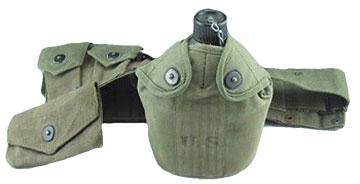 My brother Pat, a bunch of kids from the block, and myself, went out to play army. We clanked and rattled with our toy guns and actual military gear. Aside from the candy-stuffed cartridge belt, 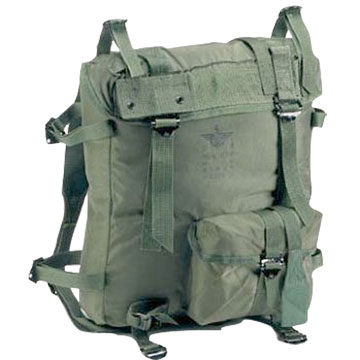 I had an official Army back pack, mess kit, and shovel. As an eight year old kid, high adventure was always welcome, and find it, we did. Long patrols were serious business which was why we needed so much candy; discussing a plan of attack sounded so much more authentic when mumbled through a mouthful of Tootsie Roll.

First, as any tight military unit would be, we prepared for the elements. Sweatshirts and jackets were donned, as were rubber boots for the land mines of puddles. In certain fields near our houses, patches of puddles and wet grass were abundant, so boots were not only really cool to wear, but mandatory. As we trekked our way down 62nd avenue, some of the other kids got cold and decided to go back home to play inside. The rest of us die hards marched forward, ignoring the cold, the pain, and the perpetual anguish of battle.

We hiked it, one and one-quarter mile beyond our lines. We crossed Flavel Street which was a busy two-lane thoroughfare, and ventured into enemy lines. Taking a short cut, we took refuge in the backyard of our friend David's house. It just so happened that his mom and mine were the best of friends, and my mom was over visiting. While they talked for hours about girl stuff, we set up an outpost in the back yard. 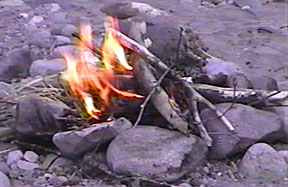 David and my brother Pat got the brainy idea of collecting wood to make a campfire. After finding suitable burning material, they proceeded to use old newspaper for kindling until a suitable blaze engulfed chunks of tree branches and found two-by-fours. The smell of wood smoke on a frigid winter morning was very delightful. 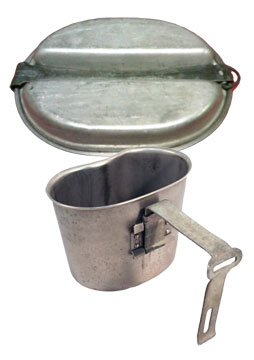 As the dry wood crackled and popped, we used my army surplus mess kit, and proceeded to make oatmeal over the fire. As a mission in general, it was quite successful. When the oatmeal was ready, Pat and David couldn't resist running into the house with the mess kit and declaring "Got any sugar?"

All said and done, the backyard campfire did not meet with favor, and we soldiers were reprimanded and put on report. Still, this one is one of my most cherished memories, and those wonderful, carefree days of playing army were among the best times in my life.