1969: The End of an Era
From Stock Cars to Steppenwolf
Art Supplies
The Drug Culture
What Was, and What always Should Have Been
Peggy & Denise
1969 Styles

1969 was a year of explosive and robust change; paisley and beads were in; people had hair and they were growing it. Buckskin fringe, psychedelic posters, and some of the best music to ever grace the air waves colored my world. More importantly, 1969 was the end of the great '60s decade.

The closer 1969 got to the end, the greater the impact it had on me. October marked the debut of The Beatles' "Abbey Road" one of the most highly-anticipated albums in my small collection. I remember fondly those days bathed in black light with amazing music playing through the tinny speaker of my record player. I'd just begun my freshman year of high school and was struggling to find myself.

There was a universal theme that rippled through a new trend of hippiedom: Love, Peace, drugs, and Rock and Roll. Although the year showed us its dark side in its last few months of life, positive events also happened. 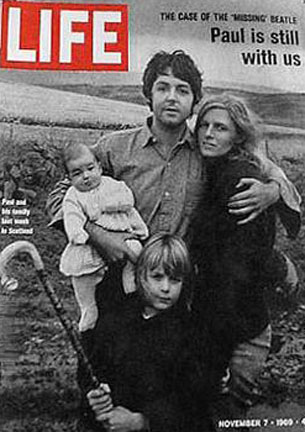 Astronauts landed on the moon in July of 1969. Woodstock happened in August, and oddly enough, an X-rated movie won the Academy Award for best picture! That movie was "Midnight Cowboy". In November of that year, Life Magazine issued a cover story article about an abstract series of rumors, coincidences, and mis-identified events that challenged the world to believe that Paul McCartney was in fact, dead. I could never buy into that theory, but I have to admit it was fun and creepy to play pieces of "The White Album" backwards.

The music was also changing. Rock N' Roll took some delightfully surreal turns. It traversed through strawberry fields, sailed across diamond skies, and danced upon psychedelic bridges over not-so-troubled waters. The sweeter, carefree melodies of the earlier sixties became enhanced by distortion and "fuzz-wah" pedals. Rock Guitar had a whole new job description, and newer, more experimental music solidified the birth of what became known in the '70s as "hard rock." Culturally, I was aesthetically drawn to the new age of psychedelia, music, art and the explosion of free speech. During this period music was the catalyst that drove me toward all the teenage ambition I had, and at the helm were The Beatles.

In 1969 I was a gangly 14 year-old thinking I was much wiser than even the adults around me simply because they knew nothing of my world. In short, it seemed that my worldview of life was the only one that mattered making me a 14 year-old sage, yet I hadn't even taken the time to notice that the decade was ending. 1970 was very close, and all that I could predict about the '70s decade was that I would be older and more in control of my life. Oh, how wrong I was. 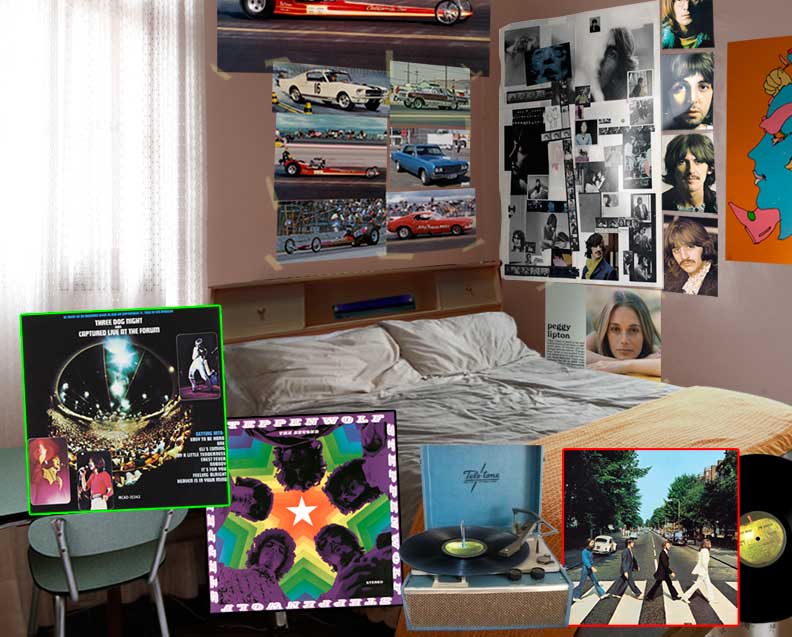 I had a keen interest in funny cars, stock cars, motorcycles and jeeps. I loved top fuel dragsters of any type and was building many car and dragster models. Aside from Beatle pictures, I had several magazine clippings of racing cars on my wall. I loved building models car models, but I also took a very keen and nostalgic interest in re-building Aurora Monster Models.

We lived in an area called Rockwood very close to the city of Gresham. Gresham was just beginning to take shape and had just about one city block of functioning businesses. The rest of Gresham was overgrowth and open fields. By this time I was also listening to my Steppenwolf albums like crazy. My Mom flipped out when she finally understood what John Kay was singing in "The Pusher", and she decided to investigate all of the music I was listening to.

1969 marked the year that my Mom began to fear not only the suggestive lyrics in the music I was listening to, but the drug culture in the world around us. That very culture seeped into our household via psychedelic album covers. 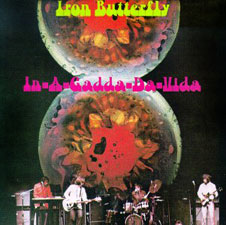 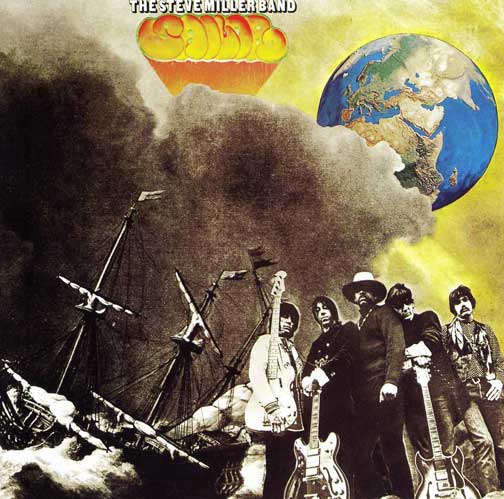 She began scrutinizing all of my records raising suspicious eyebrows over anything that didn't look right. Iron Butterfly's "In-A-Gadda-Da-Vida" was not met favorably, and it took a great deal of convincing for her to accept that records. She also didn't like anything by Jimi Hendrix because of the wild psychedelic clothes he wore; she thought his records looked too "druggy", and refused to let me listen to him. I began putting my Hendrix albums into Blue Cheer and Iron Butterfly covers. Poor mom never knew the difference. She eventually gave up the fight.

1969 found me head-over-heels in love with the Fender Stratocaster guitar. My first play on an electric guitar was on a cheap Fender knock-off brand called Victoria. My Dad bought it at Fred Meyer's for $29.97. I struggled not only to learn guitar, but get inside George Harrison's mind, and master the F and G chords. The sounds of guitars for me represented power and beauty, and I was far more bewitched by these instruments of wonder than I was with cars.

In 1969 I was blooming as an artist, and invested in art supplies whenever possible. I did my first extra large portraits. I was fascinated by the neon colors of Omega small plastic erasers, and collected about 6, or 8 of them. They only cost a dime apiece, so why not? 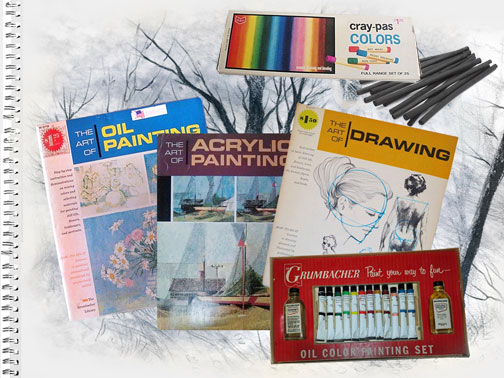 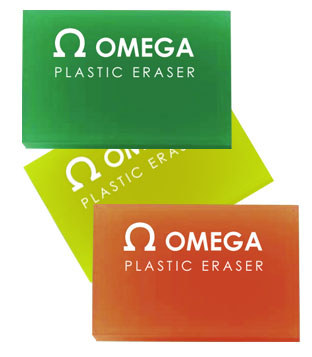 I spent much of my time drawing portraits of The Beatles and Steppenwolf on giant 18 x 24 sketch pads. Most of the time I was drawing on newsprint because it was cheaper and I could get more for my money. I drew many, many portraits on that stuff. On one particular ocassion when a friend was staying overnight, we stayed up all night drawing a shared collage of The Beatles. It was quite a peice of work when finished! 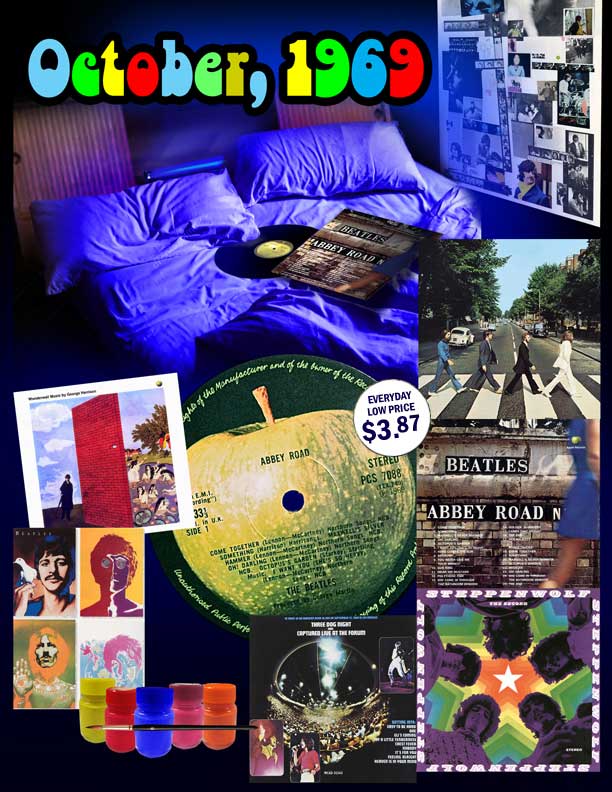 Led Zeppelin had just released their epic "Led Zeppelin II" in October of that year. I remember sitting in my room in the ambiance of black light listening to "What is, and What Should Never Be" thinking that it was one of the trippiest songs I'd ever heard. 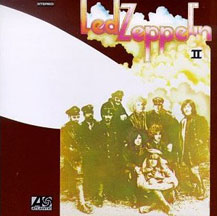 The album version of "Whole Lotta Love" had the same effect on me. Led Zeppelin II re-defined my understanding of hard rock. Jimmy Page's guitar work in "Heartbreaker" was monumental to me, and the whole album was a dictionary definition of musical perfection. The song "Thank You" was a beautifully emotive acoustic/electric anthem that closed out side one.

Newer and newer bands were on the scene, and I was treated to such classics as "I'm Tired" by Savoy Brown and anything by Creedence Clearwater Revival. A song called "Heartbreaker" by a band I'd never heard of before, Grand Funk Railroad was one of the best songs I'd ever heard. (It's still my favorite of theirs). I stayed glued late nights to my FM station, patiently waiting for that song to play. I eventually won a radio giveaway gift certificate for being the first caller to identify that song.

The Beatles were still tops on my list, and I never stopped listening to their albums. For me there was no time period that mattered; I played "Meet the Beatles" and "The White Album" with equal enthusiasm. When "Abbey Road" came out on October 1st, I was at the record store buy one of the first copies! For me, the world momentarily stopped turning. It's my opinion (as it was then) that George was the top songwriter on that LP. I felt that "Abbey Road" was the apex of their career, and their music had never been so good. 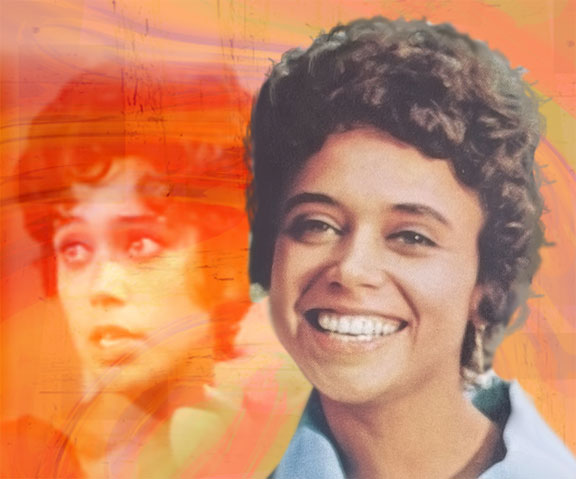 I was girl-crazy without a doubt, and there were several girls both celebrity and local that really turned my head. Though I'd had a mad crush on Peggy Lipton ever since the debut of "The Mod Squad", newcomer to the scene Denise Nicholas stole my fourteen year-old heart. I felt very fortunate that both shows appeared on different nights so there'd be no serious competition between the two. Interestingly, Karen Valentine wasn't the one that I was crazy about; she was cute and adorable, but the exotic look of Denise Nicholas was what sent me through the rafters. She'd become a serious runner-up to Peggy Lipton. I preferred to be in my room with my music, but I sure made time from my busy schedule for Julie Barnes and Liz McIntyre! 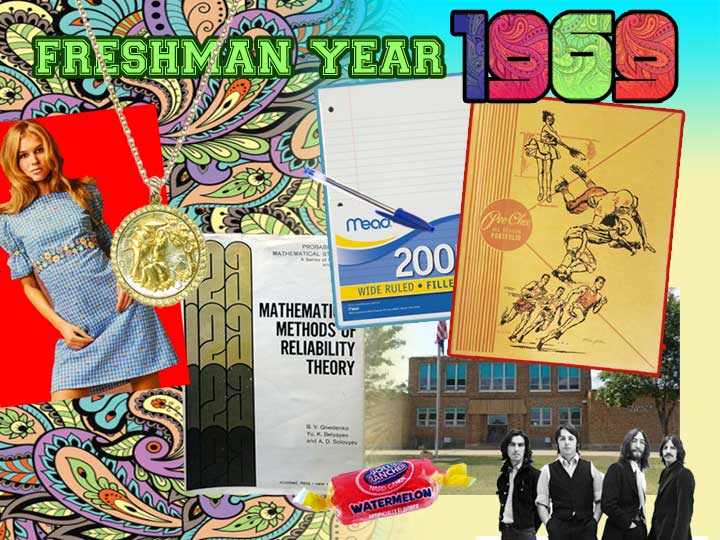 Fashion changed, and I found myself changing with it. In 1969, I bought my first medallion. I thought it was so cool hanging around my neck. Serious clothing changes wouldn't happen to me until 1970, but the root of fashion was beginning to take hold. In style during this time were Nehru jackets, chain medallions, love beads, and bell bottoms. Paisley was also very popular, as were ruffles, ring belts and fringe. Though I wore mostly jeans and T-shirts, I had a gold medallion on a chain. In my city, the school dress code was still rigidly enforced, and girls wore dresses. Mini-skirts were allowed, and of the three fashion skirt sizes of the era, mini, midi, and maxi, teachers preferred the midi. Teachers' preferences usually never won out and girls still weared mostly the minis.