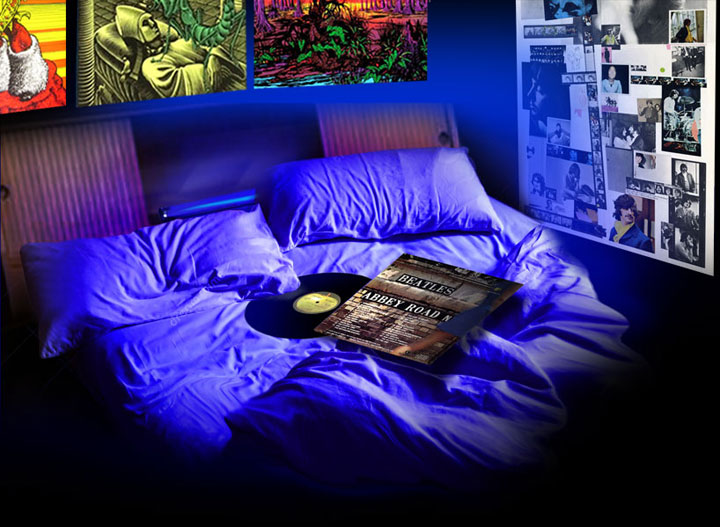 I had a black light in the headboard of my bed; that old double-bed, the one I'd inherited from my parents after they bought a new one, was where I spent many hours just listening to music and studying the posters under the purple glow of ultraviolet light. Memories of The Beatles' "Abbey Road" are never stronger than when I recall this time in my life.

Undoubtedly, one of the finest harnessing of powers in my bedroom was the introduction of ultraviolet light-otherwise known as a "black light". My exposure (pun intended) to "black lights" came in 1968 and I began collecting the epic (and now famous) posters that came out. This new ultramarine glow was the innersanctum and the deepest level of hippie-dom. In the dark with a mist of blue cascading up from a narrow fluorescent tube was the guiding light. It was beyond cool how it turned most white things to a bright blue, and skin to the deepest, weirdest tan of all. 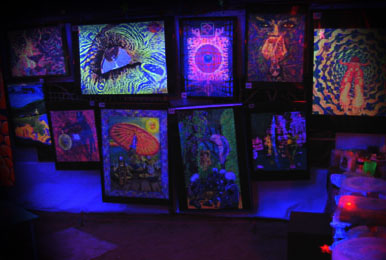 By early 1970, I began to collect black light posters as quickly as I could as a wider selection became available. Record stores began housing them in Black Light Rooms. These were notorious ambient spaces usually separated by a sheet, tie-dyed curtain, or curtains of hanging beads. Most of these stores and headshops carried them as regular items. They used to have these bins, or shelves, and the poster would be rolled up and sealed in cellophane. On the end of the roll was a tag with the bin number on it. The posters on the wall had the same corresponding bin number, so all you had to do was pick out your favorite, go to the bin, and try to find it. Yeah, right. My favorites were usually sold out, and I had to go to smaller, more out of the way stores and pay a dollar, or 50 cents extra for the best ones. It was a blessing that headshops usually carried a decent selection. I bought my best posters at headshops. 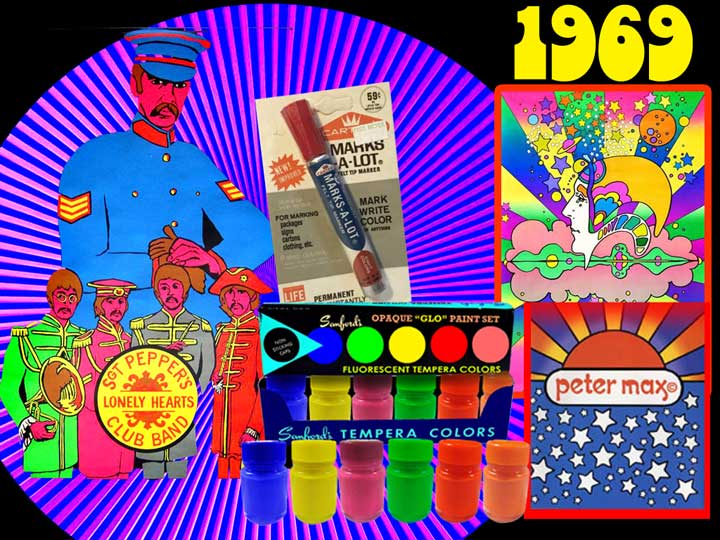 Florescent paints were awesome! The greatest invention known to mankind was contained in a series of brightly colored jars known as "Day-Glo Colors or "Fluorescent Paints". 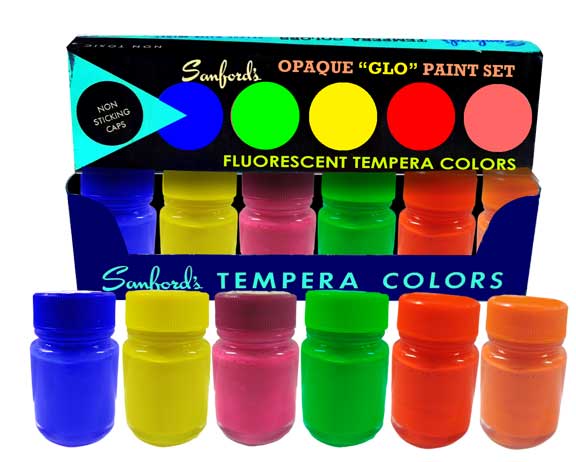 Interestingly, they also glowed in daylight if natural sun was available. It was great to just set them up on the dresser as they were illuminated whenever the old black light was on. They cost around a dollar a set, and the set came with a brush. Blue is my favorite color, and I used as much of it as possible. I had to reinforce my paint sets constantly. Pink rarely got used, but it was a great color under ultraviolet. Orange was barely discernible. I'm RGB color blind, so that would explain a lot. Yellow was a great color, as was Green. I really liked red as a glow color, but it was hard for me to work with as it seemed kind of a darker orange color.

My biggest breakthroughs came with the mixing of colors. The final outputs were not so great, but the experimentation was interesting. I soon realized that the fluorescent paints worked best with primary and secondary colors only. Purples, browns, and shades of blues and greens were places you just didn't want to go. They in fact created the finest mud you could ever hope for. Next came my disastrous attempt to create a "glo black". Lots of money was wasted on paints being wasted. In the end, my inventions led me to the question: "how do you create a neon black?" Obviously, I wasn't the brightest kid in the class. I realized that there were just some things that science needs to leave alone. 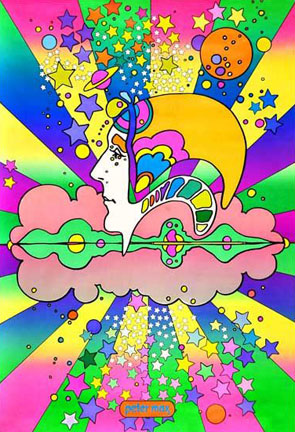 My first artistic influences of the psychedelic order were Peter Max, and most album covers. Without going into his history, Peter Max was probably the most famous poster and pop artist of all time. He was an extreme innovator and influenced an entire generation with his works. I know that I painted hundreds of "Max-ish" posters, and went through gallons of fluorescent temperas in the process. One of the leaders in that day of bottled tempera paint was Prang. They would have loved me and would probably have sent me Christmas cards every year. Soon, I was painting Max-style almost 100%. I almost lost my own true identity in the process. It wasn't until I picked up my first "foil-covered" Steppenwolf albums that I began to "Un-Max" myself, and find my true artistic identity again.

I was young, and knew nothing of posterization, Lithos, block prints, or any of the offset print tricks of the times. All I knew was that this new art form was incredible, and it not only balanced my creative self, but changed it forever. Experimentation was the new word; Try it all, do it all, live and grow. And grow I did.