Batman Et.Al   The 80 Page Giants   Funny Comics
Gold Key-The Best Comics of All
Famous Monsters of Filmland   The Masque of the Red Death 1964 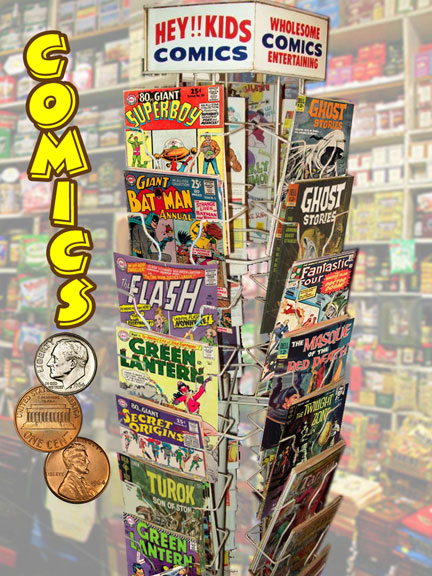 I wasn't a serious comic collector or anything, so my memories are only based on the ones I had as a kid. The most memorable comics for me were the ones with ther really bizarre covers. Two that were my most cheriished both belonged to Batman. I have really vivid memories of the "Human punching Bag" and the "Two-Way Deathrap" issues. 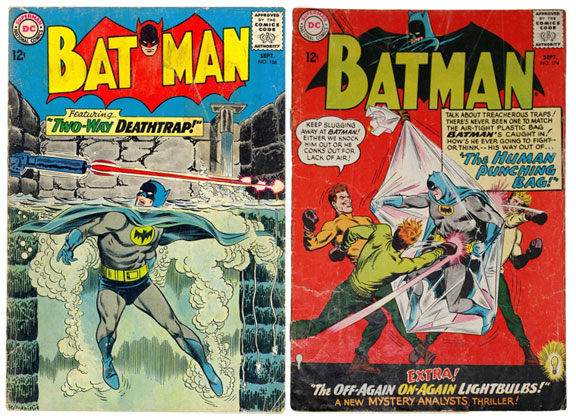 I was first introduced to comics in 1963 by a neighbor kid. It wasn't long until I was buying them all.

Batman stayed a true favorite of mine for the longest time. Like Dick Tracy , he battled a slew of bizarre characters that were quite a challenge for him, and for me to even comprehend their presence! I think my favorite Bat-Villain was The Riddler. 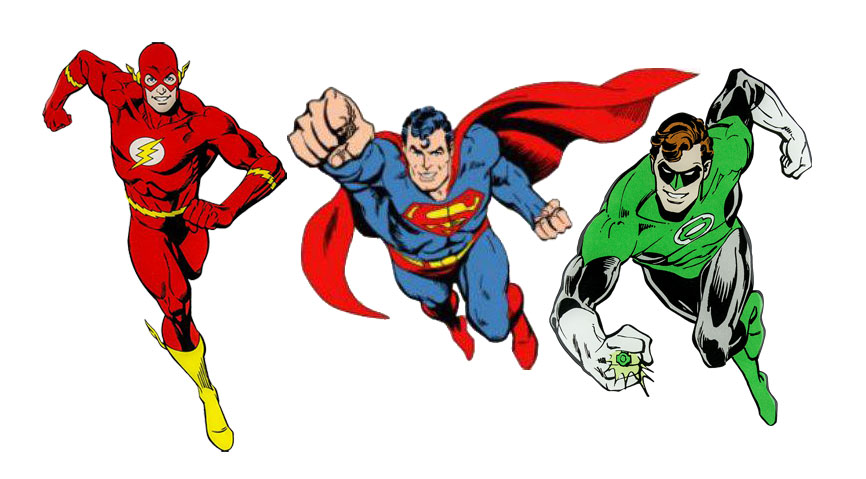 My other favorites were: The Flash, Green Lantern, and Aquaman. I had a particular interest in The Green Lantern. The Flash was my second favorite. It wasn't long before I was drawing all of these characters (or at least doing my best), and creating newer dangers for them all.

There was nothing better than the 80 page giants! I remember when they first came out, and the excitement we all felt going out and buy our first one. I think my first 80-pager was "Justic League of America", or maybe The Flash. I can't remember for sure now, only that I loved them.

It wasn't long before I was investing serious quarters into the magnificent 80-pagers! Trading them became quite commonplace. I used to be really fascinated with the "Justice League of America" for all of the great superheroes in the group. 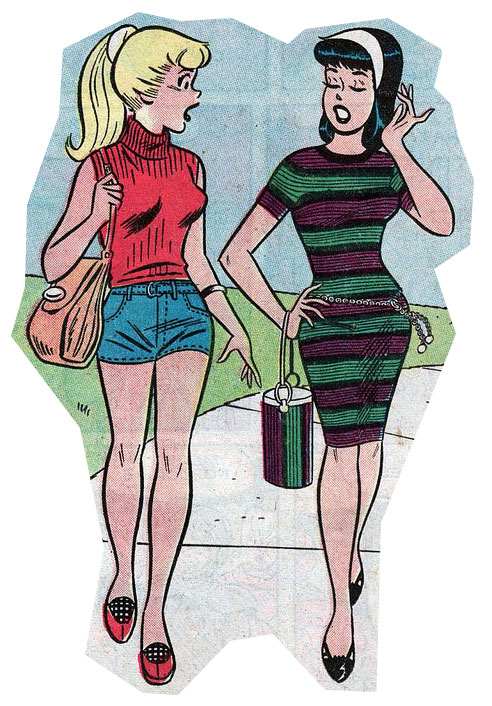 Besides the action super heroes and the creepier Gold Key books, I really loved the simplistic and funny character comics like Sad Sack, Richie Rich, and other simple cartoon characters. In particular, I was crazy about Jerry Lewis comics. I loved anything that had to do with his nephew "Renfrew" also. Like most guys, I had a secret crush on Betty and Veronica-Veronica especially, and read Archie comics relentlessly only because of them.

It was interesting to note that dark-haired women in comics were usually villains, or associated with evil deeds. Not true in the case of Veronica, even with her Betty Page bangs! Yet, at the same time, dark-haired women were also heroes like "Wonder Woman" and "Batgirl", or real stand-up gals like "Lois Lane". 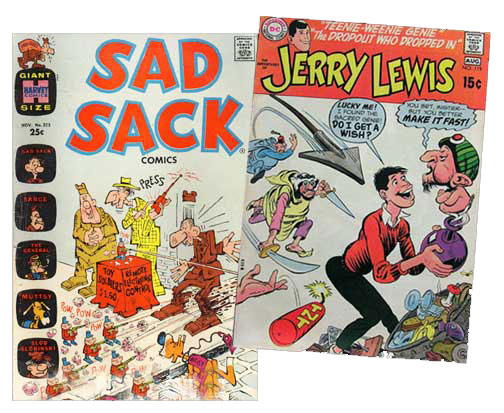 I don't think I spent as much time with Archie comics, or Betty and Veronica; it was the others like Sad Sack, Richie Rich, and Jerry Lewis that mostly held my interest when it came to "funny" books. Jerry's mischievous nephew "Renfrew" was one of the best side characters I'd ever seen and I couldn't get enough of him! Sad Sack or The Sarge were also tops with me in this category. The comical comics got traded very quickly, but I maintained a huge collection of Jerry Lewis and Sad Sack.

They always had the best comics- in my opinion, simply for my love of monsters, fantasy, sci-fi, and of course, television. Gold Key did lots of TV show and movie comics. 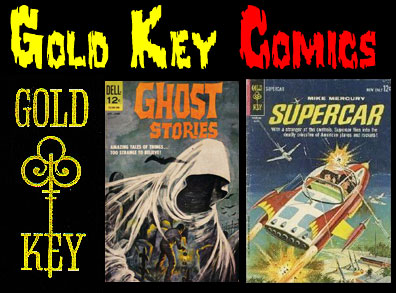 Twilight Zone and Outer Limits comics were as much fun as the TV shows. The only difference was, I could read these comics over and over again. 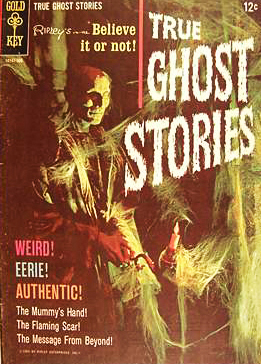 "Voyage to the Bottom of the Sea" was a great show and a great comic. One of the things that I loved so much about Gold Key Comics was that they had all these great TV comics with even more plots and more "show" stories than there were shows! 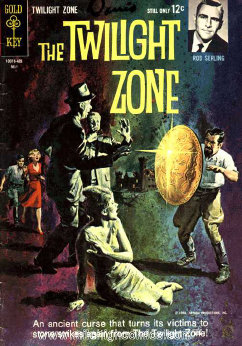 "True Ghost Stories" and "Ripley's Believe it or Not" comics were my absolute favorites. No other comic in the world ranked with these. There were some great stories that I always thought should have movies or TV shows. It was fun to hide away somewhere with a bag of chips and peanut butter sandwich flipping page, after ghostly page.

These comics had fantastic stories! Especially the "True Ghost Stories" because it was like reading a book of short ghost stories accompanied by panel after panel of delicious artwork. I literally couldn't wait for the next issue. I read them over and over again, and to this day, I can still visualize some panels and dialogue with the annoying stuttering: "I-I can't!" or "W-Wait, stop!" Dell Ghost Stories also were my favorites, and I think I read more of those than anything else.

One of the memory triggers that do it for me with these comics was when my parents would go to the Franz bakery outlet and buy Dolly Madison snack cakes in bulk for discount prices. They were the best ever--even better than Hostess. There was one great story about a woman that kept appearing on a deserted highway, and a man swerving off the road trying not to hit her. Great stories these were!

Famous Monsters of Filmland had in me, a most loyal fan. One of my first and favorite magazines from them was this Hunchback of Notre Dame issue from 1965 . It cost me 50 cents, almost all of my allowance, but to me, it was worth every penny. During this time, Famous Monsters only came out bi-monthly, so it was a long wait in between issues. Just as there were Hollywood star magazines, this one was basically the same thing only focused solely on monsters. My first and only Hunchback experience was building the Aurora Model. 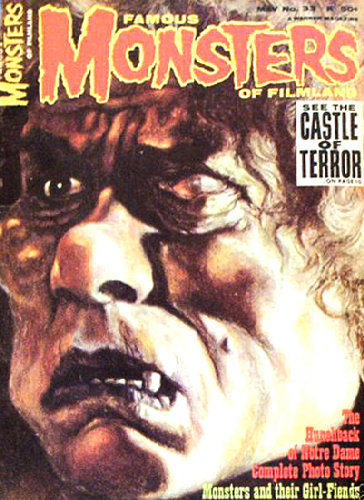 From that day forward, I was captivated by such a unique monster. Little did I know then that Quasimodo was anything but a monster. He was in fact, a hero. 60's revolutionaries protested the system; Quasimodo poured molten metal on it!

I only knew of some of these monsters. Many of them were stars of movies that I'd never even seen before. They now live in the celluloid archives of B-movies that can be sometimes referred to as "Psychotronic". English translation: cheapo drive-in flicks designed to get teenagers out of the house. They usually showed in double, sometimes triple features. 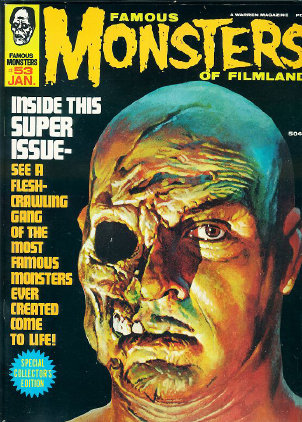 Among these great drive-in masterpieces were "The Amazing Colossal Man" (who graces the cover of the FM mag at the right), "The Killer Shrews", "Teenagers From Outer Space", "Invasion of the Saucer Men" and the most memorable "Attack of the Giant Leeches" . Anthony Quinn portrayed the Hunchback in a movie that I still haven't seen. I saw stills from it in one of these FM mags and was obsessed with seeing it. Another great feature that I loved about Famous Monsters of Filmland were all the great letters from fellow kids-a population I could identify with! There were also drawings done by fans that I really liked. One of the greatest features of all was the editorials by Forrest J. Ackerman. 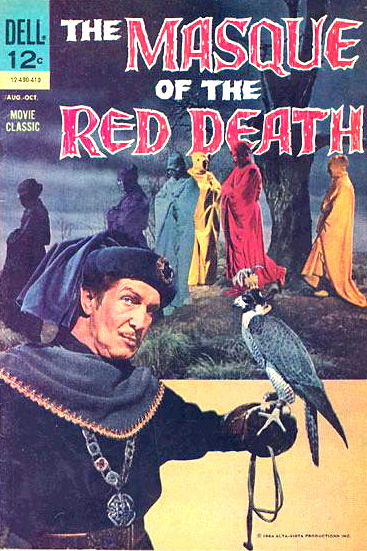 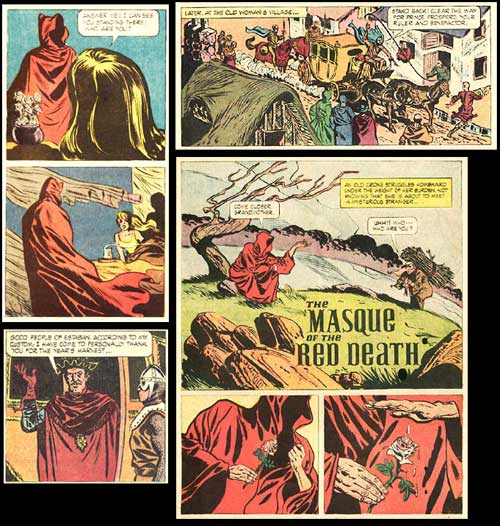 On the day that I bought this comic, my mom, my brother Pat, and myself all went over to stay overnight at Merle's house, my mother's best friend. It was an unusually gray day for August , extremely dreary and not like summer at all. It was eerily apropos that I'd purchased this particular comic.

It was a long walk to Merle's house, perhaps a mile or more. I remember reading this comic in their living room, seeing the weird gray skies out the window. Merle had lots of kids that I always played with, but for some reason they were all gone. I really love to think about that particular weekend, and just how free and easy my mom was to just decide to go spend the night at her friend's house. That night I stayed up watching an old WWII movie where some soldier got ran over by a tank.

I was fascinated by the characters in the "faceless robes" . They seemed so odd and haunting, and unlike anything I'd ever seen before. This is definitely a splendid facet of the 60's; it's what you didn't see that scared you.