Nothing scares children more than losing their sense of safety and well-being, or seeing their safe and harmonious world falling apart at the seams.

When parents become frightened and worried, it takes its worst toll on children. Some of the lessons I learned growing up didn’t always come from a school book or a classroom. Some discoveries seemed as if they were better left un-learned. Such was the case of October, 1962, and the dreadful standoff that I would later come to know as The Cuban Missile Crisis.

The famous air raid drills of the fifties had basically diminished in the Portland Public School system. Hiding beneath our desks was not practice we performed randomly. Fire drills were what we performed on a somewhat regular basis. The preparations for survival against nuclear war were not taught to us in school. In fact, I had no idea what “nuclear war” even meant.

Our newly elected president John F. Kennedy was a hero in our household. My world seemed like a brighter, newer place when grown up politics seemed to be going well. In our household, and everywhere else it seemed, President Kennedy brought hope and vitality to our nation. He was certainly a bright spot in our home, and a hero to my mom. However in the fall of 1962, politics, vitality, and hope did not fare well at all—in our household—or anybody else’s. The world was heading toward destruction and an all-out nuclear war, and I had no idea what was happening.

Certain words attached themselves to frightening images long before I knew what the words meant. "Communist" and "Khrushchev" were among those frightening words; they were titles used in context with what my parents regarded as an evil presence in our world. Even now, as I write this, I can feel the dread and fear of those words. Watching adult faces utter them was a directive that all was not well in the world. This condition was not limited to only our household; our neighbors were likewise disturbed. Dads' eyebrows twitched uncomfortably, their faces scowled, and moms took on a decidedly frightened look. 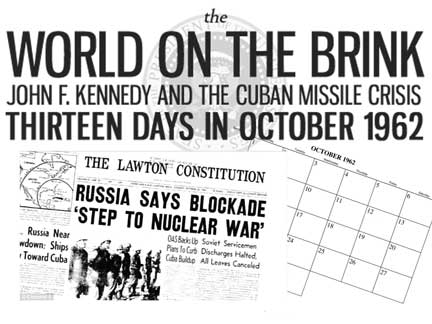 In the early days of October, 1962, the world stopped dead, helplessly gridlocked in a military escalation that promised the direst of outcomes. Though I was too young to understand, or fathom the importance of the time, it scared me to see my parents so frightened. The world seemed to take a strange detour, and nothing was really explained to us. Everything felt dark and unknown. We were left with only the knowledge that our country was in a serious state, and adults were keeping it from us kids.

Those dreaded words "communist" and "Khrushchev" surfaced constantly, and were used in context with what my parents regarded as an evil presence in the world. Soon the word "Khrushchev" attached itself to a human face: a round bald-headed man that became a symbol of malevolence in most American households. During those fourteen frightening days of October, "Khrushchev" was a word that was uttered constantly.

What I recall vividly from those days as a seven year-old, was how our life was turned upside down for a period. The family television that once was entertainment central soon became a morbid and terrifying place of fascination. As I ran around the neighborhood playing war, I had no idea that the real thing was actually taking place. The most terrifying part of all was that this recent conflict could have possibly been the very last war on earth, and the end of mankind.

“Communist” was a word that sounded cold, like a giant prison with slamming steel doors that stole people, trapped them inside, then murdered them one-by-one. My brothers explained their own definitions of communism—and Khrushchev—with all the false detail they could muster. They also had no clue what any of these words really were, and to all of us kids, Khrushchev was simply a face in the news and on television sets.

The first frightening aspect of that period was that Mom and Dad ate from TV trays in the living room in front of the television. My brothers and I sat at the table in the kitchen, cutting up, and doing things we weren't remotely allowed to do such as flicking butter at each other, making faces, or giggling. The fact that we weren't supervised was another of our fears.

When our parental supervision drifted away we became frightened and more aware. We had a stable home where everything was dependable and on schedule. When something came along for days at a time, and disrupted our lives, and our parents kept it secret, we knew something terrible was in the works. We pretended that nothing was wrong, when in fact, everything was wrong. We just didn't know what. For me, that particular October was the most frightening period of American history that I can recall.

The television had always been a trusted and loyal friend. During this period it was not; television offered nothing to us by way of an answer. Only our president, John F. Kennedy, seemed to be present on the black and white screen. His face flickered from capricious reception glitches; his voice droned in serious, deliberate tones mouthing words and sentences that meant nothing to us. We were kids, and President Kennedy never spoke in our language. He never said he "was going to get those guys", or "pound Khrushchev after school". We had no idea of his intent, or why everyone in the world had gone so temporarily crazy.

Making matters worse was the fact that the tension had spread beyond our four walls. Neighbors were becoming more and more troubled. They studied the skies, seemingly pondering something that we kids were blissfully ignorant of. My friends also commented on something being wrong with their parents. In the world, secrets were not being explained to us in a satisfactory manner. Even in school the teachers offered sugar-coated explanations as to recent events assuring us that there was nothing really to be worried about, yet we had fire drills every single day for no apparent reasons.

I remember my class being sent home from school one day. By then, something evil was definitely in the air. In those last frightening days of October, my mother seemed to be the most terrified. Being too young to really understand why, I felt even more unsteady and unsure of my world. Something horribly wrong was happening. Then, as always, rumors began to fly. The older boys in school had a better grasp on the situation, and embellished the facts with horrifying realism. The end of the world was finally near. We younger kids believed it was true. And why wouldn’t we? Our parents were as terrified as we were.

The last days of the military impasse were the worst. My parents no longer ate dinner in front of the TV, but rather paced in front of it, or stood staring as if in preparedness. I'm not completely sure, but I think my mom went into their bedroom to cry so we wouldn't see her. My dad went in to console her. Whenever we asked what was wrong, pat answers like "never mind, eat your dinner," were offered.

Was it finally happening like the older guys at school said? Was the end of the world coming at us? As a kid I didn't know what to think or how to feel. There was no fear in the world that was as great as when my parents no longer seemed to have any control. Life was out of their hands. Keeping us in the dark didn't help matters, but then again, how could they possibly explain the craziness happening between foreign shores and our own?

Then, the epilogue came almost as a thunderous victory. Through the flickering black and white television set, the announcement came that mankind was safe again, and an agreement had been reached. My parents seemed joyously relieved. We all ate dinner again at the table like normal. School was back in session. I, at seven years old, was still without an answer as to the true meaning of it all. The only thing I knew for certain was that one day the world was going to end, and the next day, it wasn’t. Something truly frightening had passed us in that October of 1962. Whatever it was, the crisis was over. My world was normal once again. Those dreary weeks were a pall, and in our house for fourteen days, life seemed to be a chess piece in check.