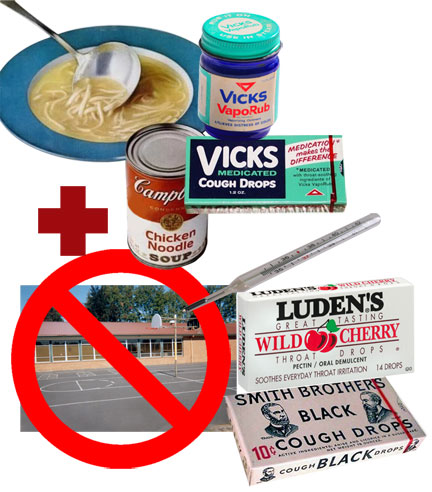 Staying home sick from school was a marathon sport which I excelled at. I couldn't squeeze too many days absent days in, but the ones I did manage were cherished.

I usually fell victim to some catastrophic illness around Sunday evening. The worst symptoms increased rapidly around seven p.m. "Hmmm", my mom began, putting her palm to my forehead, "you do feel a little warm. We'll wait and see how you feel in the morning". That was my ticket; naturally I felt worse in the morning.

The invisible and inarguable sore throat, was like mystifying back pain; the doctors couldn't prove it, but they couldn't deny its existence either. The burden of proof always fell upon the M.D. However, once he brought out his light, shined it in my throat and made me say: "a-a-a-a-a-h-h", then then he had a worthwhile case. "I don't really see anything there," he always said. There were a few things that brought on these illnesses: math tests I wasn't ready for, a really good adventure movie during the weekday TV matinee or comics that needed to be re-read.

The Era of the Great Plagues

The great plagues of the sixties usually began sometime after Labor Day and ended around the first week of June. Amazingly, I was as healthy as a horse during the summer months. When I was sick, I was pampered. My mom would make me one of my usual favorites, peanut butter toast and milk. Life didn't get any better than that. As beneficial as staying home sick was, it could also backfire on me. I had the knack of giving Academy Award-winning performances that could extend my home stay into two days. Usually, a visit to the doctor was in store when that happened. 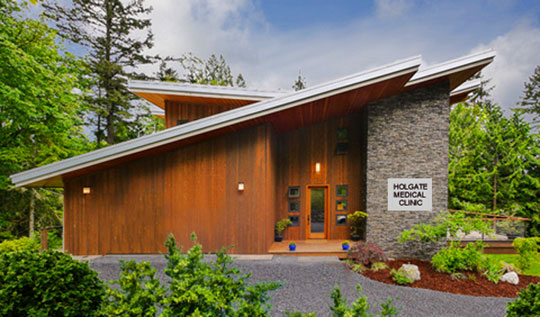 He wore a white lab coat with a stethoscope hanging around his neck. He appeared a kindly man but lacked certain humors to alleviate the fears of children. There was nothing fun about his office. In the waiting room there were vinyl couches and chairs with doomed people sitting in them. There nothing for kids except a toy box in the corner that only held the most juvenile of items such as kiddie puzzles, and giant pull toys. There was also a tall potted plant that I'm sure was only used for nurses to hide behind so they could sneak up on us and grab hold.

Visits to the Holgate Medical Clinic were no fun. There was absolutely nothing to be gained from going to the doctor. First off, the rooms were sterile, brightly lit torture chambers that smelled of alcohol and dread. Each drawer contained instruments of fear designed to inflict the worse pain imaginable on the human body. The waiting room was no better; I waited in fear for the executioner (nurse) to come out and call "Jeffrey?"

The nurse led my mom and me into the doctor's exam room. It was a short walk down that malevolent corridor where even the sterile walls seemed to tremble in fear. Myriad thoughts scrambled through my brain, evoking countless unspoken questions to mom.


"Is this you getting even with me for shooting Pat in the forehead with a rubber tipped arrow that was missing the rubber tip? Or is it for the time I roasted marshmallows on the front burner of the stove? For not eating my peas Wednesday night? For playing Tarzan on the roof of the garage?" 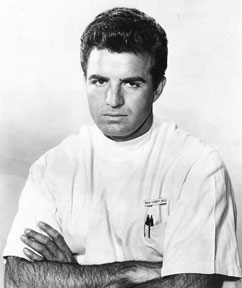 I lived in fear of the doctor. It didn't matter what I had; I could have a tiny bump on my head and he always gave me a shot in the butt. He had a needle that was three feet long that he only used on me. In my short youth, I had seen so many visits to the doctor, and each visit ended the same: with a plastic plunger and a long needle.

Of all the episodes of "Ben Casey" that I watched, Ben never betrayed his patients. He never gave them a shot in the butt. Dr. Casey was a true humanitarian. Our doctor was a sadist. I spent the bulk of my formative years fearing the word "penicillin." However, I can gladly say that he didn't get off so easily. It took six nurses, three police officers, eight healthy Marines and my mom to hold me down.

The snippets of conversations between the doctor and my mom dialogued like this:


"Oh, he's fine. No fever and he can return to school tomorrow. However, we'll give him a shot just to be safe."
Just to be safe?! You just said I was okay!"


I swore that when I got older and bigger, I'd track him down to the far ends of the earth. And then, do you know what he'd get? You guessed it, a shot in the butt. I even went so far as to think that I might actually see him on the street, or in the grocery store. I could imagine him coyly whispering to his nurse, "There he is! Get him, and get his pants down." 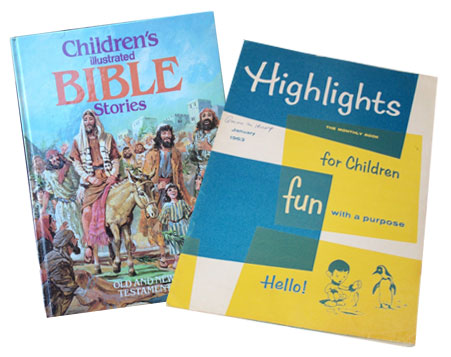 On the days where I knew I was free and clear, when it was just a follow-up visit and I had nothing to fear, I had time to pay more attention to my surroundings. It was during those times I realized that the waiting room didn't have the proper reading material for guys my age. All they had Bible Stories books Highlights Magazines. Where were the Mad Magazines or the Famous Monsters of Filmland Mags or even Superman comics?!