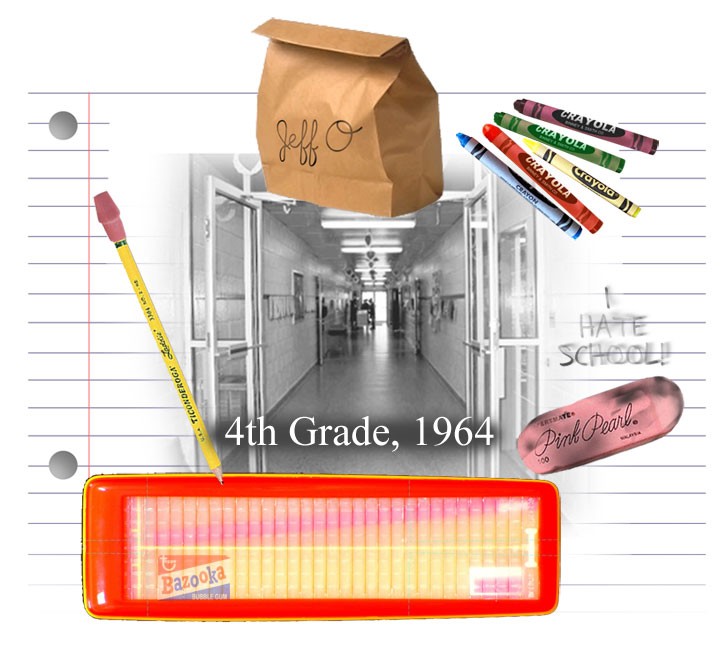 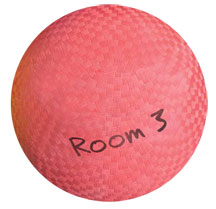 I had successfully begun my fourth grade year by stealing all of the activity balls to our classroom. In our garage, I must have had ten, or more stashed away. I had no idea why I did it, I just did. Anyway, I ended up kicking them over the fence, and back into the school yard. I guess I was just crazy about those balls! 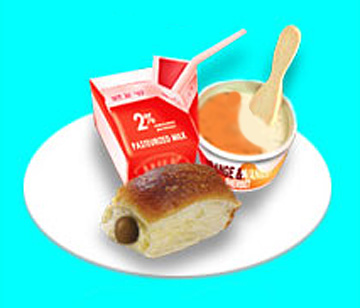 Kudos to any one of you out there who remembers that sacred event known as "Hot Dog Day." I'm not talking a mere cafeteria menu item. This was an event. It happened maybe two or three times a year. For a small sum of 75 cents, you received a wiener wrap, milk, and an orange sherbet-vanilla ice cream cup. Plus, school classes ended at noon and the rest of the day's activities were spent outdoors for recess.

I can remember spending the afternoons outside playing kickball with the entire school in attendance. Every grade level was out and involved in some sort of game or activity. I don't know what inspired those "hot dog days", but they were the best event ever. 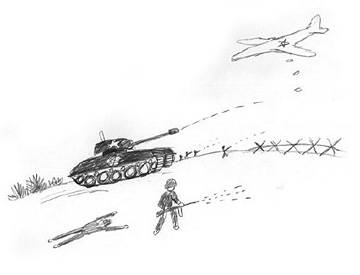 More and more, I was drawing amazing battle scenes of blazing world war II action. Largely inspired by my favorite show "Combat!, I set out to replicate the glorious battle scenes of WWII as accurately as I could using a pencil and an untamed imagination.

Usually they always looked the same, but it was a challenge day after day to create newer and more unique drawings. I also tried incorporating planes, and tanks and other fascinating vehicles in my vivid scenes of war.

Whenever my imagination became overly exhausted, I attempted to draw jungle scenes in epic detail featuring another of my all-time heroes: Tarzan. My army drawings continued though, and I eventually got more and more detail into them. I added many more soldiers, and as soon as my paper was filled, I'd be off on another drawing. I must have drawn thousands of these WWII images. It seemed like army and monsters were all I was interested in at the time.

A Whale of a Tale 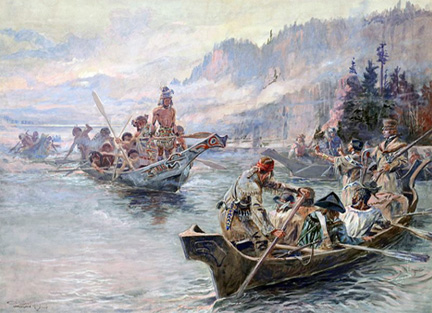 As a student at Barlow Elementary School, I was really nothing to brag about. I had no interest in most subjects, and was not much good at anything except art. In class we'd been studying Lewis and Clark, learning all about the Oregon Trail. Perhaps my fourth grade version of this history was rather sugar coated compared to later readings and historical documents. Still, we'd spent quite a bit of time on this portion of American history.

Once a week we'd watch an educational television program that featured a character called "Bucky Beaver" which chronicled the exploits of Lewis and Clark. Prior to show time the teacher brought in a TV set on a tall rolling cart. We watched Bucky's version of the famous expedition. My favorite part was with Sacajawea and how she guided them to the Oregon territory where I, was born and raised. The series concluded with the building of Fort Clatsop where I'd visited many times during our summer vacations to the beach. 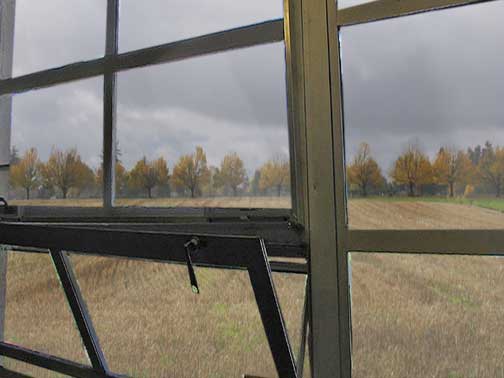 Daydreaming out the classroom window on rainy days was probably the reason my report cards weren't in my favor. It seemed like the darker the days, the longer they were. My attention span didn't seem suited for the colder months. Actually, I didn't fare any better during the sunnier months either. It didn't matter what year Columbus discovered America. What truly mattered was that it that very year of 1964, John, Paul, George, and Ringo discovered America. Columbus hadn't even made the Billboard top 100!

I was, however, keenly interested in Lewis and Clark. Perhaps it was because the TV program "Bucky Beaver" made their history so interesting. We used to watch Bucky in school. The teacher would wheel in the TV on a tall stand, plug it in, and away we'd go into PBS history.

Our Old White House Behind My School 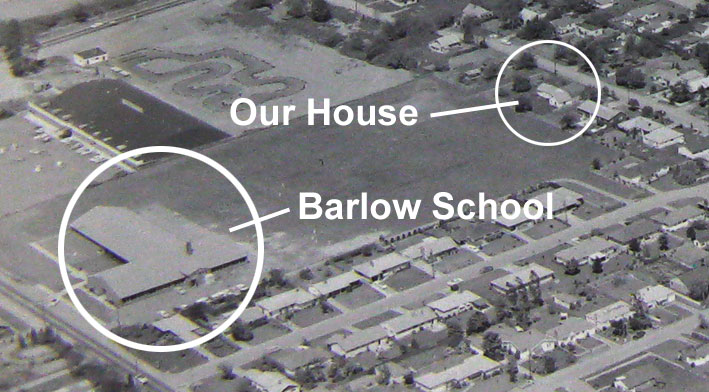 By late Spring of 1963 I was finishing off third grade when we moved into a house on SE 96th Avenue just off of Bush Street. This is the house and the time that carries the most profound and wonderful memories of my life. From our backyard, we looked out at the playground of Samuel K. Barlow Elementary School. We lived on an old dirt and gravel road at the top of a steep hill which led down to Powell Blvd. Our house sat directly behind the school field facing the back of the school. I had to cross that massive lot every morning on my walk. This was a time of prolific discovery for me, and just about every major event in my life worth talking about happened at this house. 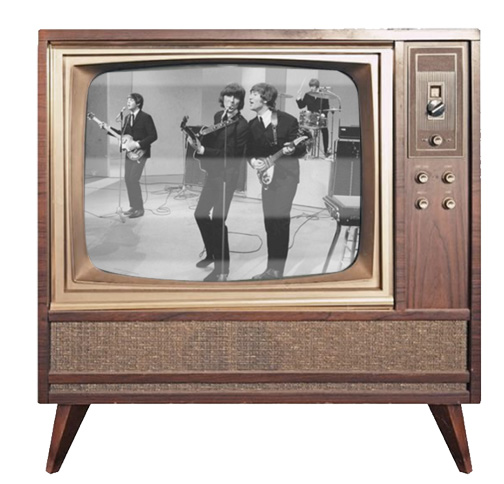 I bought my first Aurora monster model-The Hunchback of Notre Dame at the local Pay N' Save at Easport Plaza. This was my first introduction to Aurora monster models, and I was absolutely mesmerized by it! I couldn't wait for my monthly allowance so I could collect more and more of them.
By February of 1964 The Beatles exploded into my young world appearing on The Ed Sullivan Show for their major U.S. debut. What an exciting time it was, and no words can ever truly describe the magic of that moment, though I do talk in depth about it here. New classic shows like "Bewitched", "Gilligan's Island" and "The Addams Family" launched during this time.

Plastic Monsters for Only 10 Cents! 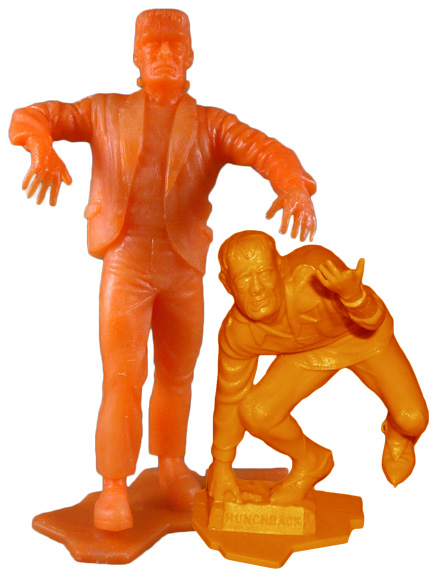 I received $2 a month which I promptly spent on monster models at our local Pay N' Save, or in the toy basement at Newberry's at Eastport Plaza. Among my favorite discoveries there were the Universal plastic monster figures that sold in a giant bin for ten cents apiece. Each time I found myself with a dime I'd trot on down to Eastport Plaza to pick up an new monster figure. The only one they didn't have was The Creature, so I never got that one.

I couldn't believe how magnificent these figures were! Such wonders I never imagined and only for a dime. Now, in 1964, a dime was still a good piece of change, but it wasn't like a dollar; a dime was more easily gotten by trading in bottles or saving some pennies. And like my Aurora monster models, I began with the Hunchback of Notre Dame. The next figure I collected was Frankenstein. I even tried painting them like I did with my models, but that didn't work out too well. 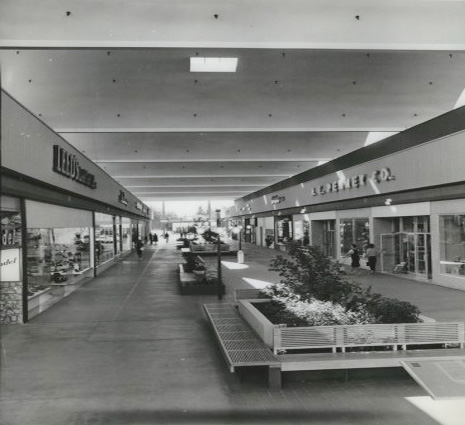 Eastport Plaza was the first true strip mall in SE Portland. At a construction cost of five million dollars, it opened its doors on October 27, 1960. This was where the J.J. Newberry store was where I spent much of my money on packaged toys, army men, and of course, the plastic monster figures mentioned above.

Pay N' Save was there too. Barlow Elementary School was situated on SE 92nd avenue near Powell Blvd. John Marshall High School sat below it a little farther down the hill, and below that was Eastport Plaza.

Of all the corner and neighborhood stores I can recall in my life, none made me as happy as Food Fair on Powell Blvd. near Southeast 92nd Ave. The Food Fair stores were fairly large, but this one was more like a small neighborhood store with an outdoor fruit and vegetable market in the summer. I visited this store so many times, and many of my favorite discoveries were found there. Among them was: 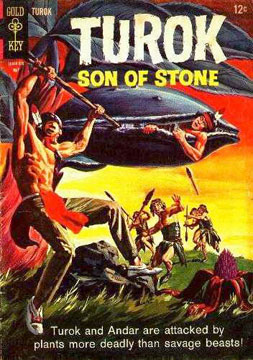 "Turok, Son of Stone", the first comic book I ever purchased there. Usually, I just traded army men, or other odd things for comics until I got a stack worthy of trading back and forth. Once I saw the cover of this comic, I had to have it! I can even remember now, what it was like buying it. Ever since, Gold Key Comics have been my favorites. Also, my first-ever 80-Page Giant comic was purchased there. 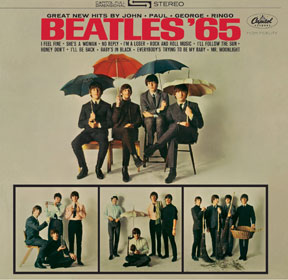 The Beatles '65 album brings back super strong Christmas memories for me. I think I must have played "She's a Woman" a billion times.

The area has since been swept away by the freeway that is now known as I-205. I still feel very sad about this, because there is no way to go back again and just re-capture memories.