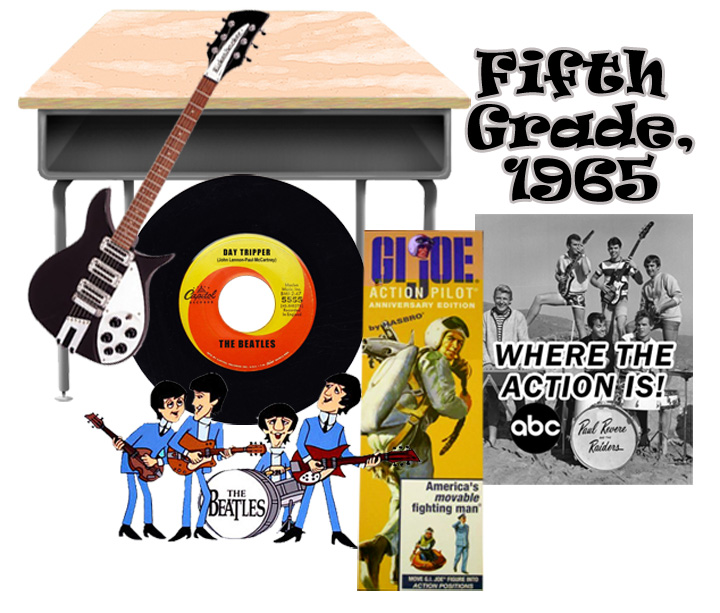 Fifth grade was off to a very rocky start for me. We'd moved yet again, and I went from having lots of friends at Samuel K. Barlow Elementary School, to having no friends at James Youngson Elementary which became my new school. I made a friend eventually, and then I made more as time progressed. One of the kids in my class went on to be my absolute best friend, not during that school year, but much later on as we re-connected around 1968-69. 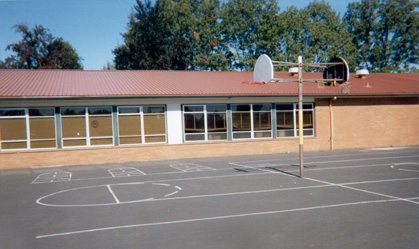 My teacher's name was Mrs. Papperini, and I liked her alot. Fifth grade was interesting as the subjects were becoming a bit more challenging. There were far more movies in the classroom, and we took one fun field trip to our local Alpenrose Dairy. 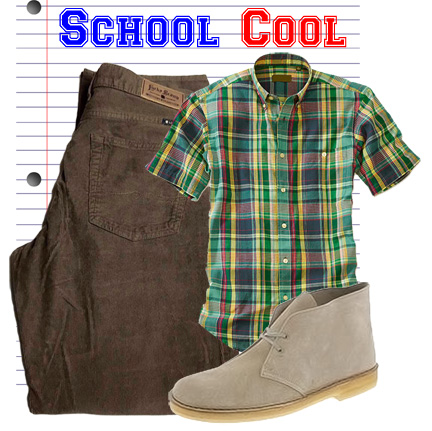 Fifth grade was also a time of serious fashion changes; Madras shirts and corduroy pants were the rave then. We often called the loops on the backs of Madras shirts "Fruit Loops", and the cool thing was to come up behind someone and rip it off the shirt. Any guy who had the "fruit loop" still intact was the coolest in the class. My classroom faced the playground blacktop as pictured in the photo. This gave me plenty of daydreaming opportunities.

Just after Christmas, and the new year switched over to 1966, a new and exciting TV show happened: Batman. Though it was campy, and I knew it was poking fun at such a great character, I still watched it and loved it.

Where The Action Is! 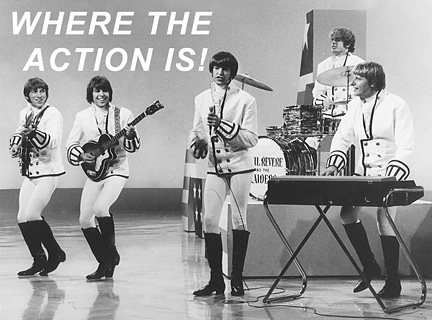 "Where The Action Is!" was an afternoon show that played everyday at 3:30 pm on channel 2. I had to run home as fast as I could in order to make it on time. This was one of the most entertaining shows I could think of, with lots of great music and appearances by my favorite groups and performers. There was lots California beach party fun, and during the colder autumn months, it was very exciting to see.

Dick Clark, who'd been the voice of my generation and generations before me, created this show, along with regulars like Paul Revere & The Raiders whom I was crazy about! There were lots of fun regulars-including a Paul McCartney lookalike musician named Keith Allison who eventually became one of The Raiders. One thing was certain among all of us kids at school: we were all crazy for "Where The Action Is!"

My 1965 was setting the beat for my life! Things were getting more and more cool as America slipped further into the "mod" zone. Music was now one of my favorite things, and The Beatles were still at the tops of my list. 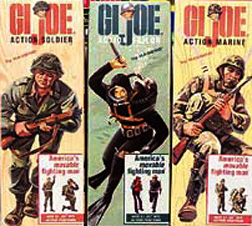 G.I. Joe was another of my fascinations, and he made up the entirety of my 1965 Christmas list. This period really makes me think of the Action Pilot figure, and during those earlier, pre-Christmas days of fifth grade, G.I. Joe was constantly in my thoughts.

That fall I discovered for the first time Pez candies that came in their own dispenser. I thought that was a very cool thing-especially at a very affordable price. 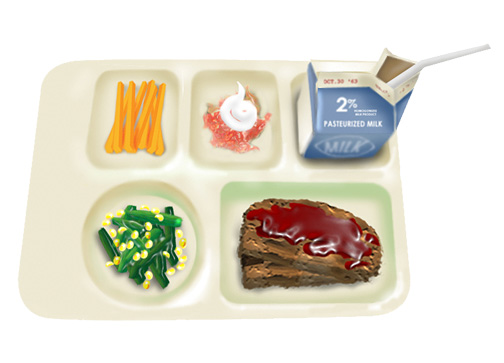 School lunches were very good! I would get real hungry trying to digest math, but thinking only of food. I always preferred our school's "Meat Loaf Tuesdays", but just about everything they made was good. Perhaps it was the mystique of having it professionally prepared instead of mom dishing it up at six o'clock every evening.

The lunches in 1963 cost around 25 cents. Milk was a 3 cents. On the cold and frosty mornings, when it was a bit dark outside, and the rain was coming down, the radio station would announce the school lunch for the day. They always made it sound so much better:

style="line-height:150%;"Check out the official school lunch menus for the month of October 1964!

And Then There Were Pop Tarts 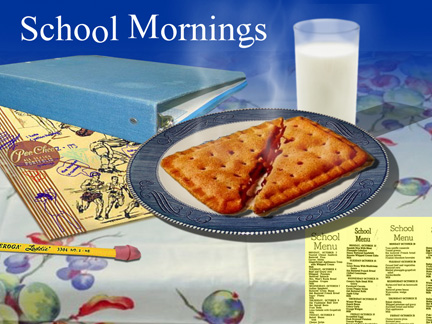 Another amazing discovery was Pop Tarts. Straight outa' the toaster hot n' delicious Pop Tarts jump-started my mornings before school. The first flavor I tried was blueberry, though strawberry and blackberry became my favorites. I always acquaint Pop Tarts with the song "Flowers on the Wall" by The Statler Brothers as that song was playing on the radio when I had my first Pop Tart. I recall that school morning well as it was raining and very cold out. It seemed a bit dark outside, and the last thing I wanted to do was go outside in the rain. That first Pop Tart really picked me up.

If It's Mattel, It's Swell: Vroom-Vroom! 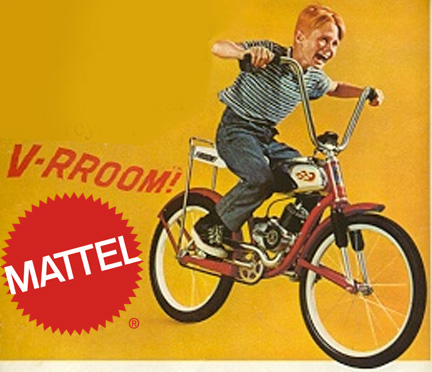 The first friend that I made in school had the Mattel Vroom Engine on his bike. I'd never seen one before. I didn't particularly like the look, and thought they made a Stingray look kind of stupid. Personally, I was always happy with a plain old deck of cards to clothespin to the spokes.

One kid even use balloons at one time, and they made a really cool sound as well. Sorry Mattel; twenty-five cent playing cards and penny balloons made cool motorcycle sounds too. 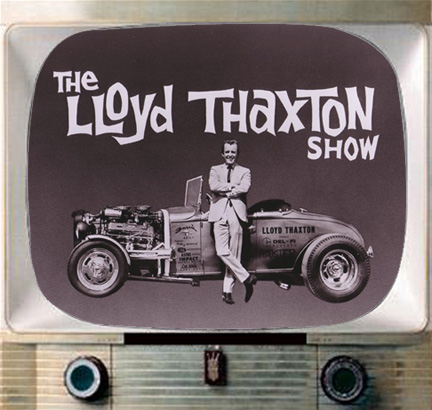 The Lloyd Thaxton Show was one that I never missed. It came on in the early evenings every night at 5:30 on channel 12. This was the first time I'd ever heard The Beatles' "Day Tripper" and I was practically doing backflips off the couch. It was the greatest song I'd heard ever!

I really loved The Lloyd Thaxton Show-especially whenever he'd kneel down on a pair of shoes giving the impression that he was super short. It was hilarious! Overall, the show was the next best thing to American Bandstand and it was on every evening.

The Phantom Comes to TV

"The Phantom of the Opera" finally made it to television that year! I was so excited I was sure my mom would let me stay up to watch it. After all, I'd waited years to see it! (1 year to be exact; it felt more like 10 years). However, since it came on at 9:00 pm which was my bedtime, mom said no. So, I sneaked under the kitchen table and watched the whole thing from the sanctity of the cold tiled floor. I was truly lucky that my parents decided to watch it simply because "there was nothing else on".

The Phantom was a sad and cruel revelation, for it was really short on horror and long on opera. For a kid, the Hammer Films Production of The Phantom was probably the most entertaining and inventive. The sets were by far the creepiest, and there was even a demented assistant to the Phantom in his kingdom of the sewer system. Herbert Lom, in my opinion, is still the greatest actor to ever play this character.