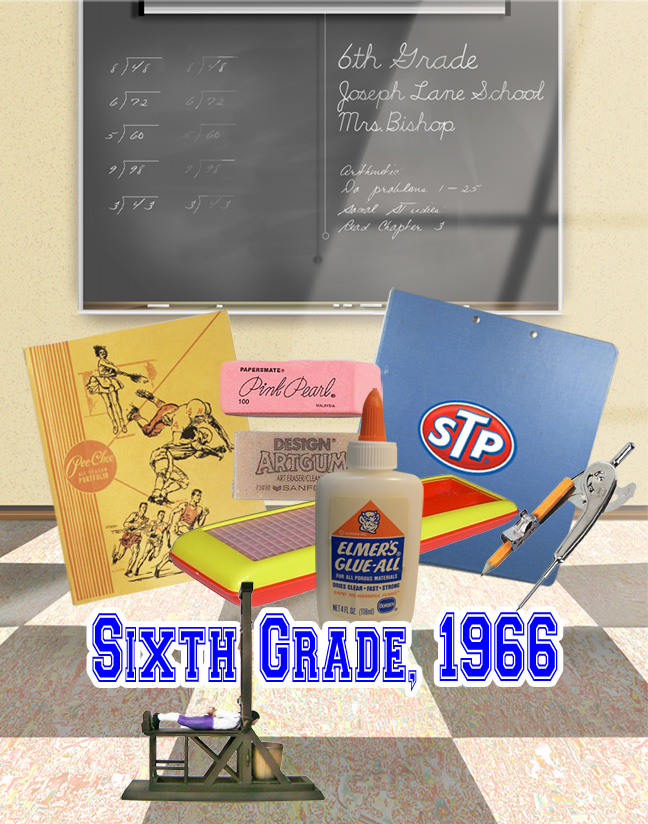 Sixth grade was a new start to everything; for one thing, I met a new best friend who would remain that way for nearly the rest of my life. We were inseparable, and our adventures were legendary. Some of our adventure were almost Hardy Boys style, albeit very stupid. One of such involved tracking down a very dangerous older kid whom the police were looking for as he'd stabbed someone. The reason we did it is long, but we did. Fortunately for us, we never found him.

My teacher was Mrs. Bishop, and she was a great teacher. I enjoyed her strong southern accent, though I can't remember exactly where she was from now. She was definitely a no-foolishness teacher with a strong no-foolishness policy, and confiscated enough toys and articles of candy to open her own store.

Off With His Head!

I had just purchased the new Aurora model "The Chamber of Horrors Guillotine" . I had also made the tragic mistake of taking it to school with me after its completion. 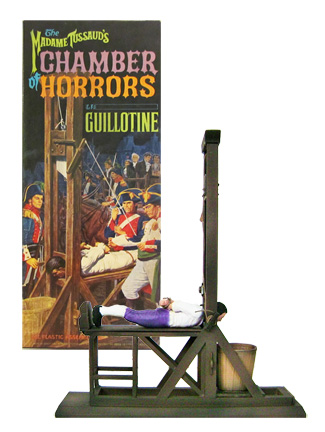 For any of you that may remember this model, you could actually chop off the head of the victim tied down to the platform. This was great fun at home, thrilling in the school yard, but during sixth grade English, it was just plain foolish.

The plastic head flew off, and rolled across the floor. The teacher's eyes went right to it. Forget about the fact that I was scurrying across the floor like a rat trying to chase it down. Forget even that the whole class had turned to see what was more interesting than past tense verb conjugation. It seemed that perhaps I should have been beheading my prisoner during history, because I was then prompted by the teacher to give an factual lecture on the history of the guillotine for the entire class.

"The history? Well...I've had it for about two weeks."

The guillotine went home with me that day, accompanied by a note from the Principal for my parents to call the school. He was concerned by my bringing such a "morbid toy" to school. Thankfully, my mom thought he was ridiculous, and told him so.

"The Goop is the Life" -Count Goopula 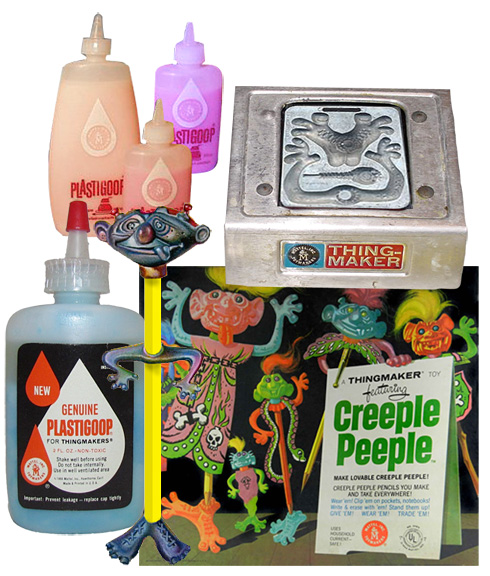 On the day that I'd saved enough money to buy one of these sets, "Georgy Girl" by The Seekers was a hit song on the radio. I can't hear that song today without thinking about my "Thingmaker" . The smell of the plastigoop bubbling was unforgettable. You could also mix the colors and make swirls and get wild color blends. This set came equipped with neon colored hair and a paper cut-out wardrobe for the Peeple.

I later got the "Fright Factory" set, but it wasn't as great. It seemed like it would be the ultimate, considering my love for monsters and horror movies. It was however, a "grave" disappointment. The creations were too goofy looking. The box was better than the whole kit. I also had creepy crawlers which wasn't much better. For me, the Creeple Peeple set was the best set to have. It made real toys, tangible creatures that lived on a pencil. 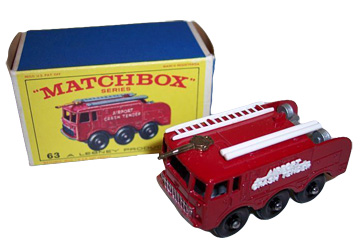 Matchbox Cars became a sweet obsession. I collected them and had an almost complete set. I lose track now of just how many there were. My first ever Matchbox Car was the Airport Crash Tender. On the day that I bought it at Newberry's toy basement, I'd been watching "Family Affair" on TV, and listening to "Up, Up and Away" on the car radio on the way to Eastport Plaza. My three favorite Matchbox Cars were the Crash Tender, the London Bus, and the BP Exploration truck. The latter, a white, 6-wheeled vehicle that looked as if it might be aquatic, was perhaps, my all-time favorite.