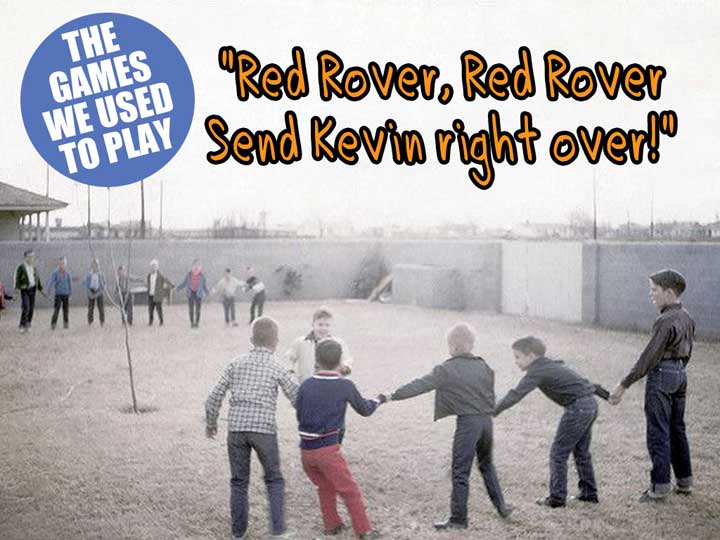 Outdoor games were so much fun.

In fact, playing in the street was not a big deal at all. We simply moved to one side whenever a car came by. Back in those beautiful days during the 60's, few cars did come by, and for the most part, we could play without interruption. Though street games often became tedious, we used to sit around and do bike tricks in the street for fun, trying anything new and potentially dangerous. "Wheelies" became the thing to do with a Stingray bike. One kid on our block was the wheelie expert and could ride for almost a city block or more. Then one day, as fate shook its weird magic wand, the front wheel of his bike came off, rolling inexplicable toward a parked car. Panic set in, and when he had to land the bike, there was no front wheel to land on! The result was ghastly and included blood. By the time we finished the story that circulated the entire borough, it became a near-death experience featuring gallons of blood and broken bones protruding. From that day forward, even the toughest kids began double-checking the bolts on the front wheel, and the handlebars.

If school was good for anything, it was to provide us with the empty playground after school, or on weekends. There was nothing more preferable to me than playing schoolyard games during non-school hours. It was a way of re-claiming my independence permitting me to be the one to decide when recess was really over. Most of us would get together and play games on the school grounds. I can recall those hot summer days, going door-to-door spreading the word that a baseball or football game was going to happen on the school grounds. Though baseball and football were okay, they presented a problem. There weren't as many boys in the immediate neighborhood that were of proportionate size and age for either game. Therefore, we often had more fun with other games that could include girls as well as boys providing more kids.

Two teams made two lines of kids facing each other and holding hands.

This game was similar, if not the same as "Dodge Ball." Ideally, it was best to play it in a gymnasium, or a small empty room where the ball could bounce off the walls. In an open field, you ended up running after the ball so often it got to be boring. We only knew this game as "Prison Ball" and the rules were as follows:

Two teams lined up facing each other, separated by a dividing line. The object was to throw the ball at a member of the opposite team. If you hit them, then they had to go to "prison", a small area sectioned off behind your team. NOTE: When throwing the ball, it was best to use as much brute, destructive force as possible. No reason for it, just fun.

Gradually, one team tries to imprison the other to eventually win the game. If the first team misses, then it becomes the opposite team's turn. If a team sees an opening, they are supposed to get the ball their imprisoned team mate. If that prisoner can hit a member of the opposite team, he his freed. I can't remember that any girls wanted to play prison ball with us.

When I was younger, I was a regular Jackie Chan. I could jump high, twist around, drop to the ground then spring back up with ease. I weighed about 2 ounces, and I was tall. This was often frustrating to the older kids when playing prison ball because I was easily the last man standing, and the hardest to hit. I could-to coin a moniker-"dodge" any ball fired at me. Not only was I fast and agile, I was also a good shot, and could hit almost anybody. "Tag" and "Keep Away" were so-so games, but even though tag was an active game, it became boring fast. "Keep Away" became the pre-cursor to basketball, but it was likewise boring to me. In our neighborhood, the most populare games were Prison Ball (played inside the school building), and for outside, it was hide and seek.

Of course, hide and seek was never as much fun as it was in the summertime at night when spooky shadows from nearby streetlights provided more hiding places than the daylight ever offered. Hide and seek was the champion of hot summer night games. Still, even indoors, it was a great game and a great way to re-discover closets, garages, under beds, and other domestic locations that would otherwise go ignored. And wasn't just a pain in the rear when the "it" person gave up early?! I tell you, there was no justice sometimes. There needed to be laws for us kids then; people needed to be held accountable for their crimes of quitting games early. Perhaps jail time, no--more school time!

For me, football and baseball were polar opposites as far as popular games. Being the size that I was, I was never good at football. Plus, I don't know why, but football always bored me to death. It seemed like we spent more time standing around than actually doing anything. We'd move a few feet-bang-huddle up! We'd throw the ball, someone missed it-bang-huddle up! It seemed so slow moving that I couldn't get into it at all.

Even in high school when it was organized and actually an intriguing sport, I only played it after school with other guys. And then it became boring again. I was a marvelous power-hitter in baseball, and ran the bases at light speed, but I was the worst baseman, fielder, or catcher in the history of the game. If a flyball came at me, it dropped from my mitt. However, for some odd reason, I was great at catching grounders, even the ones that would hit a bump and bouce up to my face. I never perfected the art of sliding. I never needed to; I was so fast that my coach during practice made me run the bases twice with his stopwatch on me. He couldn't believe how fast I was.