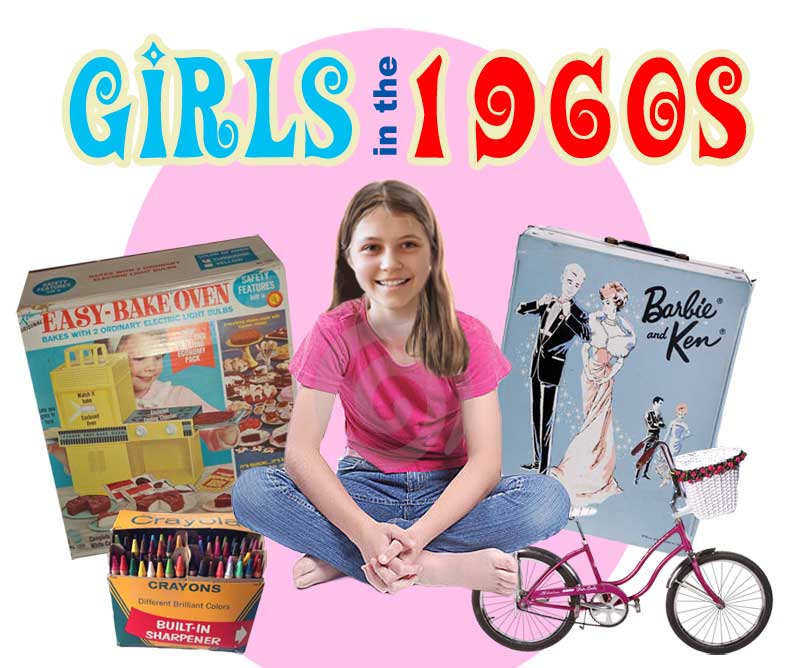 Growing up with Girls

Girls were indeed an interesting phenomenon. They were creatures of mystery that baffled, bewildered, and confounded us guys to no end. They had their own culture—and with the exception of Tomboys—they were really pretty much unaccepted in our manly circle. 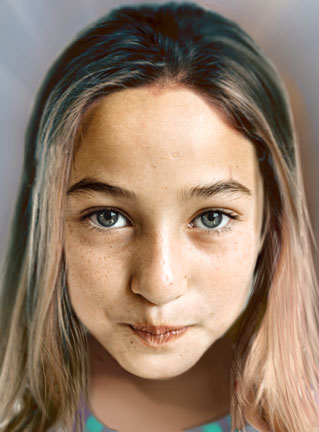 When they weren’t trying their best to get on my bad side, I always felt kind of sorry for girls; they were pitiful creatures who hadn’t the benefit of proper education when it came to military tactics or the building of a street go kart. Girls played with dolls and tea sets, and were unconcerned with the important things in life such as great model cars, toy guns that fired caps, or the quality of a decent headlock.

The girls I grew up with never built monster models, or stomped through brush with a plastic machine gun. Girls were an enigma; a puzzle with pieces that weren’t really needed to complete the picture; they were like unwanted house guests that arrived at the wrong times, stayed far too long, and you only appreciated them more when they left. When I was a kid, the word "girlfriend" was not permitted; it wasn't even thinkable.

A guy could be shot by firing squad if the idea or word "girlfriend" was ever mentioned. No matter how pretty they were, girls didn’t fit into our schema. They were complicated; they made life complicated, and they had to be talked into the things that we guys would do on the spur of the moment.

Girls did not engage in reckless activity for the heck of it, nor did they get into fistfights (well, most of them didn’t). They never had belching or over-eating contests. In short, girls were no fun. Though the probability of having a "girlfriend" was a secret fact that most of us guys had to live with, the idea was never verbally communicated between us unless, of course, it was delivered as a taunt.

Brat girls were the ones who tattled, kicked over your army men, or teased and stuck out their tongues on a regular basis. The bad girls were the enemies in our camps. There was no negotiating with them on any level. They were sneaky and not above name-calling, or constant hovering in “boys only” areas such as forts and secret hideouts. It was statistically impossible for a guy have a girl pal who was one of the bad girls. There was no trusting the bad girl; she could turn on you at any moment when her friends were around. 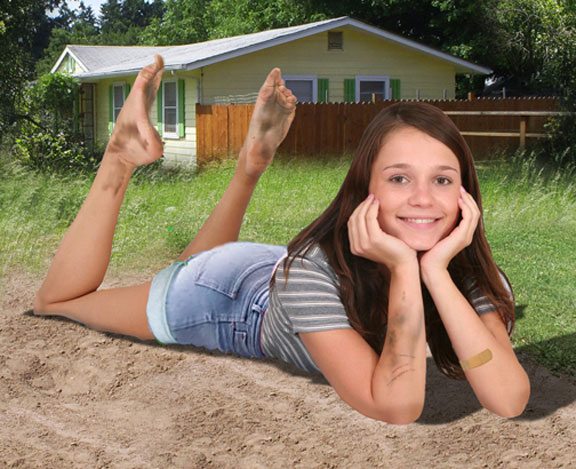 tomboys were both interesting and easy to figure out. There was no mystery surrounding them. They were girls who were just not interested in falling into the typical play-with-dolls girl mold. They were the girls who refused to accept their fate of wearing dresses and having tea parties on the front lawn. They preferred pants, wrestling, tree climbing, and copying—if not surpassing in skill level—everything us guys did. 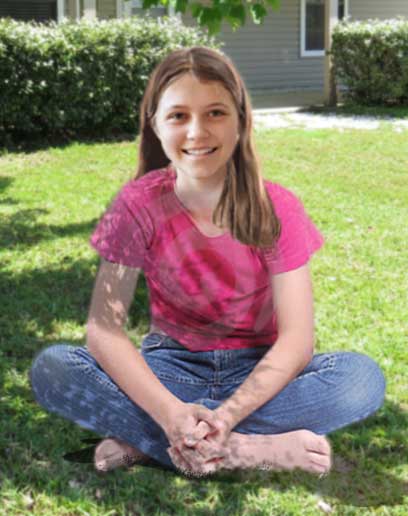 Tomboys were amazing creatures. There was one on almost every block. They could have been someone’s sister who could ride a bike like a master, wasn’t afraid of snakes and spiders, could out eat you at the dinner table, and often taught masterful cussing or belching techniques when out of adult earshot.

The only problem with Tomboys was that they eventually grew out of their boyish personality traits and went straight for the hair ribbons and dresses. It was the anomaly where all missing pieces of their genetic puzzle finally fell into place. There was no rhyme or reason, or specific timetable for this; it just happened like the change of seasons. Some of the Tomboys I knew who “defected to the other side” were greatly missed as intellectual partners and physical opponents. 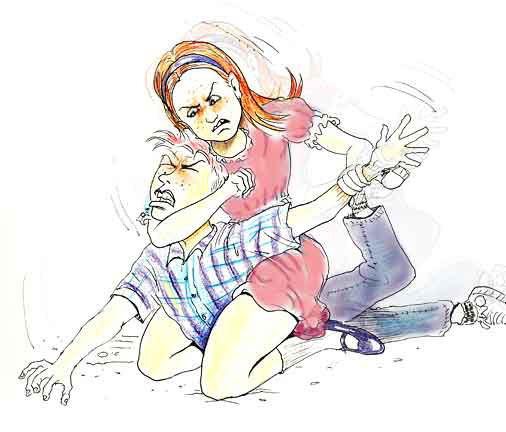 Dangerous girls were a very respected community of females. They were the girls that could beat us guys up! As pretty, and saintly, and winsome as they appeared, they commanded respect. Dangerous girls could out-wrestle or punch you in the face with the thrust of a jackhammer then return to jump rope as if nothing at all had occurred. They were as dangerous to the male ego as arsenic to the human body. Only a fool attempted to push, or out-fight one of them. Needless to say, they carved a place for themselves in our boy society in record time. Even the toughest guys on the playground avoided these girls; the terrifying "what if she actually beats me up in front of everybody?" factor was ever-looming.

Yes, the “what if” factor was a clear and present danger. You couldn’t let it get around that “Delilah Miller pounded you after school”, or that “Wendy Hutchins out-wrestled you on the playground.” Interestingly, these girls weren't aggressive or relentless psychopaths; they just defended themselves, their honor, territory, pony tails, younger siblings, or whatever else needed defending. I also shamefully concede that the dangerous girls were trouble we guys had to go intentionally looking for.

Nothing in the world was more maddening than having a girl decide that you were her "boyfriend." There was absolutely nothing you could do about it. There were no rules, no courts, no mediation, and no police to call; you just became “spoken for”. She'd show up arbitrarily on your doorstep, or assault you with a campaign of nightly telephone calls. These girls were relentless, and refused to take no for an answer. To make matters worse, your own friends would turn on you and enjoy your torment. 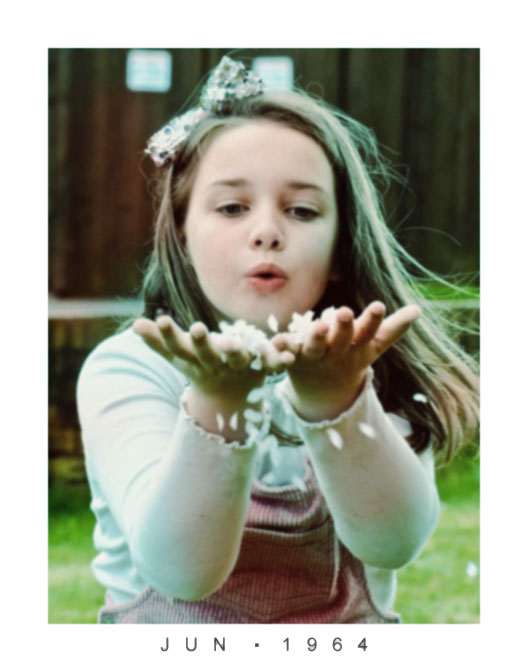 This condition was like rust, or ants: once either settled in, a guy had his work cut out for him. The “reverse-girlfriend” was the broken weld in the ever-complex kid infrastructure. She weakened the foundation with her relentless stalking, aggressive campaigns and prolific phone calls and visits. Making matters worse, my mom was absolutely no help when it came to this. She always sided with them “I want you to be nice to Cindy. She came over to just to play with you.” 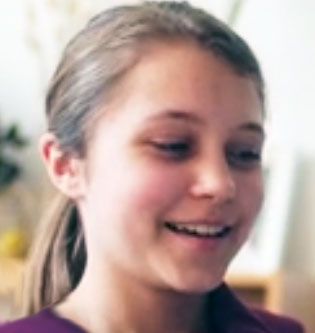 Eventually I grew to be a much wiser person and appreciate girls for all they had to offer. By sixth grade they were starting to look somewhat appealing, and by seventh grade, girls had become completely acceptable. As a boy growing up, I'd often considered girls. For all of their shortcomings, they were worthwhile, and, at times, good to have around. They made me feel heroic and were always on hand as an audience whenever I felt overly manly. As I grew older, I came to understand them more. The human female was a work of art; a tapestry of blond curls, dark tresses, eyes with window shade lashes, and smiles that stole my breath more than a good punch in the gut. By the time I’d reached eighth grade, I wondered why I wasted so much valuable time pushing girls away.