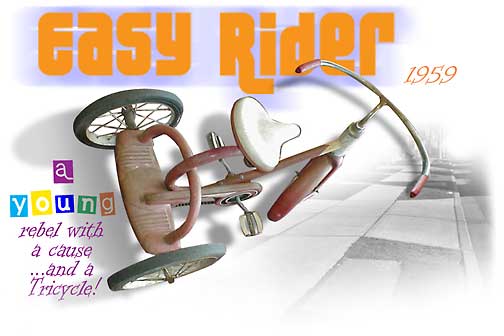 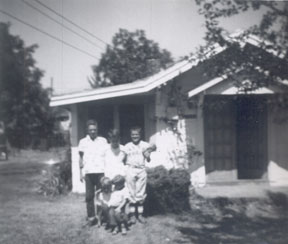 My family moved every year.

I don't know why, I guess my folks just had itchy feet. In any event, I went to a different school every year -sometimes two a year. I often returned to certain schools, but never in the same year. Needless to say, we also lived in different places and neighborhoods. What I'd like to try and do, is capture the flavor of growing up in my formative years of the sixties. The neighborhoods were quite a bit different back then; many had dirt, or gravel roads. We mostly lived in the area of SE Portland, but we did migrate to other neighborhoods as well. On theses pages rest ghostly apparitions; friends, family, teachers, and neighbors, all play a part in a world once probably as complicated as the days we live in now.

So, I'll try my best to describe a view of life as seen through the scratched lens of distant memories. The year was 1959, and my induction to life and the concept of society all started with the nightmare of Kindergarten...

Kindergarten was a weird transition for me. It was a time of leaving the house to be in a classroom with other kidnapped/stranded children. It was a time of crying for mom to come and get me. Kindergarten was the first truly social experience I had, and it took me awhile to warm up to it. I can still remember the classroom, the small set of tables and chairs, and the painting easels. The room was brightly lit and had lots of construction paper decorations everywhere. As rooms go, I remember thinking that it would have been acceptable had it been in my house.

Kindergarten was a time of structure and learning,

I didn't care for structure and learning; I really didn't care for it when it came to so many fun things to play with. Rules be damned, I wanted to paint with temperas! Oh, the smell of them once the jars were opened. I can still see the bright, bubbly colors, the blues and yellows and reds and greens. We painted on giant easels of newsprint, a surface with a quality just one step above toilet paper. There were other things that the teacher wanted me to do before I could paint. I had to learn to interract and play with others. Have you ever heard of such a stupid notion? I had to not only be nice to girls, but I had to play with them as well!

Now, if you're a five-year old boy in 1960, the last thing you want to spend even a shred of your valuable, non-nap taking time on, is girls. I had to learn to play house. Girls loved to play house. Fortunately for me, I ruled my household wearing the boots of a dictator. I was selfish with the monopoly money. I took no interest in household affairs. "You take care of it while I read my paper" was generally my attitude toward the activity. Had I known what divorce was, I would have begged for it. It soon became abundantly clear to the teacher that I was not interracting well with females. "You want cooperation? Then get me to that easel and open up the temperas!" It was quid pro quo; you give, I give. 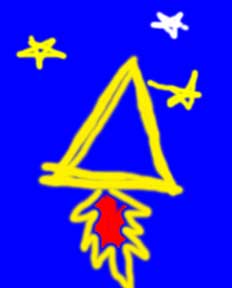 Eventually, I did find myself at the easel, and I painted a glorious rocket that I can almost remember vividly to this day. The background was the brightest blue, and the rocket was just a basic triangle shape. At that young age, I knew the step-by-step method of drawing stars. My mom taught me how to start at one point, criss-cross, then finish with a perfect star shape. That was pretty hot stuff!

So, with brush in hand, I was painting bright yellow stars in space. Reds, yellows, and oranges made up the fire coming from the rocket ship. The background was the deepest blue. It was bright and almost neon and soon became my favorite color. I can still feel the dried tempera on my hands and the feel of the big brush as I applied color and technique. I was so proud of that painting that I remember running home with it to show mom. She too was impressed. 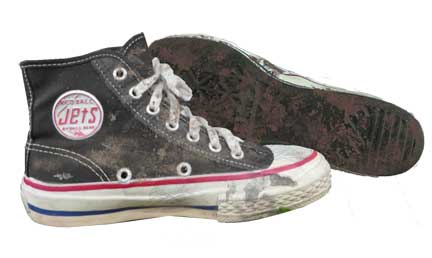 I also learned how to tie my shoes at a very young age. I was fascinated by the way the bow knot worked, and spent hours tying and untying my shoes. I'd untie my dad's workboots while he sat in his chair reading the paper. Over and over again, I'd tie and untie, then tie again. Step two on my incredible journey of shoes and knots, was learning how to lace shoes. That I also did at the pre-school level. In my latter years I taught myself how to make the laces run straight across instead of criss-crossed. My mother was quite impressed.