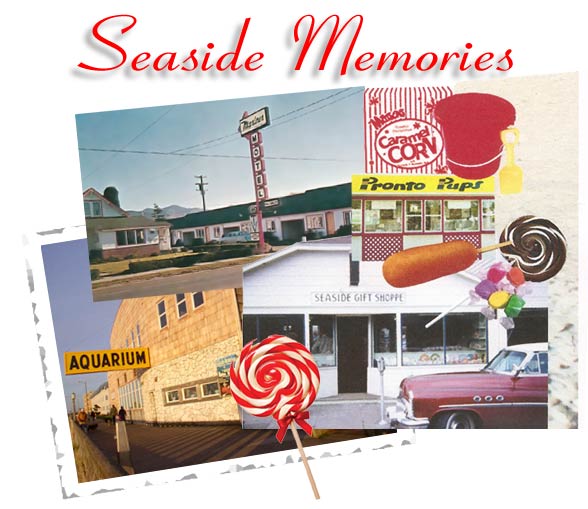 Among my greatest memories were our annual vacations to the beach and the greatest city of all:

Great things such Christmas, summer vacation, or our trips to the beach, always felt like they would last forever. The first day at Seaside, knowing we'd spend an entire week there, was the greatest feeling of all. Running out to the beach and jumping into the frigid waters of the Pacific Northwest coast were great times indeed.

Driving along Hwy. 26 westbound toward Seaside was a great adventure. Oregon is filled with rain forests, and they are plentiful along that highway. By the time we'd get within 5 miles of the ocean, the fresh biting scent of saltwater was everywhere. Along with the salty air was the excitement of what was to come. Checking into the motel seemed like a forever event when all I wanted to do was get down to the beach.

It was fun to build sand castles, or just play in the sand. I really liked the wet sand and how it moved beneath my feet making me feel like I was being pulled along. I thought it was really cool the way I could sink down just a bit as the shallow waves rolled in and smothered my ankles. In the distance were seagulls, circling and skimming waves with their wind-up cawing. Wood smoke from daytime campfires always reminded me of hot dogs soon to be cooked. The days felt like forever. I could lay back against a drift log, catch my breath and let the sun lull me toward ocean tranquility, then plan yet another assault on the ocean waves. Oregon coastal waters are notoriously cold, and whenever I jumped in, it was a wake up call.

There used to be a little beach side snack bar on the corner of the main drag. Just behind it was an amusement park that flourished with activity both day and night. When I was younger, I used to love the boats that floated in the water and went in a circle.

The early evening walks were the best, heading towards the turnaround, seaside turnaround or walking to the aquarium. Often I'd go to the aquarium and just watch the octopus and the lobster for the longest time. It was great being in the dark with all of these special creatures that lived beneath the sea. Afterward, I'd go feed the seals that lived up front near the gift shop. I loved the way they'd beg for food by slapping their fins against their chest, and making loud noises.

On the brisk summer evenings when the ocean was a soft roar and barely visible, Seaside was the place to be. Every night was fun, electric, and full of excitement. The carnival streets were alive, and the smell of batter frying and hot caramel corn filled the air. 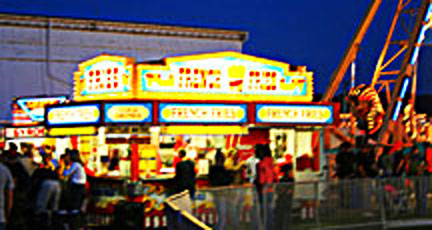 I recall the twisting metal sounds of the roller coaster, and the screams of girls as they clung tight to their boyfriends during the ride. The entire town was about excitement; people screaming, laughing, bells sounding and .22 rifle snaps in arcade air. The nights were wonderfully exciting as it felt like the entire world was at Seaside vacationing with us. In the distance I'd hear calliope music from the merry-go-round and more screams of people venturing on the more serious stomach-churning rides.

"Ride the Skooter" the sign on the wall read for The bumper cars. These were great fun, and so exciting that I just couldn't get enough of them. Imagine getting to ram somebody in a vehicle at top speed and not get hurt! For a kid, it's the dream of a lifetime. One could easily exhaust their entire fortune on bumper car rides.

Among the other things I couldn't resist, were the gift shop novelty items and plaques. 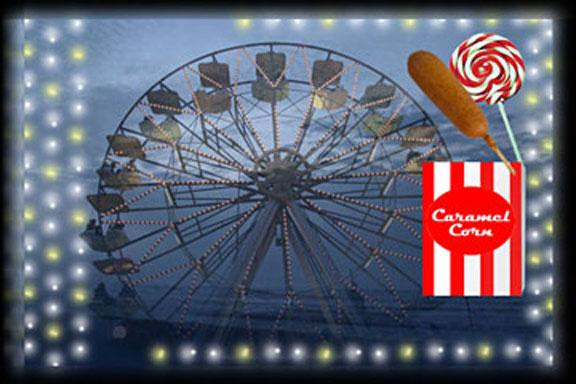 I loved the salty sea air, the night noise, caramel corn and the cold sand wedged between our toes for those of us who played at night on the beach under the lamp light of the turnaround. These elements elements and more were what we looked forward to once we'd exhausted our spending money. 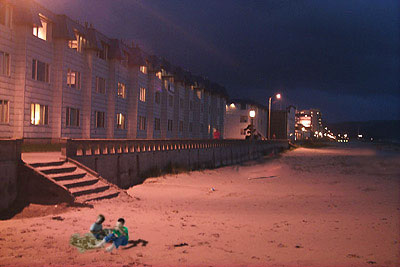 My brothers and I would sometimes build sand castles at night under the pale saffron glow of a street lamp. Still, roaming the city streets at night was the best. Each door I passed, something smelled delicious, looked exciting and sounded marvelous. Seaside was just one of those towns that hated to go to bed at night. I guess that's why I loved it so much. 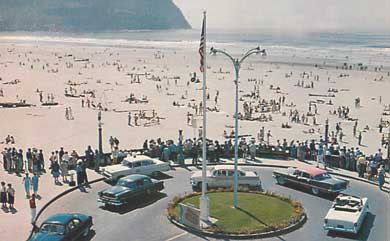 Come daytime the streets were bustling with a '60's motorcade of vehicles, horns honking, guys whistling at girls, girls waving at guys, couples walking hand in hand, and kids running wild everywhere. Seaside was as great place to be at night as it was in the daytime. Nothing ever got old, or tiresome, and when the city finally decided to put out its light for bed, I was pretty much ready for it. 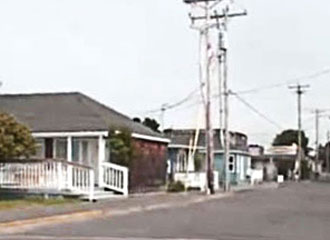 I loved those rustic old motels we stayed in; they were more like cabins and bungalows. The upside: they were old, yet new to us, and spoke of vacation and fun times every minute we were in them. The downside: there was no TV, and nothing for a kid to do at night. Sometimes we'd play board games-mostly Parchesi-or my parents would play cards.

In the morning my mom made us all breakfast, and we'd sometimes go to the neighboring towns and places to see what there was to see. The memories of all these things and places are very special to me, and whenever I recall them, I feel like I'm back there again, in that particular day and time. Cannon Beach was one of these places we visited with regularity. There were the remains of an old military cannon at the foot of town, that then, was fairly well intact.

The Peter Iredale shipwreck remains resting on the beach shore near Fort Stevens in Clatsop County. Over the years it has degraded, but it was fun to see as a kid. Fort Stevens itself was, and still is, a great attraction. Fort Clatsop is the actual fort built by Lewis and Clark where they wintered on the Oregon coast. The fort has since been re-built twice, and is maintained with re-enactments and tours which include musket firing and a lecture on what life was like there and then.

Still, nothing was better than Seaside, and for a kid, it was one of the greatest places ever to go on vacation. Ocean, sand, candy, caramel corn, rides, thrills, gift shops and more all encompassed the great Seaside experience. Whenever I think back on those days now, and how my dad always had money to give us to spend-even after we ran out of our own-and always provided us with such great fun, I get to missing those simpler days gone by.