1969: It Was a Very Good Summer
I, Landscaper
From Icee's to Black Lights
Girl Crazy
Music-WOW!
Run, Baby Run
The Berries of Wrath
Hit Songs of 1969 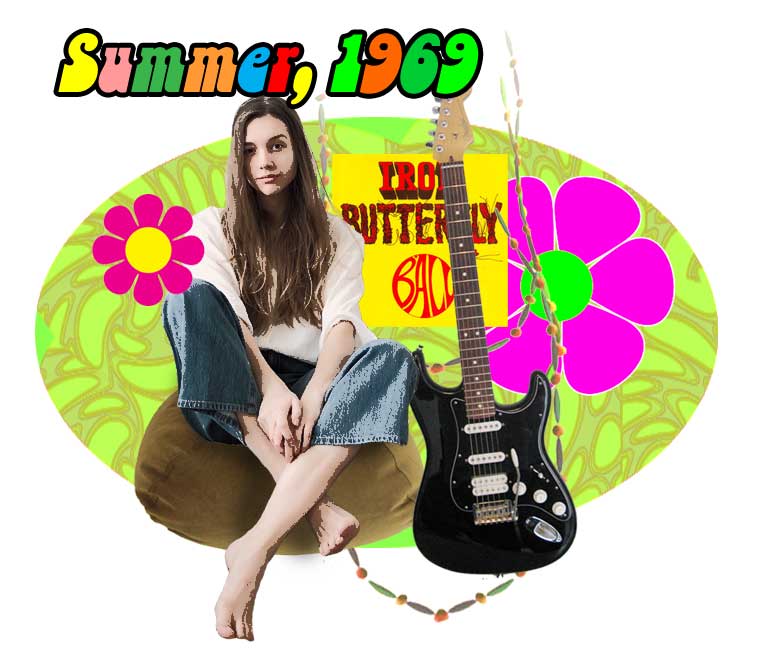 Before it was a big 80's hit single by Brian Adams, the summer of '69 marked the end of a great era. The events of 1969 were absolute proof that we, as Americans, really knew how to close out a decade. Truly astounding things happened, and I witnessed them all with belief, disbelief, wonder and, by summer's end, dread.
Gathered around the family television set on a scorching day in July, we watched men walk on the moon for the first time. The spectacle of it all was incredible. I recall listening spellbound to the strange audio as voices sounding as if they were emitted from a transistor radio reported their every movements. Watching the distored images were almost surreal yet it was really happening before my eyes.

The Woodstock Music and Art Fair in August, where an estimated crowd of 75,000 was expected, exploded with three days of love, peace and music. In reality, 300,000 showed up for the event. Woodstock filled me with a jaw-dropping sense of wonder. It seemed too good to be true to have so many great rock bands in one place for an outdoor festival. It was too bad it rained!

By summer's end, peace and love was shattered with the brutal Tate-LaBianca murders. A firm sense of dread gripped me as The Beatles' White Album was under the microscope because of its loose association with the slayings.

The Vietnam war played out on television every night. The news was always on at our house, and during dinner, we could glance toward the living room TV to watch the battle updates live on every network. The Vietnam Conflict had such a stronghold on the 60's, and though I was too young to comprehend the imagery, or the battle, I was fully aware of it when my brother went. The Beatles hit song "Get Back" was spinning on my turntable constantly. It was truly wonderful to have them back in rocking form after such a long period of sub-psychedelic and studio-refined hits. "Get Back" was a welcome return to traditional rock n' roll roots. 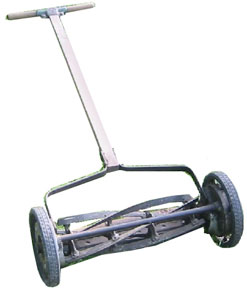 The summer of 1969 seemed to be one of the hottest and most active summers that I can recall. At the time we lived in the upscale neighborhood of Rockwood. I was earning money with my own "landscaping" business, maintaining yards for neighbors. My trusty push mower and I were always on hand to manage lawns, shrubs and newly seeded yards. By mid-summer I had steady clients. Some yards I merely mowed, but the most of them I mowed and raked, weeded flower beds, and did general cleanup.

Then, homeowners on vacation put me in charge of setting the sprinklers and some indoor duties like feeding pets, opening windows for fresh air, then closing and locking up again. One couple had me babysit and take care of their newly seeded yard; they left on vacation with only dirt, and returned with a nice start on a brand new yard. Sadly, over the years Rockwood has witnessed an incredible decline, and has now become a slum area.

During this summer, I was into everything psychedelic; this included black lights, trippy posters, and the constant battle between my parents and I over having long hair. At this time, they refused to let me look like "some hippie freak", so my hair was always cut short. I had to visit the Montavilla Barber College about every six weeks for my mom's favorite guy-cut the "Ivy League". 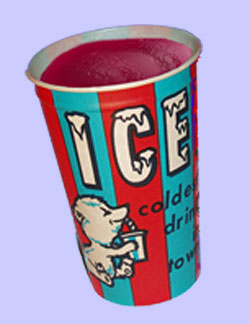 One of the newest innovations to our neighborhood was a Plaid Pantry store. It was new, so it was therefore a thrill. One of my favorite Plaid Pantry items was the "Icee". For anyone who is unfamiliar with these, it was a flavored ice-blended drink that the latter competing 7-Eleven Store copied, theirs being called a "Slurpee".

Black lights were very cool, though in 1969 in my neighborhood, black light posters were in short supply.

I often made my own posters with either felt pens or florescent paints.

Colored light bulbs were yet another amazing discovery; the posters I drew or painted looked great under a red light bulb. The red bulb was the only one worth using. The yellow and blue bulbs only provided weak muted light, but the red bulb was more psychedelic looking. Peter Max was a newer artist on the scene whose style was unique and imitated like crazy - especially by me! For awhile, everything I did was in Peter Max style. 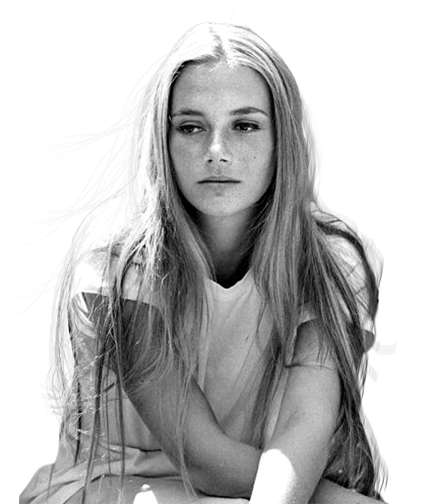 ♥ Girls fully registered on my radar by 1969. The hit TV show "The Mod Squad" had me (and probably every teenage male within rabbit-ear distance) in love with Peggy Lipton. By the next year, I'd be out of love with Peggy, and enrapt by a newcomer named Cybil Shepherd. There were a few girls in our neighborhood my age, or close to it, that were also very inspiring. Dress codes were still rigidly enforced at school and hip styles ruled. Girls still had to wear dresses and skirts, but they were far more interesting than they had been in the earlier years of my schooling.

Styles were changing for the better (in my opinion), and girls began adopting the "hippie" look that would triumph in the 70's. Still, try as they may, girls still couldn't compete fully with the music, and as a result, the two sort of merged together in my level of estimation. Essentially, girls and music shared the same level of enthusiasm. Needless to say, girls on TV held my interest more than they ever had before, and I was falling in and out of love on a weekly basis with many of the female stars of television.

Music was the catalyst that drove me toward any teenage ambition I may have had, and at the helm were The Beatles. They always had the lead in my musical repertoire. The second place runners-up to The Beatles were Steppenwolf. My very first hearing of "Born to Be Wild" in 1968 marked the day I was spellbound by the electric guitar. Steppenwolf marked the era of musical change for me, though bands as good as they were seemed in short supply. Other musical influences were the relatively new-to-me Led Zeppelin whose release of "Led Zeppelin II" was so miraculous that I wore it out quickly. My theory was: if you didn't have a skip on your LP, you just weren't playing it enough.

Another heavy hitter on the scene was a band called Grand Funk Railroad" who eventually went on to 1st place knocking The Beatles off that heralded top tier position. I won a $10 gift certificate to a hip clothes store called The Answer by being the first caller to the radio station and identifying the song "Heartbreaker" by Grand Funk. 1969 was like a musical portal where wilder and more eclectic trends in performance were launching new musical styles skyward. The music was getting heavier and louder, and I was loving every moment of it.

The previous year saw the release of the world-changing monster release of "In-a-Gadda-Da-Vida" by a group called Irong Butterfly I wore out this vinyl masterpiece as quickly as I did the first album by Steppenwolf. 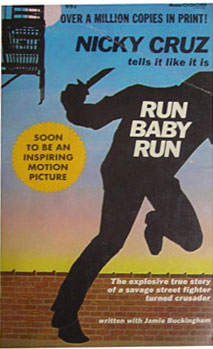 Wow, finally a really cool book! One of our Christian neighbors introduced me to "Run, Baby, Run". The author, Nicky Cruz, was a former gang member who'd risen to the ranks of leader of a ruthless NYC street gang called "The Mau-Maus". Cruz eventually became a born again Christian and famous evangelist. His crusades in the sixties and seventies were legendary. The book was far more fascinating than I expected until the second half when Nicky's religious conversion stole from the excitement and thrills of gang fights and danger.

I read another similar book, (sans-religion), called "Durango Street". Soon, I connected with books. "Durango Street" led to others, and, by the time I'd entered high school, I was a much better reader, with a more extensive vocabulary than many of my classmates. By 1970, I was pouring through the best sellers including the likes of "Love Story", "Summer of '42" and "Midnight Cowboy". Though my grammar was atrocious, I had a way with words, thought organization and could describe things, places and events with more flavor than most kids my age. All I ever wanted to do with this skill was write songs. I never did. 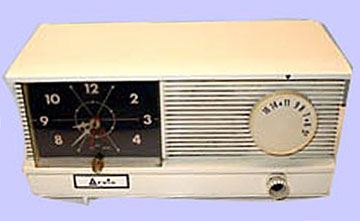 For my birthday of '69, I got an AM clock radio. This was the perfect gift as very little was more intriguing to me than the new music drifting across the airwaves. The mix was rather eclectic, and a little more pronounced than the songs had been in the earlier sixties. With the emergence of new bands from the 1966-67 eras, musical styles were explosive. Psychedelia was planting its roots a little more firmly as more bands were sporting female lead singers, wild clothing and hair styles, and more complex song writing techniques. In essence, 1969 was a great musical wave, and I was thrilled to be riding it. Below is a list of songs that I was listening to not in the top ranking order, but in the order that I remember them.