"Don't Go Near The Anderson House" 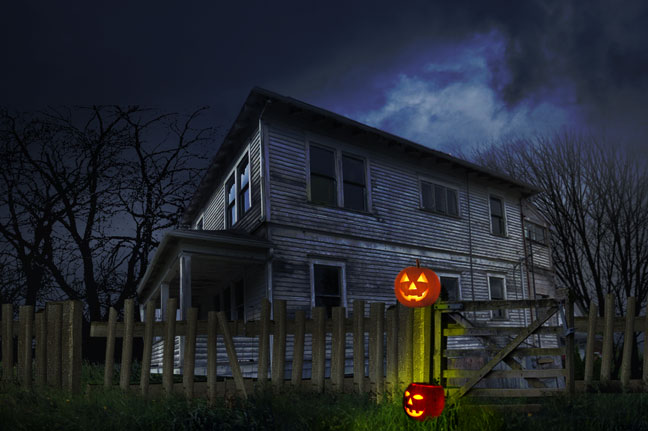 It was the Halloween of 1962 that I went as a hobo. My Dad burnt a cork to use for my whiskers, and my Mom made me a "hobo bundle" to carry over my shoulder. Trouble was, I had to carry that bundle and my Halloween candy sack. We’d eaten earlier, before my dad got home from work, so we’d be ready to go out soon after he arrived.

We spent a fair amount of time gearing up for going outside and heading off into the dark unknown; At first, the streets were filled with kids and parents tagging along. To this day, I can still hear the familiar voices that echoed such greetings as: "Oh my, what do we have here? A mummy? Oh my!" or "Who is this behind this ghost mask?" This was all part of the ritual. It was normal and to be expected. However, venturing out farther, where streets weren't as familiar, was what the real thrill of Halloween was all about.

This is the part where my brothers or my friends all dared me to trespass the property of the most dreaded house on the block. These "haunted houses" were always named after the residents who haunted them. In our neighborhood, it was the "Anderson house". It rested just off the bumpy dirt road about 4 blocks away from the school. I remember on that afternoon that the sky was a deep gray with nasty looking clouds. It was very windy, and of course, such ambiance made for a perfect Halloween day.

Once our sacks were safely full of candy, I remember venturing toward the Anderson house while my brother narrated all of the evil and horrible happenings perpetrated by the witch that lived there.

Old lady Anderson was a witch, or at least, that was the legend. As I grew older I realized that she was just a quiet old woman who lived alone. Unfortunately, she was the perfect fodder for childish rumors of witches and ghostly happenings. The house seemed fearsome and dreadful in the daylight, so after dark, its presence was pure evil. It was cold out, and the wind whipped our pant legs from one side to the other. Stars were obscured by clouds, and the only light was that of a few street lamps. Ghostly things live in the shadows, (this is true, look it up), and we were just scant feet away from negotiating the very threshold of terror.

At first we hushed; there was no sound except for the wind rustling October branches. Fallen leaves scraped across the ground like animated dead things. At such a young age, it hadn't occurred to me that if my brother was so brave, why was he standing right next to me? Better yet, why did my friends all dare me to go to the porch? Why didn't any one of them go? The answer was simple, a dare is a dare, and daring your friends into doing stupid things was what kids did for a living.

So, the time came to either get brave, or chicken out. I walked a bit closer to the dead grass that played host to the evil edifice. An old rusted mailbox leaned to one side. I could hear my tennis-shoed feet crunching the gravel as I neared the property. The porch was wooden, and only one rickety step led to the door. The wind was creaking the screen door on the front porch and there were no lights on anywhere. The house, I'll admit to this day, was creepy, but it was just a house badly in need of repair.

I moved across the lawn as carefully as a solider would traverse a mine field. Suddenly the wind kicked up; it blew the screen door open, then slammed it shut again! We all scrambled, running for our lives in fear of the witch who could reach out and grab us before we reached the safe haven of the street we lived on. It had to have been she who made the screen door slam. It was a warning to us all to go away and never come back. We never did.

The only thing that followed us home that night on that dark, dirt road near the Anderson house was the memory of what we wanted to believe. Halloween just wasn't the same without the horror, the terror nor the demented curiosity of the neighborhood haunted house. I, like many, kept my terror alive through memories and distorted re-tellings. Yes, those were the days, and I miss them every year come Halloween, and I think my favorite memory is of that old house on that old dirt road, and the Halloween of 1962.