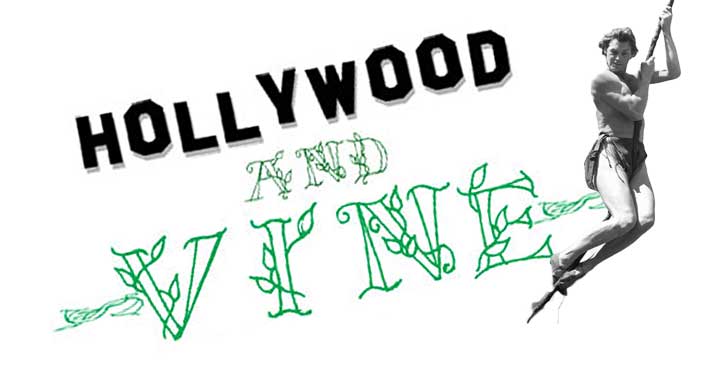 Hollywood had a very successful run with its series of "Tarzan" movies from the dawn of celluloid, myriad remakes and stars and eventually, the sixties television series. As a kid, I was completely enthralled by the character and watched everything I could about the great jungle lord. The Johnny Weissmuller Tarzan inarguably redefined the character, and soon became my favorite actor to play the role. In fact, catching his movies on our local TV channels made Weissmuller my only choice for Tarzan. I watched Johnny with extreme prejudice, ignoring any other movie, or actor that played Tarzan before, or after. There was little in life that was more fascinating than seeing Tarzan swing through the jungle on a series of long vines, or watching him swim underwater in deep lagoons of clear water.

One fine spring day, when the smell of fresh cut lawns reaffirmed my faith in the world, my best friend Jim called me up to tell me that he had found a vine to swing on! No kidding! An actual vine, in a tree, and we could swing on it like Tarzan. News like this should surely have pre-empted anything on national television, but sadly, it was only breaking news to me.

Dressed in Levis, white T-shirt, and a pair of black Keds Hi-Tops, I practically raced the ten blocks to his house. Jim was already outside to greet me. In his front yard were two mighty evergreens that appeared to reach up and grab the sky. I'd never paid much attention to them before, but now that they were the gateway to high adventure, I saw them with new eyes. The trunks were strangled with ivy.

Jim had managed to weave out a singular, healthier strand of ivy that was to be the heralded swinging vine. Try to understand my disappointment; this was not a swinging vine. It didn't go anywhere. It just hung there, lifeless, without purpose, completely uninviting. My first thought was "you called me away from the TV and the comfort of my room for this?!" In fact, I believe I uttered words similar to that. Jim, always the optimist, was convinced that we could make a great Tarzan vine out of it. So, we worked on it, maybe for a couple of hours until we realized the futility of it all. The vine was just a main artery to a more complete being: tree killing ivy.

Eventually we collapsed onto the needly grass of his front yard, feeling defeated. It was an idea (not great) but an idea just the same. Perhaps in his mind it had some merit. Was the vine strong enough to support our weight? Oh yes, most definitely, it just didn't go anywhere. So, what's the point of this story? Where's the blood, the action, the high jungle adventure? Unfortunately, there is none of that to make it compelling. All that was truly gleaned from the idea of the "great Tarzan vine" was the fact that we were both together and ready for the next adventure (It was always best not to dwell on the heartbreak of failed projects; one must move on).

Shifting this story to a new location, I take us to the Joseph Lane School gymnasium. This new fleeting adventure took place during school hours. Lane School was the only elementary school I'd ever attended that had honest-to-goodness climbing ropes that hung down from the rafters of the miles-high ceiling. Students were forbidden to do anything on these ropes but climb, and only one boy at a time under teacher supervision. Needless to say, swinging on these ropes was an illegal activity forbidden and shunned by the school staff. Such an act promised swift and gory punishment to anyone who dared swing.

On an ordinary weekday, suffering from boredom, tired of doing treadmills and jumping jacks, I needed an infusion of excitement. Jim's previous "vine adventure" had fallen flat on its face. It wasn't good enough that earlier in the day Steve Jensen got punched right in the nose by Mark Colley during third period and it bled like crazy, and both had to go to the Principal's office. It also didn't matter that the cafeteria was serving wiener wraps and Tater Tots for lunch. I needed more.

In gym class, the teacher left the room for a few minutes (on whatever business it was that drew teachers from their rooms back then). I must have gone momentarily insane. Our teacher instructed us to team up for basketball until he returned. I saw a moment, a chance. I quickly abandoned rules and school regulations; onward and upward I dashed with my one chance at jungle excitement. I broke and ran as fast as I could across the great plains of the wooden gym floor. I jumped onto a rope and I was free! Perched upon the massive knot tied at the base, I saw the world go by at oblique angles and swift speeds. I was swinging, and I mean swinging! I didn't know they could go as far as they did.

Once was not enough. I had to do it again. The other guys watched, mostly warning me that I'd get in trouble. I didn't care. Springtime brings out the rebel in a guy. Upon his return the teacher was angry, and like Steve Jensen, and Mark Colley, I got to visit the great dungeons of the grand inquisitor known to us boys as the Principal. That day, he was in an unusually sadistic mood, and gave me a harsh punishment: I had to go to the school library and pick out a book, read it, then write a report by the end of the week.

It was a highly cruel penance. How in the world was I supposed to read a whole book by the following Monday? It would cut into my TV time for sure. After school fun? Forget it; I'd be inside droning over pages of meaningless type. Not only that, I also had to write a report on it! Just for swinging on the ropes? It wasn't like I killed somebody, or took cuts in the lunch line, or stole an extra milk when the server wasn't looking. All I did was swing on a lousy rope.

The book I picked out was called: "Lad: A Dog". It was thick with far too many pages to read, but it had a Collie on the cover, so I grabbed it. At least I didn't have to tell my parents about it. They'd just think I was doing homework. I made myself as comfortable as possible on my bed surrounded by army toys and monster models. If I had to read this stupid book about this stupid dog, I may as well get started.

To my surprise, I enjoyed reading it. It was not a stupid book, and Lad was not a stupid dog. It was my first ever beyond the readers we used in class. The Principal's cruelty was shrewd as he forced me to actually love books and reading. I ended up checking out The Hardy Boys Mystery "The Secret of the Old Mill" after finishing my mandated novel.

All I can say now is Well played Mr. Principal, well played.