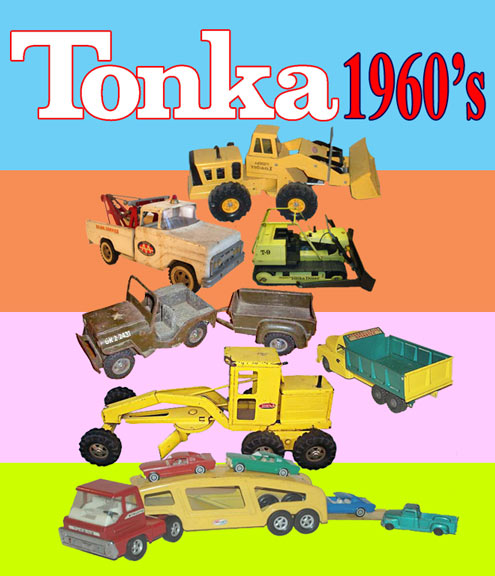 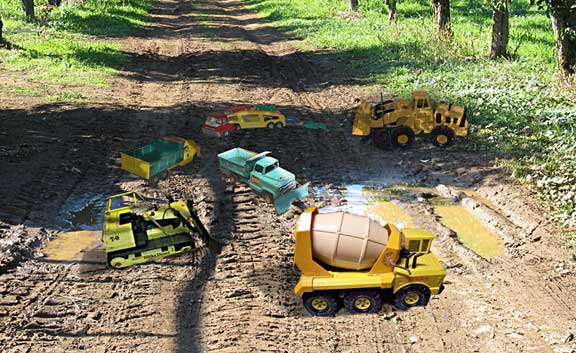 I couldn't believe how utterly amazing Tonka trucks were! The miracle of mud, the divinity of dirt, and the solidarity of us guys on a hot summer day with grit beneath our nails, and big wheels a rollin'. This was the wonderful world of Tonka Trucks and the true meaning of "heavy metal".

For the record, I did not own one single Tonka truck. They were far too expensive for our household, and I usually went for army toys instead. (I did have the largest G.I. Joe collection for blocks, so I figured it all evened out.) Besides, most of the guys on our block had more than their fair share of these dinosaur trucks, so Tonkas were never in short supply. My favorites were always the road equipment. 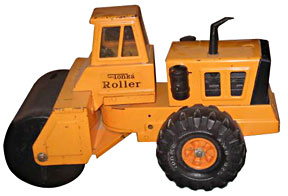 It was great to set up in a dirt road somewhere, or even in someone's gravel driveway and begin construction. Often we'd wet the dirt with mom's garden hose to create the most sloshy construction site of all. The scent of wet dirt and dust and the heat of the sun bearing down on the metal of these rugged vehicles only brings to mind the freshness of my memories when playing with these. Moms worked hard keeping cold Kool-Aid in the fridge for when that work whistle would blow.

My favorite feature of all was that these were working trucks. They earned their keep. They had levers that operated things. Dump beds would raise with the turn of a handle; cranes with clam-shell scoops would unearth soil, and caterpillar and road grader blades moved up, down, and side to side. 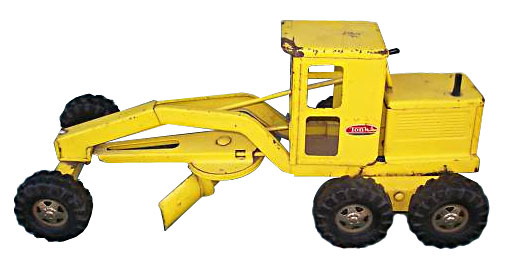 In everything that I've ever read, or heard about these amazing metal wonders, I haven't once seen the most important factor of all: these toys were highly educational. They made us guys think about moving parts, construction, how things work, what type of jobs a man could get driving these things in real life, and above all, what purpose they served. There was a great learning curve that came factory installed with these toys.

Immediately they were flipped upside down to see how they were constructed. We asked our dads why they had two rear axles, and why blades were so long, and so on, and so on. And dads seemed equally interested in them, taking an interest in answering the question since most dads worked in some capacity near, or around such equipment. 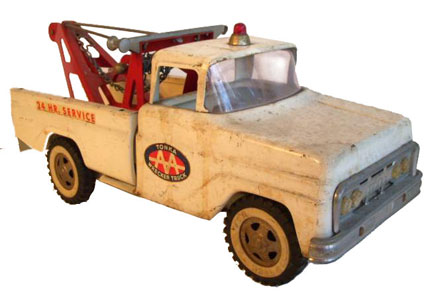 I can recall a neighbor kid who had this tow truck. I always thought it was one of the greatest things ever. I'm not sure why, but probably because of the red light at the top. Of course, the tow bar on the back was cool too. The Snow Plow and the Dump Trucks were among my 4-wheel favorites, but there was nothing that could equal the magnificent road equipment like the graders and cats.

Another up on the roster of all-time favorites was this army jeep and trailer. We used to put soldiers in the jeep. The soldiers were too small but, we could still pretend.

Pretending was free, and more than that, it was convenient. Pretending provided wonder; to be able to imitate that which wasn't real, then making it real was all that really mattered.

Even the name sported a rugged sound. If you were a kid growing up in the '50s and '60s, Tonka would be as common a name as Ford or Chevy.

"Tonka" was taken from the name Lake Minnetonka in Minnesota, and would be the eventual name that the metalcraft giant decided upon. Three guys, a machinist, an engineer and a car salesman founded a company called Mound Metalcraft named after their hometown of Mound, Minnesota. Their plan was to manufacture garden equipment such as rakes and hoes, etc. 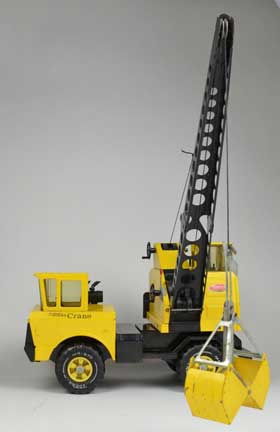 Beginning in the basement of an old school, they acquired a tooling company which gave them their first jump start toward a heavy metal future. After some experimentation, one thing led to another, and before long they were manufacturing steel-pressed toys. Semi's, trucks, tractors, cranes, road equipment and other vehicles became the new product.

After selling thirty seven thousand toys in the first year, garden tools no longer seemed the thing to produce. The company changed its name to "Tonka." In 1965, Tonka produced their most famous piece of road gear: The Mighty Dump Truck. This toy was big enough for a kid to ride in, but even larger than its size was its volume of sales and durability in the market. The Mighty Dump Truck became Tonka's largest seller all the way up to the end of the century.