The Hunchback of Notre Dame

It was November of 1964 and freezing cold outside. We'd gone to our local Pay N' Save store at Eastport Plaza (for what, I can't remember). I'd wandered into the toy section-as usual-and happened upon the shelves of models. There he stood, like Aurora's royal ambassador of modeldom, beckoning me to take him off the shelf. "The Hunchback of Notre Dame" was my first adventure into the marvelously hypnotic world of Aurora Monster Models. Though these kits could be purchased for only ninety-eight cents, I won't attempt to shrug off the fact that a dollar in 1964 was a grandiose sum. I was excited, beyond any possible description, to be hauling this beautiful monster kit to the cash register.

More blissful than this mysterious figure, were the remaining Aurora monster kits that surrounded him. I was in a state of hypnosis, so much so, that I reached up with bare fingers to caress each box. The feel of cellophane and the muffled rattling of plastic pieces like old bones in a cardboard crypt were far too beautiful for eight-year old comprehension. The sound was a mysterious symphony to my ears. The look of each box, with its narrow design and strikingly rendered artwork was alluring. The magnificent artful portraits of the creatures inside were testimonials to the beauty of models and the sheer ecstasy of monsters. The coming New Year promised to be a great one, with all of my future allowances already spent.

Building the Hunchback was a bit of a trial. This was a difficult kit for me to put together. I had no real experience building models before with the exception the Wierd-Ohs" edition of "Daddy, The Way Out Surbubanite" when I was in second grade. The pillory was altogether difficult to make fit on its pillar, plus the wrist chains didn't want to fit into the eyelets of the pillory.

But I do remember having hours of endless fun with this model, building, painting, and living in a world of wonder, for hadn't yet seen any of these monsters on the television screen. 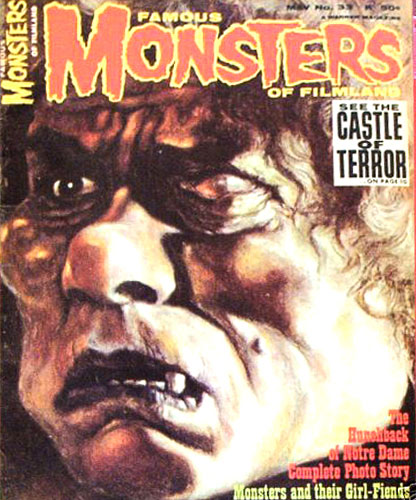 I spent hours combing through my Famous Monsters of Filmland issue that featured the Hunchback. 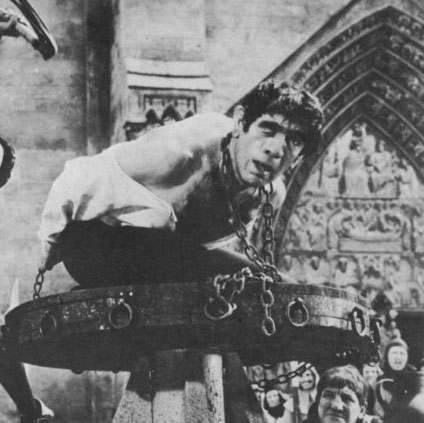 I remember reading about Anthony Quinn's Hunchback, and how interesting the character of Quasimodo was as a whole. Interestingly, as time went on, Anthony Quinn was not happy with his likeness being used for the box art, and the art was eventually changed for later releases. Even more strange is the fact that I always thought, (and still do), the sculpted face of the Aurora Hunchback resembled Charles Bronson's demented deaf-mute in "House of Wax."