The Phantom of the Opera

On my dresser, the box gave me the creeps; he was terrifying, and after having just built him-complete with the mutilated prisoner in the dungeon window-I could only imagine his menace. "The Phantom of the Opera" was my favorite of all the Aurora models. On a Saturday afternoon our house was warm and toasty, and a welcoming contrast to the frigid cold of early December. The sounds of an Abbott and Costello movie playing on our black and white set filled my ears. Occasionally my brothers would get up to adjust the rabbit ears for a clearer picture.

I was spread out on the living room coffee table that had been covered with newspaper. Mom insisted that I put paper down to cover the floor beneath me as well as I prepared to go to work.

With a paring knife, she sliced an opening in the plastic shrink wrap so my fingers could get under and tear the rest of it off. I had to shake the box a bit to loosen it enough to open.

Inside, an array of shiny black pieces held The Phantom. Also inside was a neatly folded instruction sheet that told his story. Oh, for that smell of paint thinner and the enamel paints that stood ready.

Over time, my impatient fingers could barely wait for the paint to dry before following the next step. Once in a while I could spot a restless fingerprint in the paint, and had to retouch it. There are so many wonderful memories attached to these kits: painted pieces sticking to my fingers and the newspaper; glue hardening on my fingertips; Mom yelling at the boys to turn the TV down; How glorious it all was.

This model was one of Aurora's finest moments. The box alone terrified me. The Phantom had probably the best base of all time. I always considered this one to be two kits in one. First, you had the Phantom; then you had the 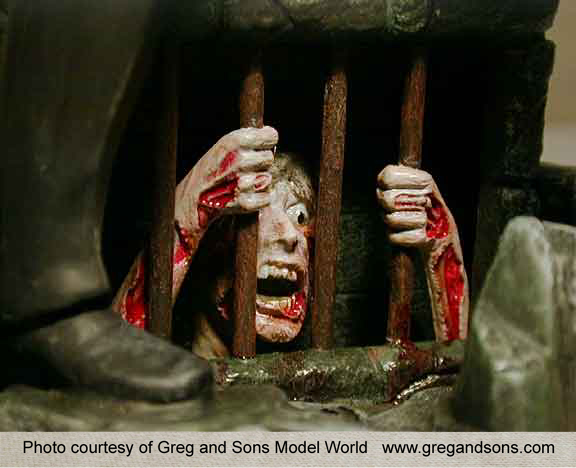 below on the base. This kit took a long time to build. Also, the box cover rendition of the Phantom bears an incredible resemblance to James Cagney's portrayal of Lon Chaney's Phantom in "Man with a Thousand Faces."

I think that this kit could easily be the number one favorite of most Aurora fans out there. When I was a kid, my vocabulary was limited. So, learning many new words from these model boxes-and the accompanying instruction sheets, was a new experience. I had no idea what an "opera" was. Again, the word sounded scary to me. It brought to mind gothic images of dark brooding hallways and dank dungeons. I also had no idea what a "phantom" was either. So, putting these two words together gave me more fright terminology for my monstacabulary!

Again, not having seen any "Phantom" movies, I was at the mercy of my own expectations and imagination. However, after having seen the 1942 Claude Rains version, I was sadly disappointed. The Hammer version was much more entertaining for me, but still, it was long on singing, short on monster.